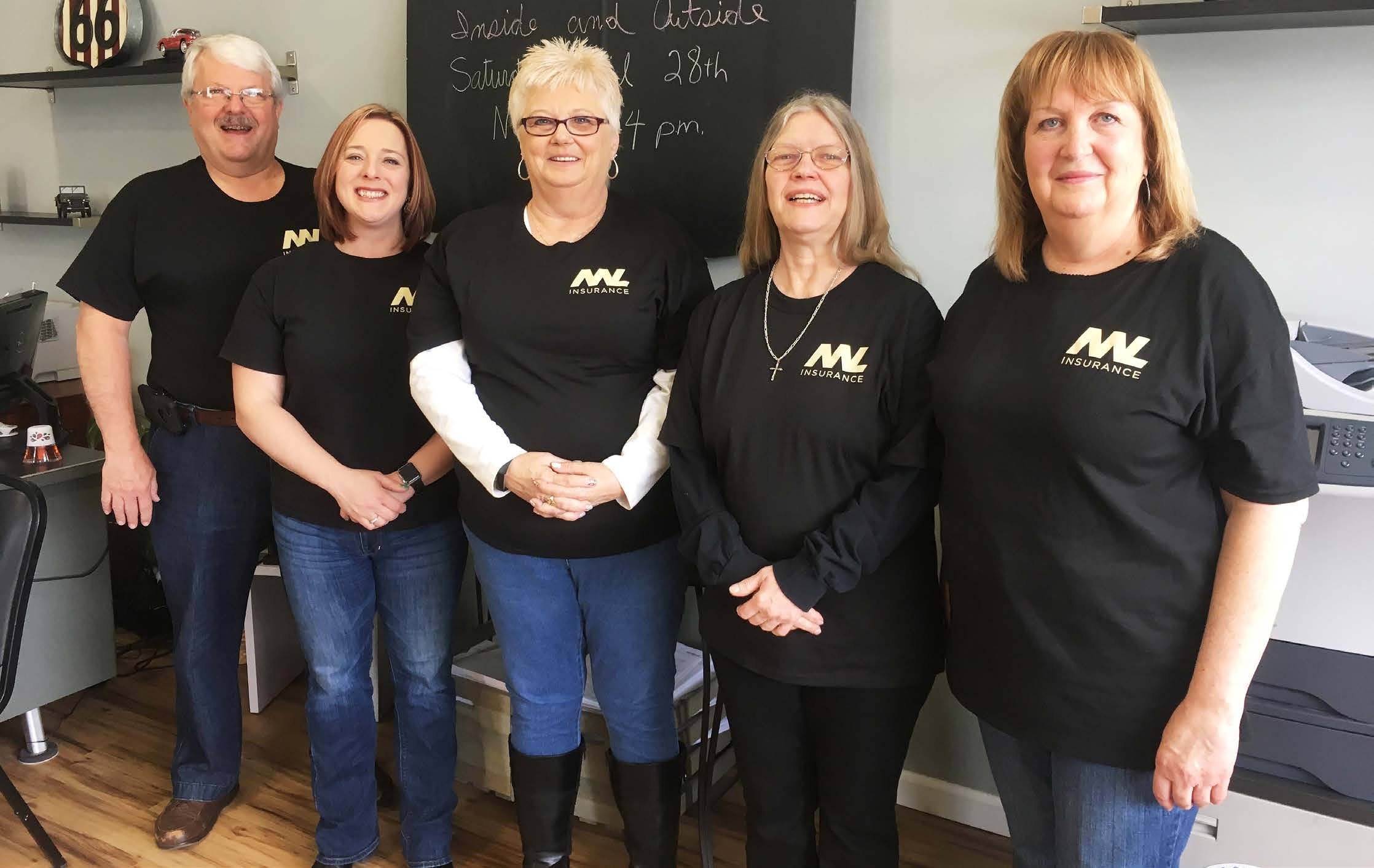 By DENNIS GRUBAUGH
GRANITE CITY — Christy Lexow has put heart and soul into her insurance agency, not to mention an old Corvair hood, license plates from every state and other, conversation-creating pieces.
With a lot of help, she spent six months remodeling the offices of Maryland Moats Lexow Insurance Agency after she acquired the facility in 2017. What builders found were some hidden treasures — to which she added some treasures of her own.
She held an open house April 28 to debut the changes at 2166 Pontoon Road in Granite City.
Lexow, 36, acquired the agency and the building in March 2017 from Ken Moats, who retired after more than 30-plus years in the business.
Maryland Moats Lexow is a brokerage offering policies for auto, home, business, workmen’s compensation, general liability and more, working with 30-plus insurance carriers.
Lexow owned C. Lexow Insurance Advisers Ltd. for 11 years, before the opportunity arose to buy Moats’ business. Moats reached out to her after talking to a mutual acquaintance. Lexow was a longtime part of the Lexow Financial Group, her family’s insurance and financial advisory businesses in Edwardsville.
Her father, Larry, has been instrumental in helping her with the transition. He general contracted the work and said the structure needed a lot of updating.
“The building is solid. We basically gutted the inside and started over with electric, plumbing, heating — it’s all brand new,” he said. “We didn’t know the steel mill was going to start back up, but it was good timing. We feel it’s a great location.”
It took staff a bit of time to get used to an all-new look.
“This whole room was paper, nothing but files from floor to ceiling,” Christy Lexow said, referring to what is now her office. “We went paperless and remodeled the whole place.”
During the renovation, the Lexows discovered some unique history, including a long-forgotten window and historic glass blocks found upon the removal of some paneling. Some of the glass blocks had bullet holes. The blocks date to the late 1920s/early 1930s. The original paned window had “Maryland Real Estate” on the glass. The window, though, had to be replaced. Maryland is the name of that neighborhood in Granite City.
The history of the place goes along with the staff, Molli Beck, Debbie Householder and Jan Bain, who have each been there many years and who have stayed for the transition.
Beck said the building was built in the 1920s and was an insurance office or realty office from the 1930s. In the mid-’60s, businessman Kenny Rapp bought the building and created Maryland Insurance Agency. He owned it until 1985 when the building and business were purchased by Moats, a local farmer.
Lexow, her staff and her customers have added a number of personal touches to the office, including some antiques and hand-crafted extras, one of them a 1963 Chevrolet Corvair hood resurfaced in chalk paint. The hood hangs on a wall facing the entrance and contains messages for visitors to see when they enter.
For an insurance agency, there is a lot to look at. In one corner of the front office is a 1905 wooden cash register — still in working order. On a top shelf in the kitchen is an antique toy fire truck — Larry’s from his childhood days and one that his daughter also enjoyed.
A miniature Texaco gas pump sits on a table made in part from an old steering wheel — the very steering wheel that Christy Lexow admits to once getting stuck behind when the seat locked in a 1968 Ford F100 truck she’s been restoring. Once she was freed, she vowed not to repeat the mistake. The steering wheel came out and now it’s the foundation for the table.
“My husband is a steel fabricator and a welder,” longtime staff member Molli Beck said of her spouse, Kendall, explaining some of the unique creations in the office.
Also on display are a 1940s’ era Willies Jeep grill, motorcycle license plates and Harley-Davison handlebars. Harley items also decorate an office bathroom.
A conference-room table with a glass top sits on welded wheels from a 1931 Model A Ford. The table is surrounded by metal chairs pulled from an Alabama salvage yard.
Sports and speed limit signs, a working popcorn machine and a late-19th century coat rack also are sprinkled about the building.
Many of the attractions reflect the things they insure, including classic cars and motorcycles. The agency also provides full commercial and liability coverage for all types of business owners.
Lexow Financial Group has its roots in the business begun in 1963 by Larry Lexow’s brother George. Through the years it has developed specialties in insurance, retirement planning and financial advising. Larry Lexow expanded the business after buying out his brother’s interest in 1993. Christy joined up in 2005, after spending some time in Italy.
“The family’s been involved in the insurance game for more than 50 years. I think with the agency down here there was an opportunity for growth,” Larry Lexow said.
For information about the business, go to www.mmlins.com