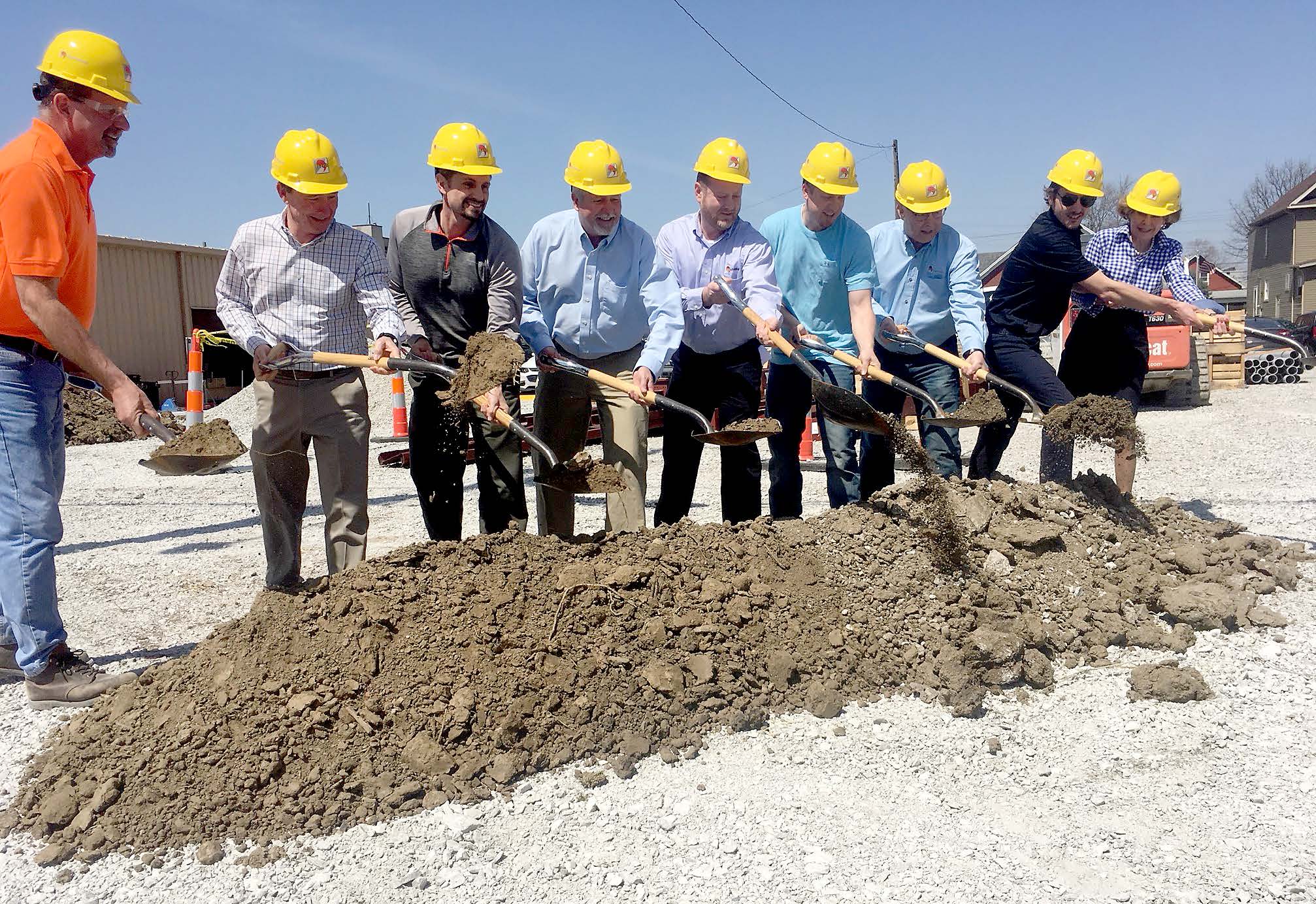 By DENNIS GRUBAUGH
GRANITE CITY — Construction has begun on a 14,400-square-foot building for icon Mechanical, a growing company that continues to bring new life into the city’s aging downtown core.
It will be the latest building in the company’s campus, which is spread over several blocks. This building is going up in the 1600 block of Edison Avenue.
icon is a mechanical engineering and construction firm specializing in the design, fabrication, installation, modification and service of process piping, industrial ventilation, and commercial HVAC. Its customers through the years have included the likes of General Motors, Oak Ridge National Laboratory and Toyota/Bodine.
The work it does has applications in laboratories, hospitals, power plants and more. This building will allow icon to produce heavy metal, prefabricated duct on a larger scale.
“It’s giving us the capacity to continue to grow,” Chief Financial Officer Jeff Smith told the Illinois Business Journal.
The company already has buildings devoted to sheet metal, pipe fabrication, warehousing and modular assembly space —some 125,000 square feet in total, in Granite City. There is also an office in St. Louis and a service and safety operations office in Madison, Ill.
The firm was opened in 1995 by founding partners Mike Bieg, Tim Schaeffer and Joe Parise, who died in 2006. Jeff Smith was added as a partner in 1998 and three others have since come aboard. The company is now owned by a group comprised of Bieg, Schaeffer, Jeff Smith, Jeff Rush, Todd Jeffries and Tom Murawski.
The company has 105 professional staff and another 150 employees in the field.
Scanning the terrain around him during a groundbreaking in April, Smith counted at least six houses that have been removed for expansion of various sorts at icon. Most of those properties were long past their prime.
“We’ve taken down several houses, and the neighbors have been really good seeing the improvements,” Smith said. “It’s good for the community.”
James Amos, economic development director for the city of Granite City, said icon Mechanical is a “part of most the major projects happening in the region right now.”
“To have their headquarters right here in downtown Granite City and investing in the community is a tremendous thing for us,” Amos said.
Amos said icon is a model for growth.
“They are growing in terms of business. They are growing in terms of the type of business they are going after. That’s what this is all about, this particular building,” he said.
Amos pointed out that icon, over the last several years, bought up a good portion of several blocks in and around 16th Street, not just houses but other properties, including industrial.
The company’s work is spread across the United States, but more international work is in the offing. Recently, icon worked a project in Mexico and is looking at the potential on the Caribbean island of St. Croix.
The prefabricated structure will begin arriving in May and should be completely assembled by August, the partners said.
They expect the investment will be in the range of $3 million.

“It’s going to help expand our existing base a lot,” Smith said. “We’ll be able to do more complete projects. Some of the heavy industrial we have to farm out. With this, we’ll be able to do it all inhouse.”
Among potential customers will be steel, automotive and aluminum plants — those that typically deal in high-temperature production environments, he said.
Steve Faust, icon’s business development/diversity coordinator, said understanding that the future of construction is understanding the need for off-site construction, prefabrication and modularization.
“Project schedules are constantly being compressed, and in order to meet accelerated schedules, we have to be able to build in advance through coordination and collaboration with all other subcontractors on site. This new building will give us even more capability to do just that,” Faust said.
The new facility will house additional upgrades that are unique to the rest of the headquarters’ shops. Two 10-ton overhead cranes will allow for easy movement of large-grade industrial materials and modules. The building will also be laid out to handle raw material up to 40 feet in length.
The space will also include an additional paint booth, allowing for higher quality control on the painting of prefabricated skids.
“This new facility will really diversify what we do in the sheet metal division of icon,” said Bob Belobraydic, icon’s Sheet Metal Fabrication Shop manager and member of Sheetmetal Local 268.
Civil engineering and land surveying is being provided by Juneau Associates, Inc., P.C., of Granite City. The facility is being erected under the direction of BBi Constructors, of St. Peters, Mo. Bieg Plumbing is providing plumbing and sanitation work, and Guarantee Electrical is providing all electrical services.