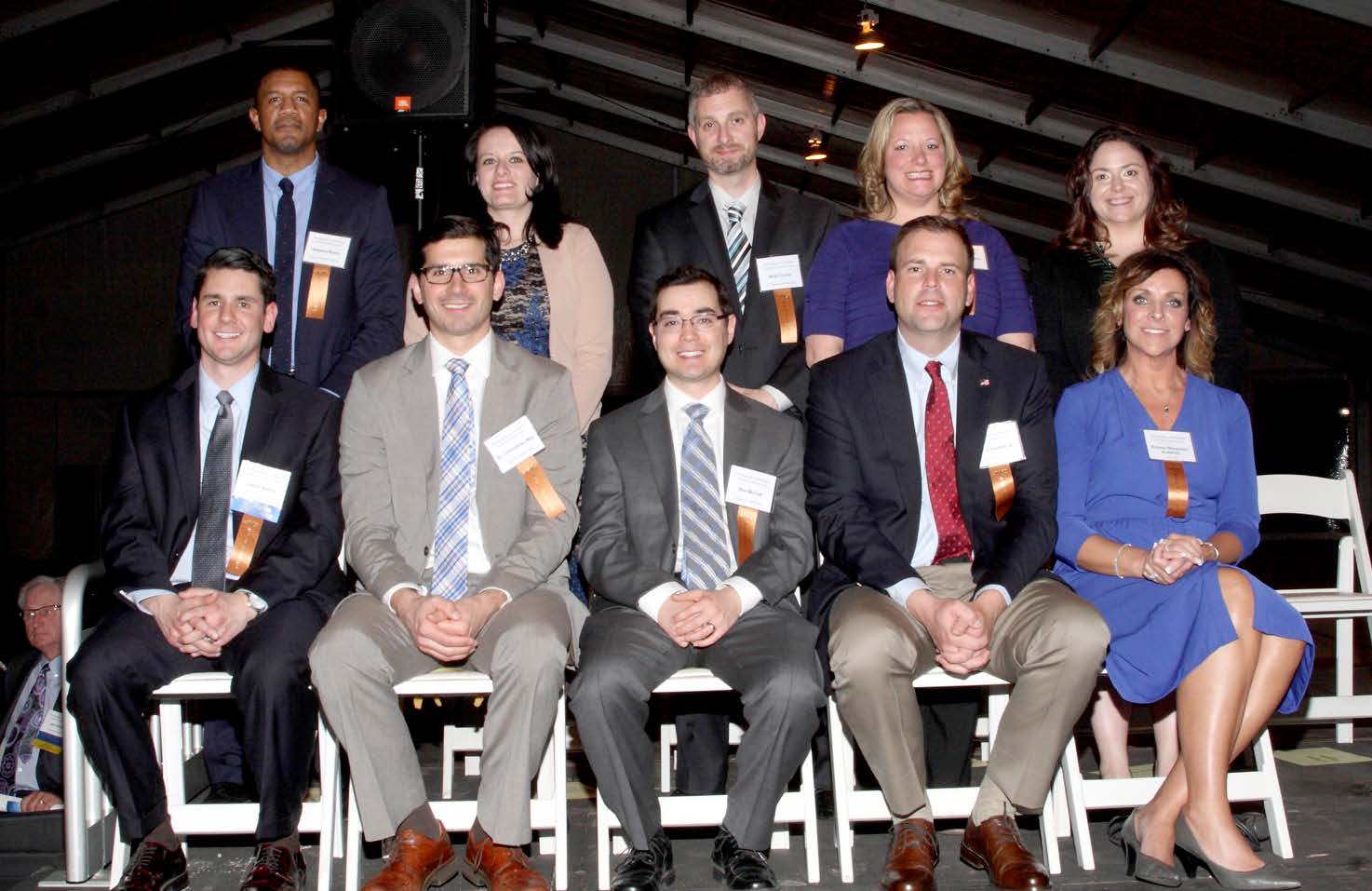 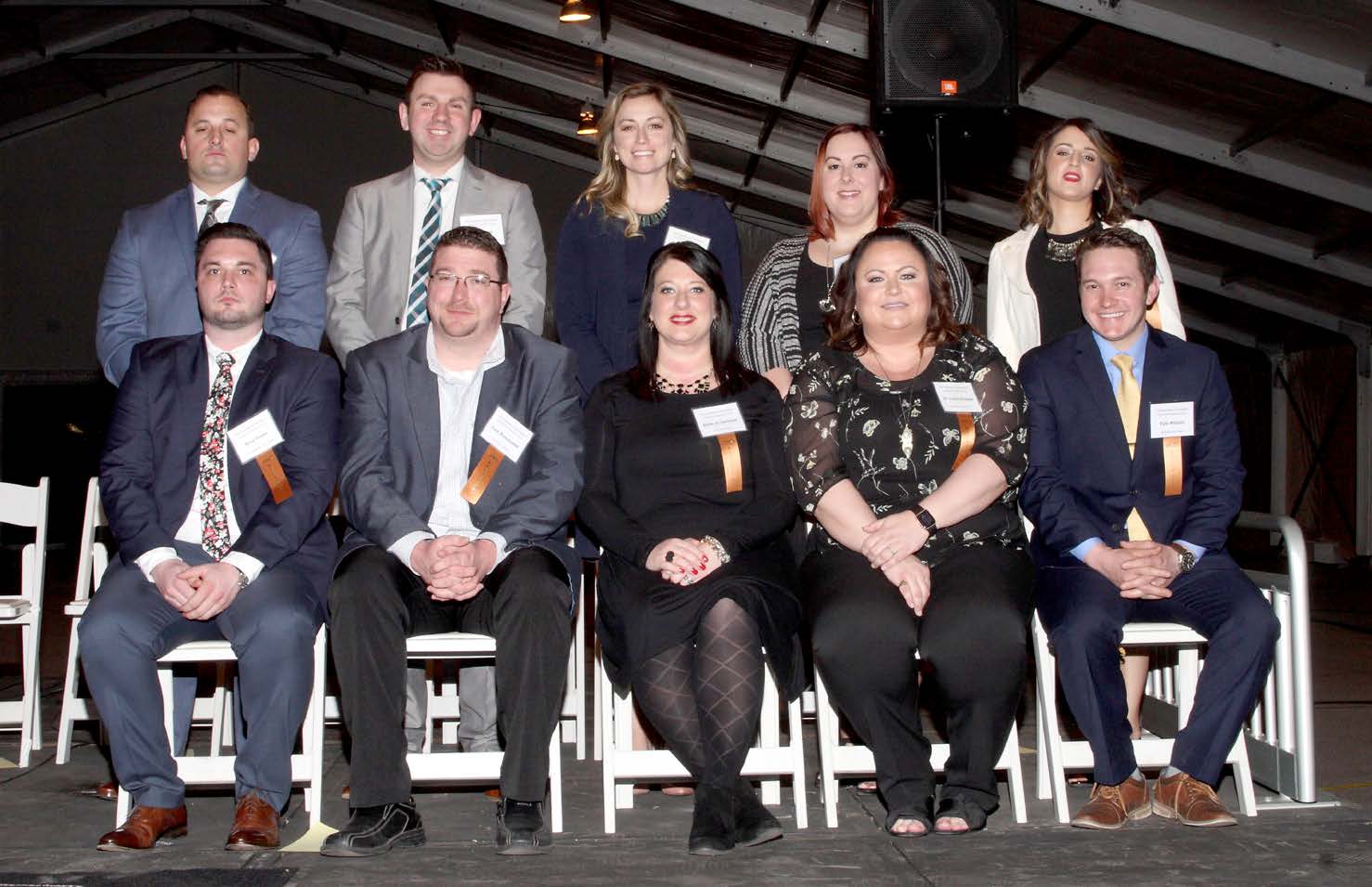 By DENNIS GRUBAUGH
One is CEO of his own company. Another started as a delivery driver and worked his way up. Still another is a rising star in the legal community and a civic leader at that.
They are among a group of 20 young men and women apparently destined for good things. And now, all of their futures may be inexorably linked — if their peers in the community get their wish.
The individuals were saluted as Leaders of Tomorrow this past month during the annual Business and Industrial Appreciation Evening of the Chamber of Commerce Southwestern Madison County. Hundreds of supporters gathered in their honor.
However, the event was not just for recognition purposes. Speakers told the group members that leadership reins are for the taking.
One of the emcees, Paul Wellhausen, said he didn’t have a contract, but if he did, a key point would be that the honorees stick together.
“The Chamber would like to have you meet on as a group. Don’t let this be the last time you guys get together,” he said. “We know you have potential, we know you have the skills, we want to tap that potential and those skills for the betterment of our communities.”
Existing leadership needs the help, he said.
“Because you are being recognized doesn’t mean leadership in our community will step aside for you or your thoughts or ideas, but tonight is the night that you can earn the right to have a seat at the table,” Wellhausen said.
He added: “You will have a blank canvas. We have provided you the paint brushes. It’s up to you what and how you paint the picture for future of our area.”
Jeff Kohler, president-elect of the board, said the Annual Business and Industry Appreciation Evening was established in 2001. In 2003, the Chamber began highlighting new businesses and new industry leaders in the program.
Then, in 2005, as the Chamber was celebrating its 65th anniversary, it recognized 65 young people that were nominated as “Leaders of Tomorrow” by the public.
“From that group 30 candidates were selected for the first Leadership Program in 2007,” Kohler said. Those who participated in that program as well as two following programs were among the audience at last month’s appreciation dinner. So, too, were many of the companies who fostered the individuals’ growth.
“Many of our up and coming young business people are running their own offices, being promoted within our larger companies and hopefully will be making their place as leaders of this community,” said Rosemarie Brown, executive director of the Chamber of Commerce. “If we are to hope for a community that will grow and develop into a vibrant and healthy place to work and live, we need to be recognizing these future leaders and we need to be providing them a diverse network of friends and colleagues.”
Sponsors of the annual event included: Commerce Bank, Custom Steel Processing, Gateway Regional Medical Center, icon Mechanical Construction, Prairie Farm Dairy, SCF Lewis & Clark Marine, and Weber Granite City Chevrolet & Ford. Brown also cited the help of Curtis Francois and his staff at Gateway Motorsports park and to Chamber “friend” Margaret Pennell.
Here is a recap of the honorees:

Stephen Brock, president and CEO of Supplied Industrial Solutions, a company he founded in 2003, after his four-year tour of duty in the Marine Corp. SIS got its start in the distribution of industrial and construction materials and supplies.

Rachel Clothier, owner and primary designer at Goff & Dittman Florists, which was established in 1948. She is also vice president of Elite Event Services, a company founded by her and her husband, Kyle, in 2011.

Brad Corrie, senior project manager at icon Mechanical Construction and Engineering. He deals in management of projects from conception through completion.

Dr. Christy Darin, owner of Darin Chiropractic and a 2008 graduate of Logan College of Chiropractic. Since starting her practice in Granite City five years ago, she has been a supporter of many civic causes.

Stephen Hagopian, an account executive with Aramark Uniform Service since 2016. He is an Edwardsville High School graduate and completed his bachelor’s degree with a double major in Sports Management/Communications and Political Science from Westminster College in Fulton, Mo., and has a master’s degree in Sports Management from Lindenwood University.

Adam Heil, who has been with Coyle Supply since 2010, starting as a delivery driver and warehouseman and working his way up while earning his degree from Southern Illinois University in communications and business. He currently manages the company’s public profile as an industry leader in pipe, valves and fittings.

Katie Hubbard, an attorney at Goldenberg Heller & Antognoli, P.C., with offices in Madison County and St. Louis. She specializes in litigation that helps people who have been harmed. She has held many roles with local bar and legal associations.

Katie Johnson, of StS Armory in Pontoon Beach, graduated from Granite City High School in 2004 and completed her undergraduate and Master of Business Administration degree at Lindenwood University in Belleville. With her husband, Jesse, they started Soteria Training Solutions in 2013. Their company has trained more than 1,400 students for Illinois Concealed Carry. She is working on opening an indoor shooting range in the area.

Samantha Khani, of Dynamic Transit, grew up in St. Louis and has been around the trucking industry her entire life. After graduating from MICDS in St. Louis, in 2010, she pursued a Bachelor Science degree in Physics at the University of Denver. Later, she rejoined Dynamic Transit as its newest recruiter.

Jason Kohut, of U.S. Bank, has six years of experience in the commercial banking industry. He has a Bachelor of Arts in Management and Organizational Behavior and a Master of Business Administration in Finance, from the University of Missouri-St. Louis. He is involved in several civic endeavors.

Dr. Christopher May, who owns Metro East Dental Care in Granite City, grew up in Mount Prospect, Ill. He attended Marquette University for his undergraduate degree and SIUE for his Doctorate of Dental Medicine. In 2017, he and his wife moved closer to her family and purchased the operation of Drs. Kent and Kathy Splaingard.

Ben McCall, of America’s Central Port, who plans improvements to the port’s 1,200-acre property and oversees real estate development projects on behalf of new port tenants. He joined the port after receiving his Master’s Degree in Planning and Real Estate Development from Saint Louis University in 2012.

Patrick Notestine Jr., chief operating officer of Custom Steel Processing. He is a lifelong resident of the St. Louis area. He is a graduate of UMSL, with a degree in finance. At the age of 16 he began his experience in the steel business at a high school summer job. He has progressed through the plant working in customer service, sales, and plant management.

Kristen Novacich-Koberna, director of Elementary Education/Title I at the Granite City Community Unit School District 9. Previously she served as assistant principal and principal at Grigsby Middle School. She was alderwoman to the Granite City Council from 2003 to 2006. She has bachelor’s and master’s degrees and will graduate in May 5 with a Specialist Certification from Lindenwood University.

Brice Power, general manager of the Terminal Division of SCF Lewis & Clark, is a native of St. Louis and was raised in Webster Groves. He attended Desmet Jesuit High School and graduated from Fontbonne University with a focus in supply chain management and logistics. He went to work at SCF Lewis & Clark after graduation.

Cory Respondek is the vice president of marketing and new operations with Port Harbor Railroad. He has served in that position since 2016. He was raised in Salem, Ill. He graduated from Lee University and was ordained as a bishop in the Church of God in Cleveland, Tennessee in 2016.

Billie Jo Sanchez is a lifelong resident of Granite City who graduated from UMSL with a Bachelor’s Degree in Business Communication. She has worked at GCS Credit Union for 10 years. Her current title is project manager. She is tasked with implementing new systems and products and also oversees the training and development of staff.

Dr. Laura Shipley, of Shipley Chiropractic, is a third-generation chiropractor, continuing a tradition of her family in Granite City for more than 55 years. Combining traditional methods with the latest technology, she customizes care to meet individual patient needs and provide relief where other treatment protocols have failed.

Kyle Watson graduated from Granite City High School in 2007. He joined Illinois Electric Works in 2010 as a machinist helper and worked his way through the ranks. Today, he is counted on to repair all manner of industrial equipment. He is working on his Associate Degree in Precision Machining from Southwestern Illinois College.