Polynesian Breeze owner Michele Goldsmith has been working with the Illinois Small Business Development Center for the Metro East at Southern Illinois University Edwardsville since last summer to prepare and perfect her business.

Goldsmith will soon open Polynesian Breeze in Collinsville and introduce Polynesian culture to the area with treats such as shave ice. Shave ice (shave not shaved) is an ice-based dessert made by shaving a block of ice. While the product can resemble a snow cone, snow cones are made with crushed, rather than shaved, ice. 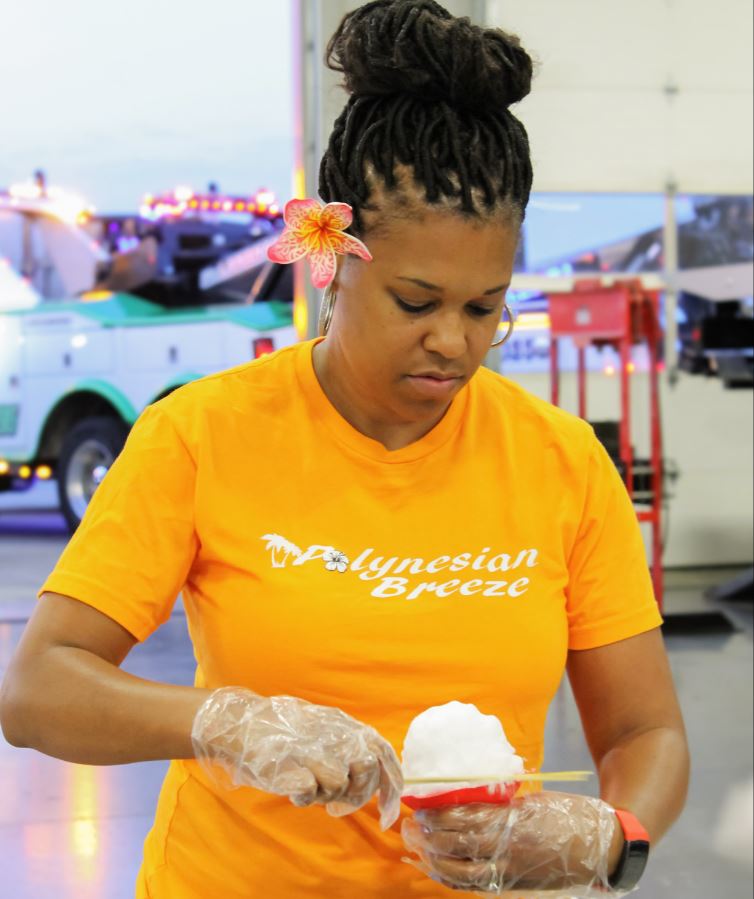 The Polynesian Breeze idea first came from an experience Goldsmith had when getting ice cream from an ice cream truck. Her husband, William, regularly reminisces about home and misses his culture, so Goldsmith decided to bring the culture to him. Shave ice is a triple-layer dessert with the texture of snow that is mostly found in Hawaii and is of Polynesian origin.

Goldsmith says SBDC Director Jo Ann DiMaggio May was helpful with referrals for realty agents and possible lenders. Goldsmith is also quite happy to be in contact with Community Development Director David Bookless of the City of Collinsville.

DiMaggio May comforted Goldsmith that she would be there for any kind of assistance and gave her a sense of direction with the process.

“It was nice to have her there for help, and she was always available to answer my questions any time of day,” said Goldsmith.

Goldsmith knows she can give a one-of-a-kind experience since the Midwest is not familiar with shave ice and Polynesian culture. She wants people who have visited the Islands to eat it with that nostalgic feeling of a relaxing vacation. She also wants the Metro East to experience the authenticity, flavors and flare that only Polynesian Breeze can bring to the area.

Shave ice starts with an ice cream base, which is optional, topped with thinly shaved ice off a block, and then drizzled with authentic Hawaiian flavors, to which you can add the last layer of optional toppings. The most popular topping added is called a snow cap, which is sweetened condensed milk. Additional topping choices are fresh fruits, Azuki bean and Mochi balls.

Other products will be offered such as Kona coffee, which will come in regular, vanilla macadamia nut and chocolate macadamia nut flavors. Goldsmith will also feature cookies that are only sold in the Islands called
Honolulu cookies along with many other snack options.

The company will have people of Polynesian culture performing occasionally, including Nyssa Collins, a former contestant on the television show X-Factor in New Zealand and Australia.

Looking to the future, Goldsmith sees Polynesian Breeze becoming a franchise as she spreads awareness and the experience of Polynesian culture. Polynesian Breeze’s Collinsville location will share a parking lot with Swing City Music on the corner of 159 and the Beltline.

The Illinois SBDC for the Metro East assists start-up ventures like Polynesian Breeze as well as existing businesses headquartered in the nine-county region of Calhoun, Jersey, Madison, Bond, Clinton, St. Clair, Washington, Monroe and Randolph. It is funded in part through a cooperative agreement with the U.S. Small Business Administration, Illinois Department of Commerce and Economic Opportunity, and SIUE as a service to Illinois small businesses.