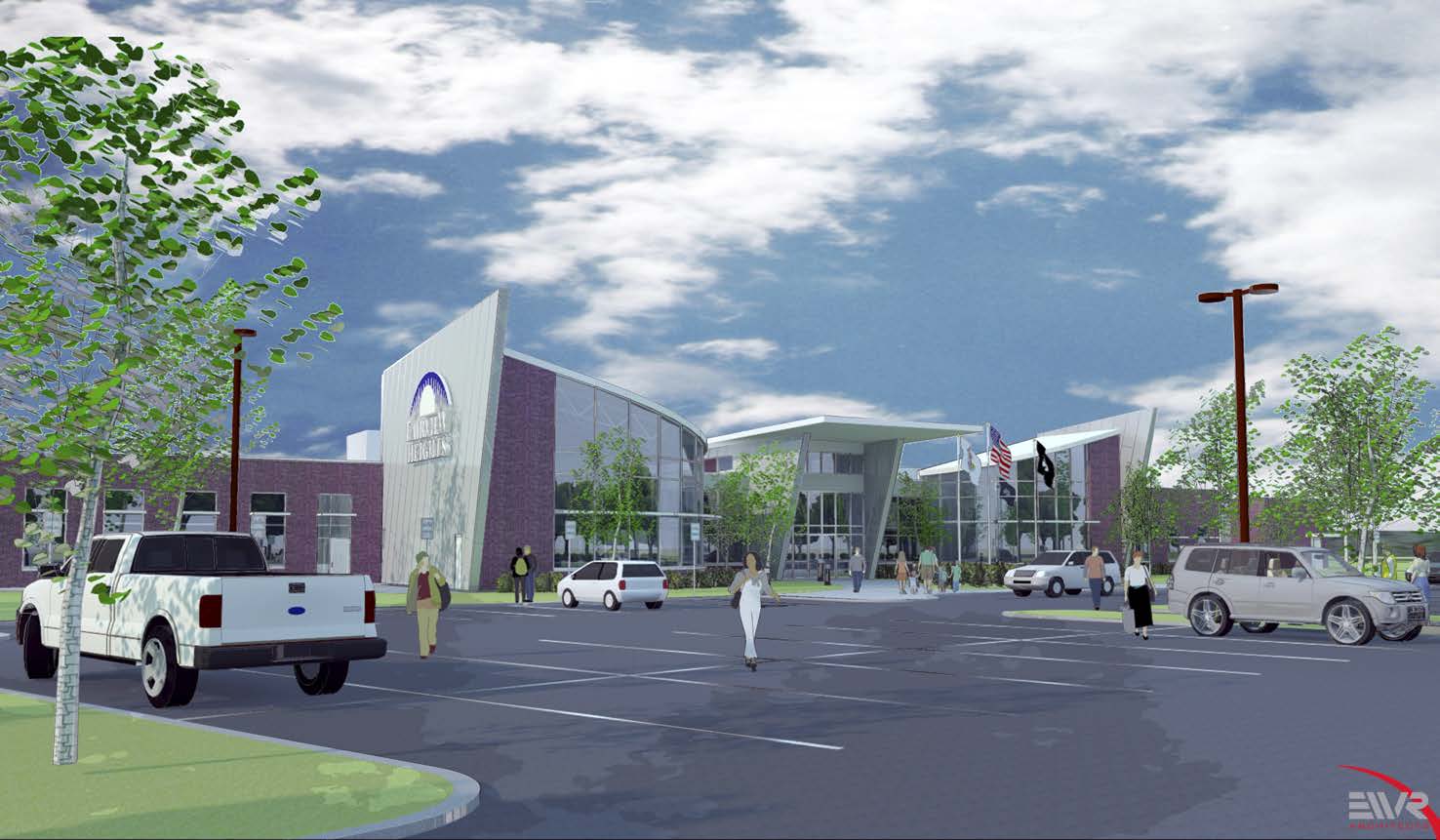 By RITA DUCKWORTH
Swansea-based Holland Construction Services is managing construction of the Fairview Heights Recreational Complex. The firm broke ground in October 2017 for the $17 million facility that will benefit city residents of all ages.
“The 58,000-square-foot, two-story building is a ‘walkout’ style,” says D.J. Weymouth, Holland’s project manager. “You’ll enter on the main floor. Downstairs, a lower level will open to the outside. The design follows the natural slope of the land, so significant changes to the terrain weren’t necessary.”
The city’s Parks and Recreation Department will relocate to the new building. In addition to the offices, party and meeting rooms will be available for community use.
The structure will house a full aquatic center with a pool, children’s splash area, large slide and lazy river. A full fitness center will include weights and exercise machines, plus group fitness rooms. A running track will look down onto two basketball courts that can be reconfigured for volleyball or pickleball. The most unusual feature is a unique climbing wall system called a Clip ‘n Climb.
Outside, the 31-acre site will feature a running track, soccer fields and walking trail. Holland will replant the area with plants that offer a habitat for bees and butterflies.
EWR Architects provided the original design, calling for a mixture of structural steel, structural masonry and glass. “Some of the design features require careful sequencing and planning early in the project,” says Weymouth. “The building has exposed steel joists and decking. Curved walls of glass, masonry and metal panels will be in three areas. Large metal wing walls will stick out on the front and back of the building. With design aspects that are also holding up the building, you only have one chance to get it right.”
Completion of the complex is expected in the spring of 2019.

Long before construction began in February on what will become the South Grand Apartments in South St. Louis, Altus Properties sought preconstruction expertise from Swansea-based Holland Construction Services.
But the professional relationship building began well before that, said Josh Udelhofen, managing director of development for Altus.
“Doug (Weber, director of multifamily housing and project executive at Holland) and I met each other during my tenure at the Koman Group back in 2015 when Koman was partnering with Green Street St. Louis to develop CHROMA, the mixed-use development formerly known as Chouteau’s Grove,” said Udelhofen. “That’s how we were first introduced to each other. From that time forward, Doug and I grew our professional relationship. Several years later, when Altus was looking for proven preconstruction expertise for the South Grand project, we looked no further than Holland.”
Holland assisted Altus in navigating the preconstruction process for the South Grand Apartments – a 124-unit, market rate living community in the 2200 block of South Grand Boulevard on the former site of the South City Family YMCA. The development is scheduled for completion in May 2019, according to Weber. Units will range from studios to those with one and two bedrooms.
“We (Holland) began working with Altus on this development in September 2016,” Weber said. “Over the last seven years, Holland has completed or currently has under construction 12 market rate (multifamily) projects in the St. Louis area. We have a good handle on current trends and pricing of the different components inherent in these multifamily living developments. Taking this knowledge to clients like Altus to enable them to make the best decisions possible during design is key to the preconstruction service that we provide. Holland has a tremendous amount of respect for Altus,” he added. “Our target client is one who values the expertise we bring to the table, and one who sees us as a service-oriented company.
Udelhofen said Altus owns more than 60 buildings in St. Louis, Minneapolis and Kansas City, Mo. High-profile Altus buildings in St. Louis include Magna Place at Hanley Road and Interstate 40 in Brentwood, Creve Coeur Pavilion on Olive Boulevard and Interstate 270 and the Bemiston Tower in Clayton.
During the preconstruction phase of commercial construction projects, Holland works closely with designers on cost-effective solutions. Developing a doable project timeline and specifying optimal assembly methods are also part of Holland’s preconstruction expertise, Weber said.