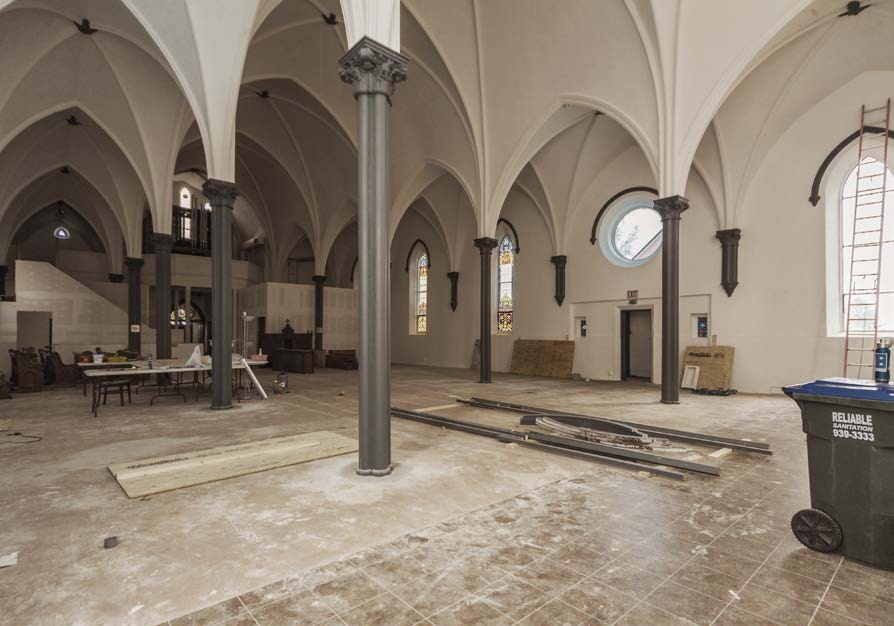 By ALAN J. ORTBALS
The city of Columbia is utilizing tax increment financing and a special business district to assist the redevelopment of the Immaculate Conception Church and school into the Main Street Abbey. The church dates back to the 1860s.
The project is the brainchild of local contractor Gregg Crawford of Mid-America Contracting. Crawford is patterning the development after the successful Kennedy School project in Portland, Ore. There, developers have converted the former elementary school space into event space, bed and breakfast and microbrewery. He got the idea for the Main Street Abbey when the parish announced it would be relocating to a new site on the edge of town.
The property, which covers an entire city block, is being redeveloped in two phases. The first phase is the renovation of the church to provide a venue for weddings and other events. Immaculate Conception Church has already relocated to a new building and the renovation of the old one is well underway. Dustin Row, the Abbey’s venue and events manager, says that he’s already booking weddings and approximately 75 percent of them are coming from Missouri. The convent has been turned into a café and beauty salon, which have already opened. Conversion of the rectory into five lofts is also being done in this phase.
Phase II will entail the school. Immaculate Conception Elementary School is expecting to vacate the old building for a new school adjacent to the new church at the end of the year. The school will be converted to a bed and breakfast and microbrewery. The whole project will cost $5.7 million. The city will reimburse the developer $1.5 million via TIF and business district revenues.

Emily Fultz, the city’s director of community development, said that the two districts only include the church property but she expects the Abbey project will have a positive impact up and down Main Street. The city is utilizing other funds to carry out a streetscape program along Main Street with the Abbey property near its center. Fultz said that without the city’s assistance through the TIF and business district programs, redevelopment of the property would have simply been unfeasible and the city would have been left with a vacant block in the middle of its downtown.
“We’re thankful we have these tools to work with,” Fultz said.