By DENNIS GRUBAUGH
Zach Markwell’s commitment to a half-billion-dollar transmodal logistics business park in Jerseyville shows in the passion with which he talks about it.
He’s in this project, as railroaders might say, for the long haul.
“We would never have a ceremony to announce something, then ultimately decide it isn’t for us. What we bring to our projects across the globe is certainty of execution,” he said.

William “Zach” Markwell III’s Stonemont Financial Group is privately funding what has the potential to become one of the Midwest’s largest construction projects – a 1,400-acre rail and trucking center to be located just south of Jerseyville.
It is Stonemont’s second project with Kansas City Southern, the first being the 540-acre El Campo, Texas, multimodal development underway near Houston. At capacity, the El Campo site is expected to accommodate up to 8 million square feet of Class A warehouse, manufacturing, and rail-serviced distribution facilities, according to marketing information.
The Jerseyville location would further serve the partners’ mission to move goods from Mexico to the north. Once in Jersey County, the products can then be shipped by railroad and trucks to millions of people within a day’s drive. Or, those products can be offloaded for assembly in warehouses, then distributed.

“Getting to the top of that KCS rail network is extremely important because you can stay on one carrier all the way up. As we do these things around the country what’s so important is finding a city, county and region that is welcoming to a project like this,” he said.
Markwell knows rural America: He grew up in a small town in Kentucky.
“There’s not a lot of opportunities for the next generation who are growing up and having to leave to go other places for sustainable jobs,” he said. “These are not fly-by-night jobs. We’re building a new way to distribute to the entire Midwest.”
The jobs will depend on who the ultimate users of the business park will be. There will be “tremendous construction, but that’s not what I want folks in the region focusing on. It’s more than construction jobs. It’s distribution, light manufacturing, assembly. All up and down the Kansas City Southern line.”
Most of the interest so far has been from business sectors involving auto manufacturers, consumer goods, building products and agriculture.
“We are in advanced conversations with multiple users, designing to their needs right now,” he said. Nothing is ready to be announced just yet, but should be by the end of the year.
The remainder of 2018 will be spent on due diligence and design phases, working in conjunction with KCS and many others. Still to be done is the analysis of how the park will exist with surrounding roadways, connections from the rail line, and the internal infrastructure.
Markwell said his company can only control what happens on his site, but he’s working closely with IDOT and others to make sure outside road improvements are addressed.
He believes there will be adequate workforce for the needs.
“We’ve done our homework on the existing workforce and our users have as well. We believe that is another strategic piece of this location. On other projects like this, you really pull workforce back to the area that otherwise did not have the opportunities.”
Asked if a feasibility study’s prediction that 1,000 or more workers is plausible, he said, “All we can go by is our past experience on projects like this. The numbers we see are really exciting. “
The El Campo site has seen significant job growth, he said.
The project here is called the Mid-American International Gateway Business Park.
“This is truly an international project,” he said, noting the various secondary logistics businesses, America’s Central Port, area warehousing and others who are all excited by the possibilities.
“That factors into the overall project and why we ultimately got involved. As much as this is about the great people in Jerseyville who worked tirelessly on this project before we got involved, it’s just as much about the entire region and the other components of logistics that are already there and functioning.”
He stressed Stonemont would be “locking arms, and not be competitors” with the other logistics operators.
The business park will be designed to serve many different users, not a specific industry, though the approach will remain flexible depending who the ultimate users are.
Enough land is in hand to get the project started.
“We’ve got the strategic part under option. There’s a couple of ways of looking at this in terms of ‘breaking ground,’ but from our perspective we’ve already kicked this thing off,” Markwell said. “We’ve been funding this for over a year and we have an already significant investment in the project. As far as putting a shovel in the dirt, we can do that at any point.”
Jerseyville Mayor William “Billy” Russell said Markwell has expressed to the mayor a willingness to invest $500 million to $1 billion. In an interview with the IBJ, Markwell was more circumspect.
“We haven’t put specific numbers on it but in projects we’ve done around the country, the numbers have exceeded that,” he said.
Markwell founded Stonemont in 2007. It is a privately held investment management firm based in Atlanta. A part of its investment platform is real estate management.
“We currently have $2.3 billion under management,” he said. “That’s everything from individual property to fund management to full-on logistics parks like we’re talking here.”
The company has invested more than $17 billion during its existence on many projects. Stonemont recently completed one of its larger office projects, the North American headquarters for Zurich insurance in Schaumberg, Ill.
Markwell started his business during the recession years. 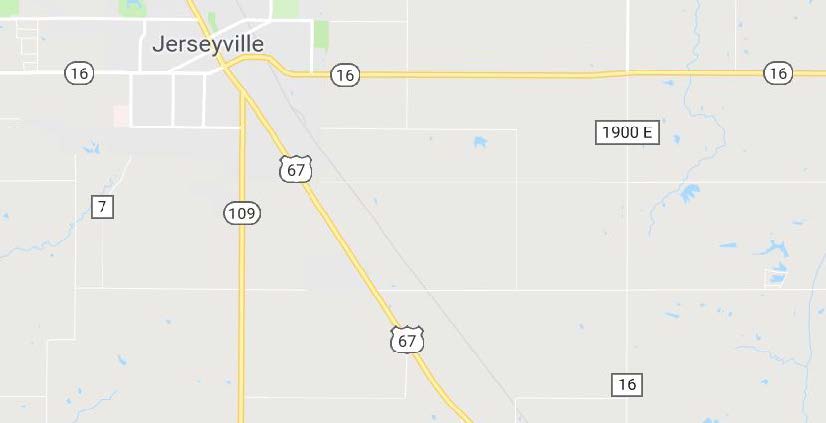 “It’s always an interesting time to start a new business during an economic downturn, but it was a great launching point because we had capital and a clean balance sheet. We were able to get out and serve a lot of developers and users who needed product during the downturn,” he said.
Markwell said the names of the Mid-American International Gateway Business Park as well as the Southwest International Gateway Business Park in El Campo reflect exactly what they are about.
“What we’re telling the world from here is this is how, on a single carrier, you get to the entire Midwest population,” he said. “If you would ask someone else how to do this, prior to this project, you’d do it through Chicago. But here’s a way to avoid the congestion of Chicago.”
Certainty is a big part of this project, he said.
“We are very aligned with KCS on this. When we go in to a community and say we are going to do something, the capital is there to do it,” Markwell said.
So, why Jerseyville?
“That’s a great question,” Markwell said. “As much as I’d love to say ‘perfect location,’ ‘top of the network’ and all of the advantages that absolutely do exist, along with the partners in the region, equal to that are the people of Jerseyville and in surrounding communities that are welcoming this project.”
He added: “Could it have been 20 miles up or down the line? Absolutely, but the people of Jerseyville and surrounding communities are really what made that happen.”
Markwell said he has adopted Jerseyville as a second home and plans to acquire a residence there.

1,000-plus jobs in offing with new development

From high school to CEO, teen businessman charts own path

POINT: How should we fix the Illinois pension system?