Each year, the Illinois Department of Aging recognizes a few select seniors for dedication and service. Hawkins was nominated by state Sen. Bill Haine, D-Alton. 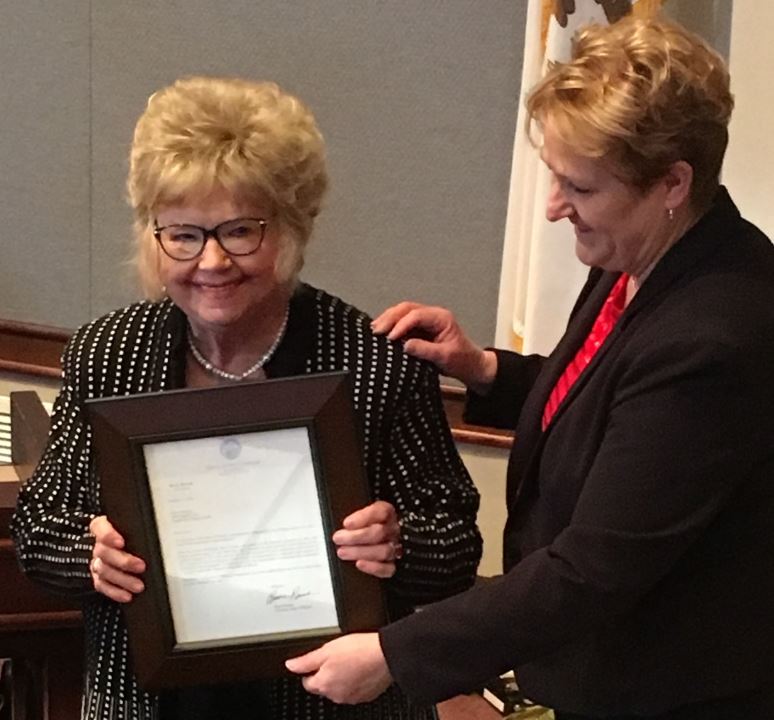 The director of the Illinois Department of Aging, Jean Bohnhoff, presented an award to Hawkins, along with a letter of recognition from Gov. Bruce Rauner during a ceremony at the County Administration building.

“I can’t begin to tell you how much it warms my heart to be here,” Bohnhoff said. “As we look across the state for individuals that really stand out in our communities we get that information from people like you.”

Bohnhoff said in 1994, the Illinois General Assembly made the decision that the state needed to honor older adults in Illinois. She said one of the requirements is you must 65 years or older.

“With all the incredible individuals we have to honor, Helen is our 2017 Hall of Fame inductee for the category of Community Service,” she said.

Superintendent of Granite City School District Jim Greenwald spoke about Hawkins. He said as he was listening to an ESPN radio show Wednesday morning and the announcer mentioned the recent inductees to the NFL Hall of Fame he realized “Hall of Fame” means “elite excellence.”

“You certainly stand for that with everything that you do, Helen,” he said.

He said Hawkins contacted him three years ago and said she needed his assistance with a Valentines for Vets program. He said thousands of Valentines from students were created for service men and women and a ceremony was held at Mitchell Elementary School

“One year later, she contacted me and said, ‘Let’s do it again,’ but this time at Maryville Elementary School,” Greenwald said.

With the help of Hawkins’ friend and Granite City School Board member Linda Knogel, the program put even more finishing touches on it this year.

Last week at Frohardt Elementary School, more than 6,000 valentines were delivered to a representative with U.S. Rep. Mike Bost’s office to deliver to the military.

Children from the school, along with Madison County Board member Kristin Novachich-Koberna, who is also the school district’s director of elementary education, attended Hawkins event.

“We have valentines from our 3-year-old in our pre-school program, all the way to our 19-year-old seniors and Helen this wouldn’t have been possible without your leadership over the years,” Greenwald said.

“She is respected and admired by everyone,” Prenzler said.

Hawkins said she was appreciative for receiving such an honor. She said as you get older you shouldn’t slow down, but speed up because there is less time.

“I never dreamed this would happen to me,” Hawkins said. “This is a wonderful. You need to look out for other people you see along the way.

“It makes you feel so wonderful to help people who need your help.”

PHOTO: Director of the Illinois Department of Aging Jean Bohnhoff presents Madison Count Board member Helen Hawkins, Granite City, on Wednesday with a letter of recognition by Gov. Bruce Rauner for her induction into the Illinois Senior Hall of Fame.