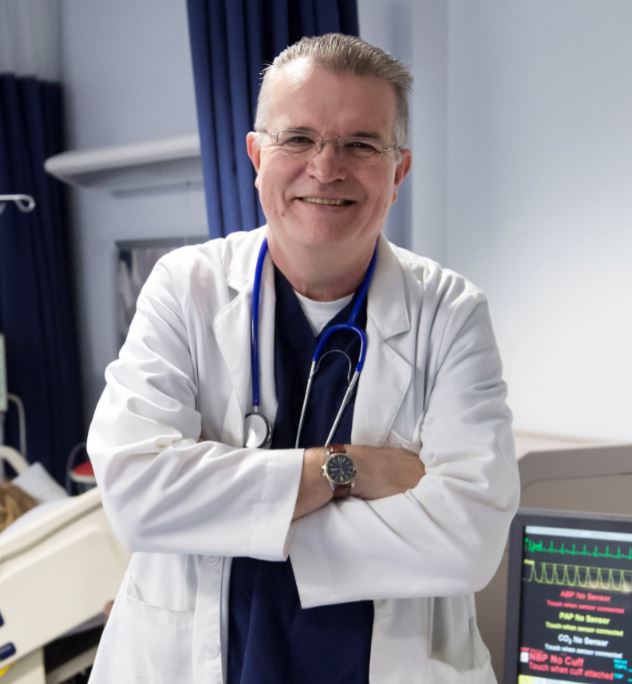 The award recognizes the highest levels of faculty achievement in the Illinois community college system, and nominees are selected by a committee of their peers.

Wellhausen, a professor of nursing, teaches Pharmacology for Nursing and is the Simulation Lab instructor for all Lewis and Clark Nursing students.

A former nurse computer analyst, his skillset was invaluable when the college’s program moved into the Templin Nursing Building and began incorporating instructional simulators for the first time.

A Carlinville High School grad, Wellhausen earned his Bachelor of Nursing degree from Southern Illinois University Edwardsville in 1982, and his Master of Science in Nursing degree, with specialization in Medical-Surgical Nursing, in 1993, also from SIUE.

He joined the college as an adjunct nursing clinical instructor at Saint Anthony’s Hospital in Alton from 2003-2005, before being hired full time as a nursing instructor in 2005.

Wellhausen’s greatest strength is his commitment to student learning. He enjoys teaching and sharing knowledge with others in the Simulation Lab, especially.

“In the nursing program, I utilize a learner-centered teaching and learning approach,” he said. “This approach allows students to think critically and analyze situations, and work collaboratively and communicate in groups. Working with students in the Simulation Lab allows me the unique opportunity to assess if the students really have the knowledge or are able to perform skills.”

Prior to LCCC, Wellhausen had considerable experience working for the American Heart Association, Illinois Region as a cardiopulmonary resuscitation (CPR) instructor, in addition to years of experience as a staff nurse in emergency rooms/trauma centers, ICUs and medical/pediatrics at several area hospitals.

From 1993-2004, Wellhausen worked as a nurse computer analyst and was responsible for planning, designing and implementing a computer orientation program. He conducted professional development on the use of computers in patient care documentation, and he built computer screens to increase the usefulness of the computer technology.

Wellhausen received a Volunteer Service Award from the American Heart Association in 1994 and the Church of Jesus Christ of Latter Day Saints On My Honor Adult Recognition Award in 2016, in addition to two adult service knot awards from the Boy Scouts of America in 2015 and 2016.

His proudest moment, though, is helping students succeed and be able to start their careers in nursing.

“I feel the most challenging part of being a teacher is when a student does not succeed,” Wellhausen said. “I would advise perspective students to be willing to commit themselves to their nursing courses for the next two years in order to be successful.”

Since 1993, the college has nominated a full-time faculty member for this award, to go on and compete with other nominees for the statewide Outstanding Faculty Member Award. As a nominee, Wellhausen is invited to attend the ICCTA Awards Banquet in June, where the statewide winner will be announced.