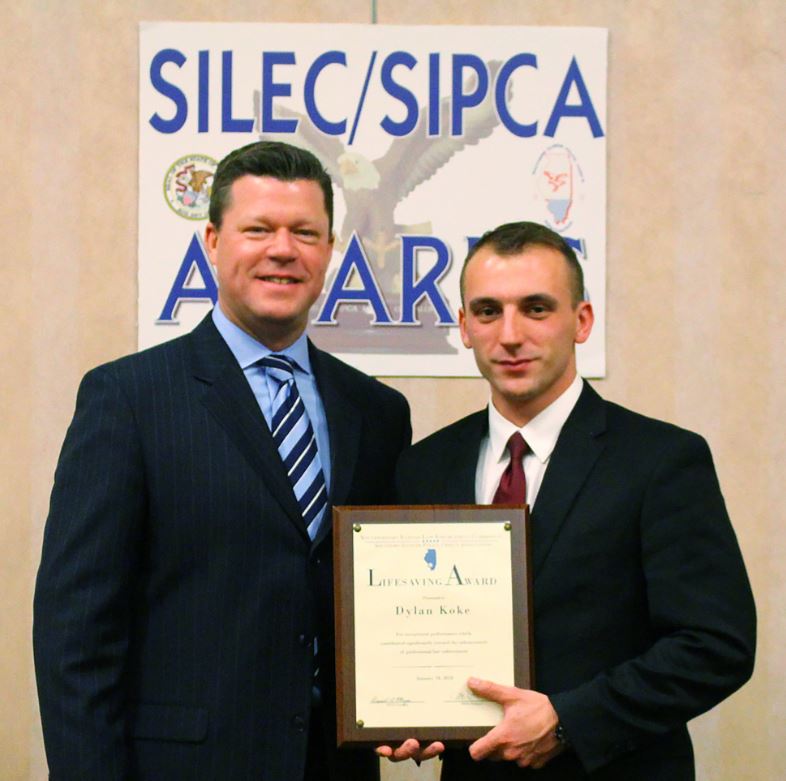 Koke was honored at the 26th Annual SILEC/SIPCA Awards Banquet, along with SIUE Police Telecommunicator Kathleen Pont. Pont earned the “Blue Light Award,” which recognizes full-time employees who serve as the backbone of their agency.

“We are proud to have Officer Koke in our department,” said SIUE Police Chief Kevin Schmoll. “His quick thinking and calm reaction in a stressful situation reflected his excellent training and willingness to get involved to help someone else.”

In September 2017, Koke was eating lunch with 39 other SWIC Police Academy recruits when he observed a SWIC student choking and responded by performing the Heimlich maneuver. He was able to dislodge the blocked object and save the student’s life.

As a recipient of the “Blue Light” award, Pont has served as a positive role model among her colleagues and continuously displays loyalty and dependability. According to Schmoll, she has been integral in the department’s ability to successfully navigate and properly utilize its New World system to its full potential.

“Kathleen’s constant focus on department needs over her own has shown just how valuable she is to our team’s success,” Schmoll said. “She is a go-to person in our department, continuously taking charge in various situations, resulting in positive outcomes.

Along with her dedication to the SIUE Police Department, Schmoll noted Pont’s volunteerism with Special Olympics and The Leukemia and Lymphoma Society.

“Kathleen’s hard work inspires our department and sets the standard for all to achieve,” he added.