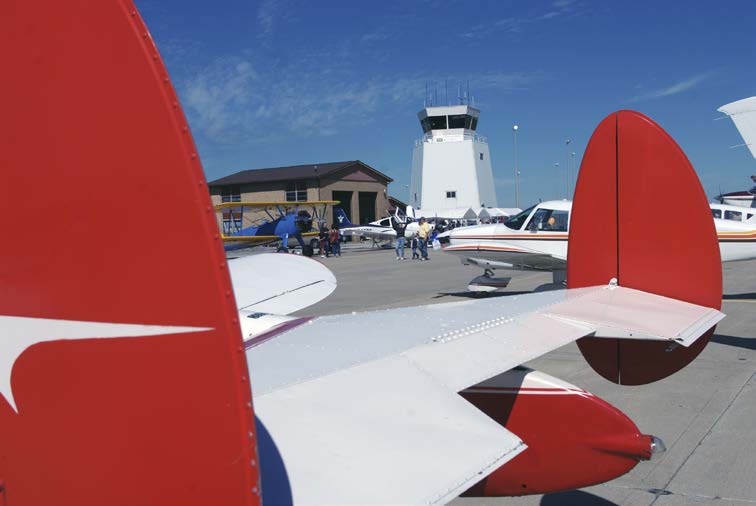 Community activities were a highlight for St. Louis Regional Airport in 2017 as the airport continued its focus on safety and emergency preparedness as well as supporting a variety of service groups in the region.
“Thousands turn out each year for the Wings and Wheels Fly-In and Car Show on the last Saturday of every September, but I don’t think people realize how many community support activities St. Louis Regional actually hosts in a given year,” said David C. Miller, director of aviation for the airport.
An intergovernmental agreement with the Illinois Emergency Management Agency signed in 2016 allows the airport to serve as an emergency staging area in a disaster. Readiness exercises have included amateur radio service field days and disaster preparedness training with Phillips 66 Wood River Refinery and Madison County Emergency Management.
In 2017 the airport was able to help showcase safe driving for two important groups. Republic Services held its annual “Family Fun Day and Truck ROAD-EO” at the airport for the second year in a row. The drivers learned how to operate safely around aircraft and qualified to compete in the national driving competition held in Phoenix, Ariz.
The airport also provided space for local law enforcement tactical driver training and law enforcement orientation.
Other events included a Make-a-Wish fundraiser in the spring, a Mustangs for Mustangs car club fundraiser on Memorial Day, the Cornerstone Church Fireworks the last weekend of June and A Horse Affair on Veterans Day.
The fireworks alone are estimated to have brought 7,000 people to the airport and maybe as many as 30,000 viewers out to watch in the surrounding community.
“St. Louis Regional Airport is committed to supporting the community,” said Miller. “The commissioners put a lot of effort into safety, emergency preparedness and keeping the facilities in top-notch condition for pilots and our neighbors.”
The airport restaurant, High Flyers Grille, has continued to entertain visitors on its expanded patio along the main taxiway and other business has stayed strong in St. Louis Regional’s 600-acre business park as well. West Star Aviation was once again voted the number one Maintenance, Repair and Overhaul (MRO) facility in the nation, leading the Pro-pilot Magazine survey for the fourth year in a row.

Belleville City Hall work was a highlight in 2017