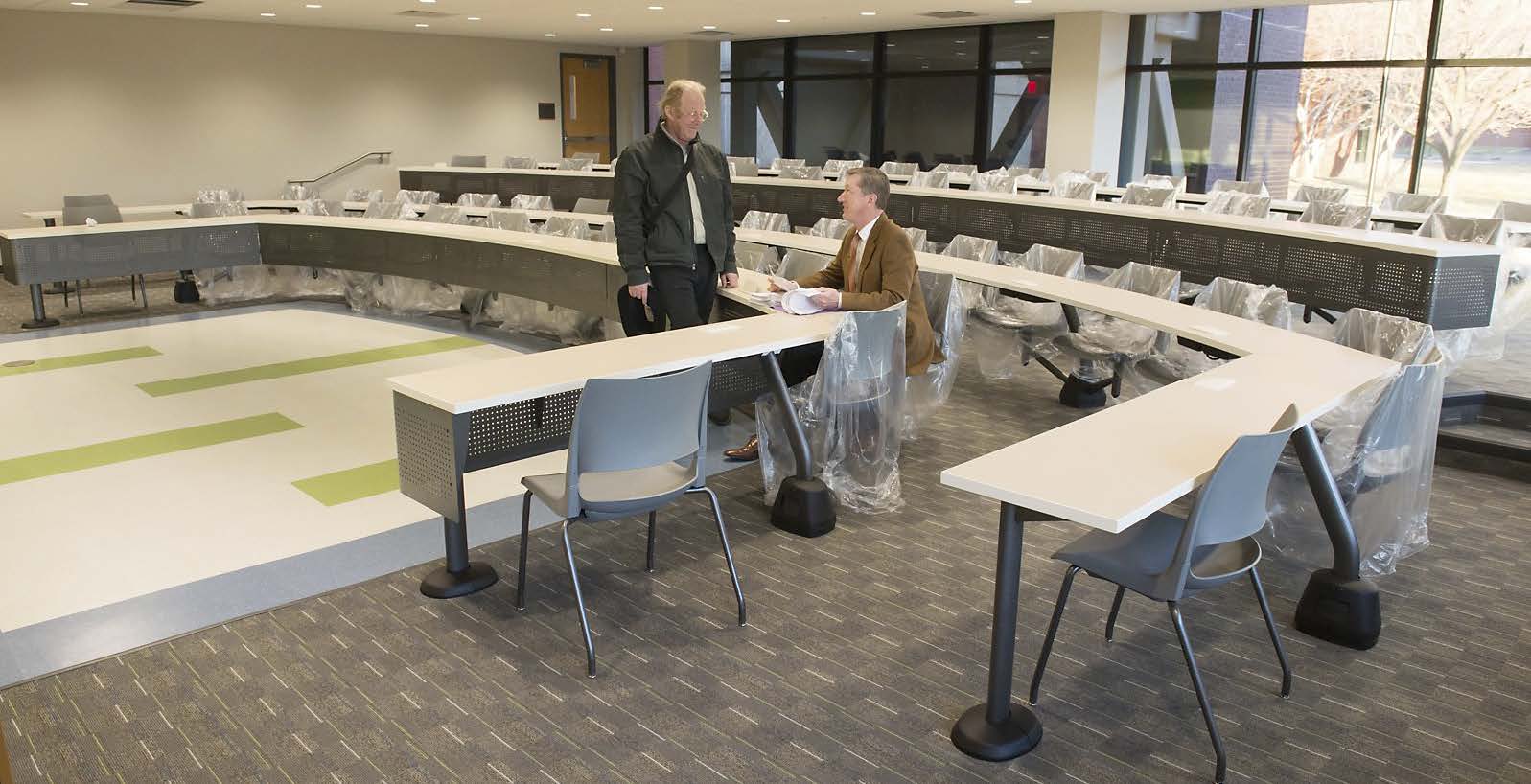 Facility delayed by state budget issues ready for its closeup

By DENNIS GRUBAUGH
About the time that many of this year’s freshman students were arriving in the world, SIUE began laying out plans to remodel one of the university’s oldest buildings.
Now, those students — 19 years old and counting — will soon meet the latest jewel on campus. Science Building East, a project fraught with unexpected challenges, is ready for its closeup.
“It’s the single-largest project that we’ve done and will change the nature of this campus, probably second only to adding housing,” said Rich Walker, the vice chancellor for administration, who has been involved with the project since the beginning.
Built in 1966, the Science Building was losing the race to keep up with the demands of a rapidly increasing enrollment. The building originally housed classrooms, laboratories for teaching and research, and offices for biology, chemistry, environmental science, math, physics and STEM curriculum. There simply was not enough room for it all.
The late-Sen. Evelyn Bowles recognized that problem in 1999 when she obtained a $350,000 member initiative grant that allowed for preliminary design on a project that evolved into two buildings. The first, a newly built structure, today called Science Building West, was completed in 2013. That allowed for chemistry, biology and environmental science to be shifted out of the original Science Building so remodeling of the 166,000-square-foot building could begin.
Although the design of the new building was approved in 2006, funding for it didn’t take place until 2009.
The money was appropriated in three steps with the biggest amount coming in the Fiscal 2010 budget year.
“The state appropriated $81.8 million, $52 million of which went to build a new science building,” Walker said. “The remaining $30 million went toward the renovation of the old building for use by math, STEM and physics.”
That renovation was well along — but far from complete — in June 2015 when the university got jaw-dropping news regarding the Illinois General Assembly’s budget impasse with the governor.
“We got the notice at the end of June that all construction must cease. Contractors wouldn’t be paid after June 30, 2015. That was a blow,” Walker said.
It was the middle of the university’s summer. The big auditoriums were torn up, and classes were to start in a few weeks.
“We’ve got students registered, starting to pack their suitcases, starting to head to campus for August classes in a building that just went into a budget freeze,” Walker recalled.
Barricading things was not an option.
“I couldn’t just tell 4,000 students, ‘Sorry, you can’t take classes this fall.’ Devastating would have been an understatement,” he said. “The auditoriums were the critical element. We have to have them every fall and spring semester. They are just booked all day long.”

SIUE and others reached out to the Illinois Capital Development Board, which contracts and pays for the work. SIUE was insistent that enough money be made available to finish the auditoriums, which were scheduled to be used not just by science majors but by every student needing science credits toward general studies. Students in the nursing and pharmacy and engineering programs also need the space.
“They worked with us,” he said of CBD. “The agreement allowed SIUE to front the money for the auditorium renovation. In the event the funding got turned back on, we would get reimbursed.”
He added: “As much as was needed” was key to the negotiations. The university ended up fronting $648,395 and finishing the auditoriums — but nothing else, for a year and a half, while budget talks at the state level went nowhere.
Walker likes to think of the project as three wings. The A wing is for offices. The B wing is for auditoriums and the C wing for the labs and classrooms.
“The A and C wings remained on hold, while the B wing we could continue to use,” he said. “I had people in temporary spaces for offices and classrooms elsewhere on campus.”
As things dragged on, the project site got to looking a little rough.
“It was a year and a half.  It was boarded up with construction fences around it and grass growing behind them. Construction materials sitting on the ground. It looked awful,” he said.
CDB was consulting with its own lawyers trying to figure out what to do and there was no guarantee that the money would ever be forthcoming. No one knew what the legislature would do.
SIUE recognized it was taking a risk, but felt secure enough in its decision to move forward.
“We thought surely it would be a small risk because we couldn’t be the only ones out there with half-built buildings,” Walker remembers.
SIUE finally did get a check, about two months after the state approved a budget in August of 2017.
Walker credits Sen. Bill Haine, D-Alton, — Evelyn Bowles’ successor in office — with getting SIUE on the list for projection completion when the funding was turned back on.
“The biggest obstacle really, beyond getting the initial construction money, was when we hit the budget impasse,” Walker said. “Other than the funding issue the science complex projects have gone along very well.”
The building is just about done. The B wing is in full working order. The A wing will be ready for faculty to move in as soon as the semester is over in the spring.
Some faculty may want to move in sooner, and “we can make that happen,” he said.
The renovation includes all of the building’s utility systems as well as reprogramming the spaces for offices, classrooms and laboratories, installing fire suppression and meeting ADA compliance requirements. Seismic safety work also was done, with exterior bracing designed to blend in.
Some classes will begin in January and the rest will begin in August.
“We don’t have the furniture or the IT completed but that should finish off in the next month and a half,” Walker said.
The state appropriations included $874,000 for building equipment.
Ceremonies to dedicate the building will probably take place in the fall, he said.

Your business could be a spammer (and it might cost you)