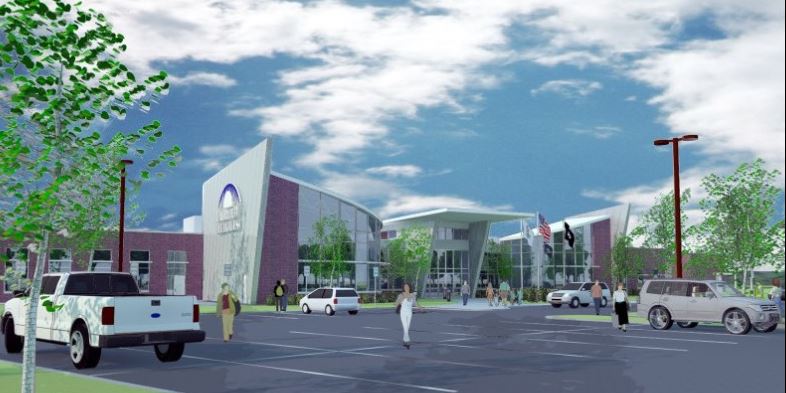 FAIRVIEW HEIGHTS – When the city of Fairview Heights began moving forward with plans to build a recreation complex, it looked for a construction partner with long standing ties to the community, someone they could trust to help make their vision for this new facility a reality.

“A couple of years ago when Mayor Mark Kupsky came in, he had a lot of new ideas for our city and a recreation center was one of them,” said Angela Beaston, director of Parks and Recreation for Fairview Heights. She said the 30-acre site for The Recreation Complex, Fairview Heights’ 58,000-square-foot indoor/outdoor rec center, is the former location of Our Lady of Assumption Church at Bunkum Road and Interstate 64 on the city’s west side. Grant School District 110 purchased the property after Our Lady merged with St. Albert the Great to form Holy Trinity Catholic Church and School on Fountains Parkway.

As plans for the future recreation center progressed, the city hired Sports Facilities Advisors to conduct a feasibility study, Beaston said. Out of that study came recommendations for what the $18 million project would entail. At that point, she added, the city chose local architect, EWR Architects Inc., for the design and began interviewing various construction management firms. Holland Construction Services’ experience in building rec centers in the St. Louis region gave the city confidence that the company was a smart pick.

“What really attracted us to Holland was that they’ve built so many projects of this nature,” Beaston said. “Holland has experience in making recreation centers happen, and we felt very comfortable in the work they’ve done in this specialty area,” she said. City staff visited the Bridgeton Recreation Center – a slightly smaller yet similar type of project that Holland recently completed – and were impressed by what they saw, she added.

“We really, really liked it,” said Beaston, referring to the 56,000-square-foot Bridgeton center that Holland completed in early 2016. “Other construction companies were certainly also qualified but we chose Holland not only for their experience, but also because it’s easy to work with them. Everyone at Holland that we’ve worked with so far couldn’t have been nicer or more understanding of what we want our project to be. Holland’s pre-construction department’s management of the estimating and subcontractor bidding process resulted in a project that met our goals for the recreation center within our budget. We’re confident in Holland to meet our ambitious construction timeframe,” she said. “Our target date for completion is February 2019, which is the city’s 50th anniversary. This new center, recently branded as The REC, will be the location of our kick-off celebration.”

Holland Project Executive Ryan Savage and Project Manager DJ Weymouth said the builder’s goal is to work as a relationship-based contractor rather than a low-bid contractor.
“We truly take a team approach with every project we build,” Savage said. “And that team not only includes Holland, but also our architectural partner, our subcontractors, our suppliers and most definitely our client, in this case the city of Fairview Heights. We believe in bringing everyone into the process as early as possible, and building those relationships early on as well.”

Holland has a long history of building projects in Fairview Heights. Over the past 10 years, some of the larger Holland projects include the new Hobby Lobby, Kirklands, Fairview Heights Engine House No. 2 and Holy Trinity Catholic Church and School.

Holland Construction Services is a construction management, general contracting, and design/build firm based in Swansea. Holland has been providing construction services throughout the Midwest since 1986, when it was founded by company CEO Bruce Holland.