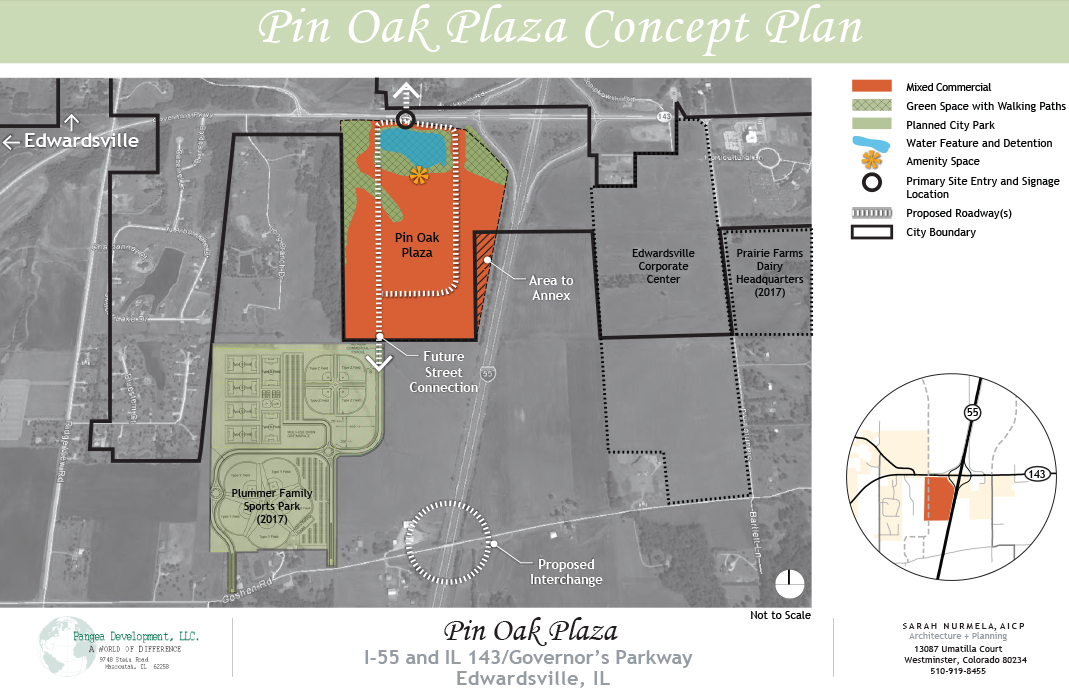 By DENNIS GRUBAUGH
EDWARDSVILLE – A mixed-use development along Illinois Route 143 and Interstate 55 is about to move to the front burner with significant progress anticipated in the coming year.
A planned, four-way signalized intersection will mark the entrance to Pin Oak Plaza, a 95-acre project planned just west of the interstate. The location is just across from where Blackburn Road exits onto Route 143. The stoplight is considered crucial to the development site, which features a lakeside setting and is expected to have a hotel, two restaurants, a travel plaza and the potential for much more, said Sean Goding, president of Pangea Development Co.
The site is privately owned, and Pangea has secured a master developer for the project. It will be a joint partnership between C.W. Byron Properties, L.L.C. and Plocher Construction Co., which will own, manage and perform the site development work.
Construction was scheduled to begin last summer but was delayed by due diligence studies involving access, surveys, soil boring, hydrology, wetlands and cultural research. Talks have involved the city, county, state and federal jurisdictions.
“Those things have taken more time than expected,” Goding said.
No significant archaeological results were found. However, analysis of traffic flow led to a decision to move the existing entrance to the site.
“It’s going to be a little further west, to avoid stacking issues with the interstate, so the traffic doesn’t back up,” Goding said.
The shift does not impact the overall plan, but it does affect some of the layout. The lake, too, is going to be redesigned so it is positioned further to the rear, allowing more frontage along Route 143.
“They are going to fill in some of it and dig out more behind it, to the south, toward the (Plummer Family) Sports Park,” Goding said. “It will be enough to accommodate 1-acre lots in the front. They really want to use the frontage on 143 because there is so much visibility there.”
He added: “Based on our (latest) meetings, everything seems to be positive. The studies are all finished. The timeframe that came out of them is workable with the developer, and they feel they will be ready for rough grading and dirt moving in early 2018.”

The title is expected to be transferred to Pin Oak Plaza LLC, the development holding company, about the same time, Goding said. Under the agreement the LLC will purchase 25 acres in the first phase and have an option to purchase the remaining 70 acres.
The plan calls for a four-way, signalized intersection at the entrance to the park because of anticipated traffic flow with both the business park and the 78-acre sports park. The city is in the middle of archaeology studies right now, and the initial development package for the sports park was recently approved by the city.
Crawford, Murphy & Tilly is serving as engineers for both the sports park and business park, Goding said, pointing out there is synergy in planning because of it.
“That’s all moving full force in tandem with ours,” Goding said. 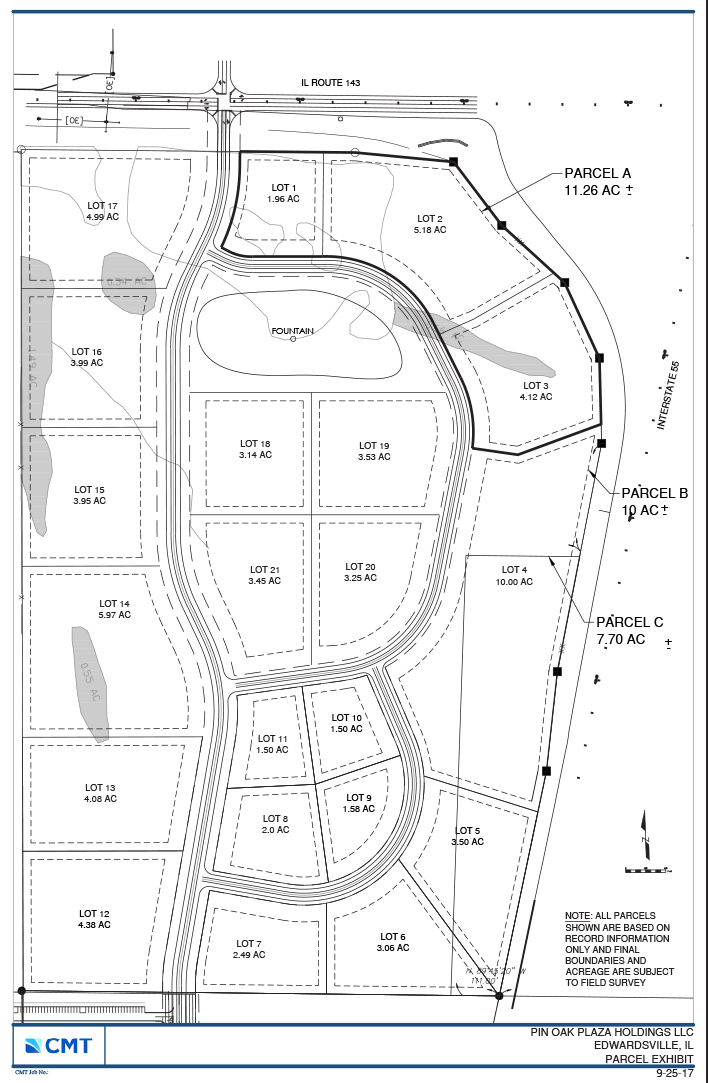 The planned intersection will be the only ingress and egress for the new sports park unless drivers access it further down, off Ridgeview Drive or Goshen Road. Any traffic coming from I-55 would likely access the sports park via the business park main road, still to be built.
Details on how the road will be built and paid for are still to be determined.
The city’s master plan calls for residential growth southeast and southwest of Goshen Road. The ideal would be to have an I-55 interchange built, exiting onto Goshen, a concept that’s been on the planner for many years.
“Things are going to take off,” Goding said. “With the sports park, with the business park, with Edwardsville Corporate Center (across I-55, the site of Scott Credit Union and others.) They’re going to eventually need that interchange (to the south).”
The original concept for Pin Oak Plaza called for light industrial and warehousing, but that ideal does not fit in well with the city’s I-55 Corridor Plan. Because of that, marketing is now focused on data logistics, high-end office space and supporting industry, including medical.
“It would be an excellent medical location,” Goding said. “A lot of hospitals and medical providers are going interstate specific. Just look at O’Fallon and the Medical Mile. We’ve reached out to players on the west side to see if there’s any interest there.” The sports park presence could also be used to lure a sports therapy business component, he said.
A national name hotel is expected to be formally announced early in 2018. The developers also are working on two restaurants and a travel plaza. A large retail user from Tennessee is also looking at it for a “lifestyle center,” potentially to take 10 to 35 acres, he said.
Goding said he has to remain lowkey on the names of all the prospects, but he’s convinced that once the “first guy is in, everybody will want to get in.”
Developers want to break ground in the first quarter and have the first construction going full bore by June, he said.
Pangea Development, LLC was formed in 2005 as a land investment, development and management company specializing in the development of ecologically sensitive and LEED certified commercial and residential real estate projects. The company currently has offices in Mascoutah and in Hazelwood, Mo.

Lawyers help others through Bar Foundation

POINT: How much should attitude and appearance weigh on the job?

COUNTERPOINT: How much should attitude and appearance weigh on the job?