By DENNIS GRUBAUGH
A mammoth ground storage tank and improvements to a water system spread across several miles will accommodate the growth of Troy for many years, officials say.
The planned project will cost $9 million to $9.5 million and was 11 years in the making, but city officials said the wait will be worth it — both in terms of costs and service.
“We were always conscious of our ratepayers. We think we’ll produce water for about the cheapest rate of anybody in Metro East,” said Mayor Al Adomite.
A host of dignitaries broke ground on one part of the project last month, a 2-million-gallon concrete ground storage tank and booster pump station being built within view of the current Troy water tower along Illinois Route 162.
The second part of the project is retrofitting the 38-year-old water plant located on United Drive in Collinsville, which will account for most of the expense, about $6 million.
The project was long in the works and stalled out in earlier considerations because the price tag was coming in way too high, the mayor said.
“We stepped away from a $13.3 million improvement where we were going to bring our water plant all the way to Troy and put new line in the ground, which was going to be very expensive, about three and a half years ago. We stepped away from something we thought was too expensive and in the end came back with something that’s going to save us about $4.5 million dollars,” Adomite said. “I want to give a lot of credit to our council and our staff and Rob Hancock, who is now our public works director but at that time was our water supervisor.”
The city started planning the improvements in 2006.
The contractor for the plant work is L. Keeley Construction, of St. Louis. The contractor on the booster station is Highland-based Korte & Luitjohan Contractors.
Gonzalez Companies provided engineering services for the redesign of the city’s water treatment plant, which includes new high capacity water filtration equipment; filter backwashing facility modifications; a new 500,000-gallon clear well/water storage tank; electrical and instrumentation upgrades; design of a high-service pump station; site security; and site improvements. In conjunction with the plant upgrades and the ground storage tank and booster pump station, a new 16-inch water distribution main will improve water flow and pressure to the city.
A key in the considerations was Troy’s growth.
“We’ve had good growth,” City Administrator Jeff Soland said. “You kind of gauge about 20 years ahead of time, and we hope that what we’re building is going to take care of us for the next 20 years. When the plant was built we had 2,000 or 3,000 people in Troy. Now we have a little over 10,000. That’s been 30 to 40 years. We’ve made changes and improvements to the plant over the years but we’re just at a point where we produce a certain amount of water per day and we need to produce more.”
Rates were increased starting in May to begin recovering the costs. The increase is about $3.92 a month on average for a 5,000-gallon consumer. It had been 15 years since the last increase. Rates are based on volume of usage.
“This keeps us at one of the competitively lowest rates in Metro East — and we’re still going to double our amount of production,” the mayor said.

Bank of Edwardsville is serving as financing partner on the project, offering a 20-year loan for $10 million at 3 percent interest.
The water plant in Collinsville is being outfitted with newer technology, featuring a high-pressure vertical filtration pump with filters that will be half the size and take up half the area and yet double the amount of filtration.
The new, 2-million-gallon ground storage tank will eventually allow Troy to have 4 million gallons of water at any time to pump through its lines. The new unit will replace a 600,000-gallon tank now located near the bike path at Old Troy Road and Route 162 in Troy as well as a smaller, elevated water tower near Interstate 55-70 and Illinois Route 159.
The mayor gives a lot of credit to Gonzalez engineering, which was sought out when the city decided to bid out the project a second time. Gonzales “did a fantastic job for us” and listened intently to city officials, Adomite said. The result was a proposal that was ready to go to bid again.
Past and present council members were present for a groundbreaking held last month next to the large water tower, within view of the Dairy Queen on Route 162. That’s where the new ground storage tank will be built. The tower next to it will remain in place.
“The reason for (two tanks) is that if we have a water issue, we’ll need to store as much water in Troy as possible. Instead of storing it down in Collinsville,” Soland said.
The water service coming from the Collinsville plant comes to Troy along a corridor that primarily follows Interstate 55-70. It crosses over and moves toward Route 162 once it reaches U.S. 40 at Troy. The distance is about seven to nine miles.
Troy still has a lot of ground to develop, and the water system is the right thing to address, Soland said.
“Absolutely. Depending on how far you want to annex, we can go east without a doubt; go south unquestionably; and we have room to go north as well,” he said. 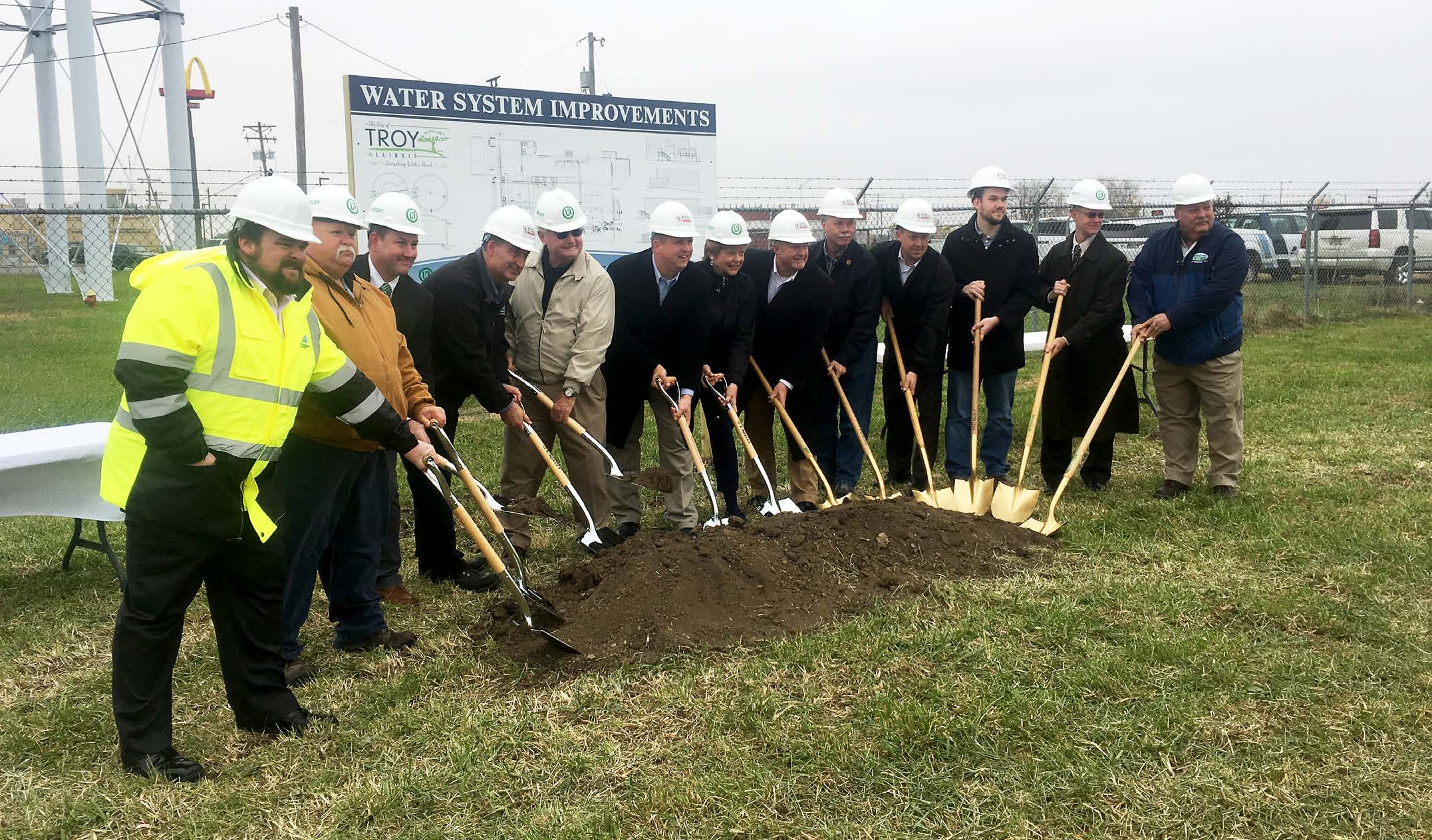 First-time entrepreneurs will be able to save money on state licenses and permits under a new pilot program. The entrepreneur learner’s permit program was introduced and sponsored in the Illinois Senate by State Sen. Linda Holmes, D-Aurora.
The Senate recently voted to override Gov. Bruce Rauner’s changes to the pilot program. The original version of the legislation minimizes spending by creating a pilot program to subsidize first-time entrepreneurs in information services, biotechnology and green technology with a state spending cap
of $500,000.
The governor used his veto power to remove the spending cap and expand the pilot program to include all industries. Holmes says that the governor’s amendatory veto turns a smart business development measure into a potentially wasteful program.
The entrepreneur learner’s permit would encourage small-business growth by reimbursing first-time business owners for certain costs paid to the state for licensing and permits. The Illinois legislation is a pilot version of a similar program established by the Connecticut State Legislature in 2016.
After veto override votes in the Illinois Senate and House of Representatives, Senate Bill 1462 is now law.

SPRINGFIELD – Active substitute teachers will be able to seek a refund of the $50 fee they’re required to pay when they apply for a state license under a new law sponsored by Sen. Andy Manar, D-Bunker Hill.
“This is an example of what we can do to ease up on the government bureaucracy that’s got a stranglehold on the teaching profession in Illinois,” said Manar, a member of the Senate Education Committee. “We have empty classrooms because of a statewide teacher shortage, a rapidly shrinking pool of substitutes and students who are suffering as a result. Curbing fees and eliminating unnecessary red tape will help address some of these problems.”
The Senate voted 53-0 to override the governor’s veto of House Bill 3298. The measure authorizes a refund of the licensure application fee for substitutes as long as they can offer evidence of teaching at least 10 full school days within a year of being licensed. The law is now in effect.
School districts statewide are experiencing difficulty recruiting and retaining qualified full-time and substitute teachers.

Lawyers help others through Bar Foundation

POINT: How much should attitude and appearance weigh on the job?

COUNTERPOINT: How much should attitude and appearance weigh on the job?