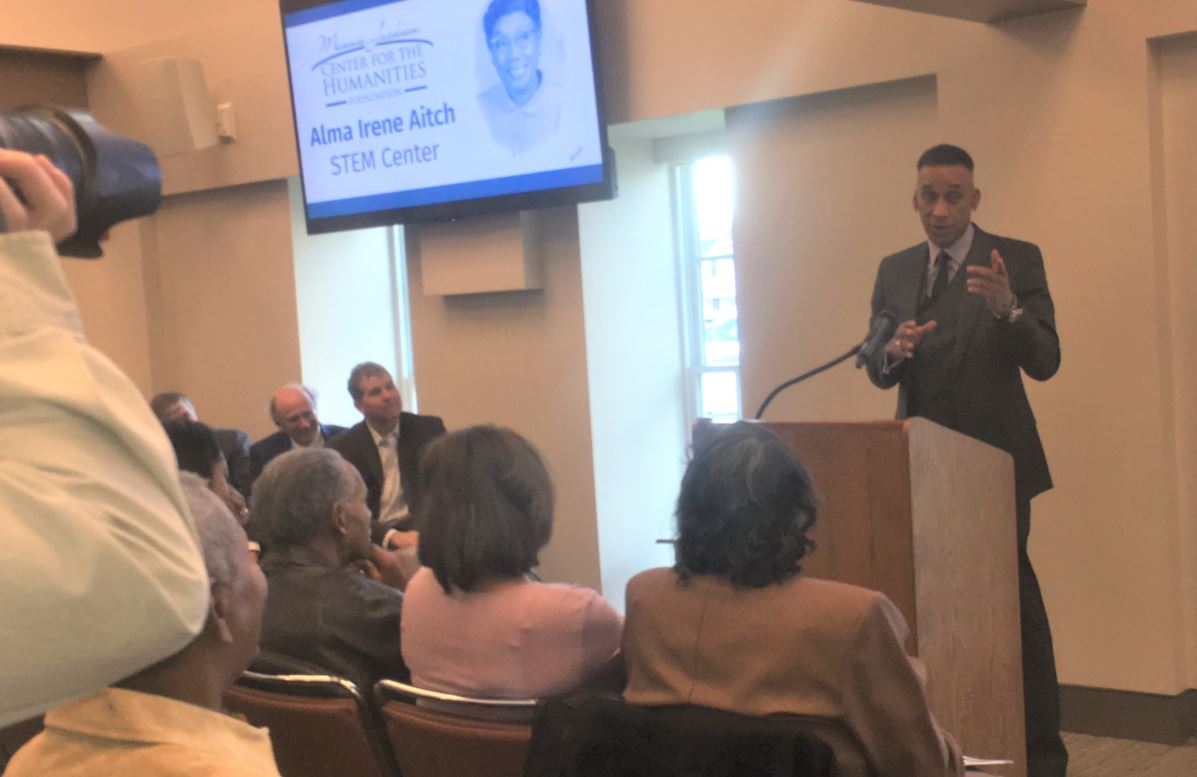 EDWARDSVILLE — STEM curriculum will be the means for humanity to solve its greatest problems, Mannie Jackson says.

“It’s my sincere belief after all these years that we’re heading to a period now where the complexity of this planet, the complexity of humanity, is getting so hard that the first thing you’re likely to do is fight, marginalize, call names, build walls around yourself because these problems are hard,” said Jackson, 78. “I believe that when they start having these STEM centers all over the country, and it comes to complex problems, they’ll say, ‘Bring on the complexity of humanity.’ If it’s about the environment, the water, energy, overpopulation, the criminal justice system — we can handle it because science and math gives you that ability to do it.”

Jackson, the founder of the Mannie Jackson Center for Humanities Foundation, was among those who spoke Wednesday at the opening of the Alma Irene Aitch STEM Center, named for a longtime teacher at Lincoln School in Edwardsville, the historic black school on Main Street that Jackson attended and eventually acquired before partnering with Lewis and Clark Community College to renovate it into the humanities center.

A second historic structure, the Kraft Building next door, has now been remodeled and will serve as the hub for a STEM program initiative that will be rolled out into all Madison County schools, in conjunction with LCCC, Southern Illinois University Edwardsville and the Madison County Regional Superintendent of Schools Office.

A large crowd of dignitaries, former Lincoln School classmates and others gathered Wednesday to mark the opening of the STEM center, including the family of the teacher lovingly called “Miss Aitch.”

Among them was her nephew, Harry B. Shaw, who said the center will serve “as a reminder of her indelible role in the gift that Lincoln School was and now is to the community of Edwardsville.”

“By the time I was born in 1937 in Union, Mo., Alma Aitch was already a veteran teacher,” Shaw said. He spoke fondly of a woman who had an impact on generations of students.

Aitch taught at what was called Lincoln Grammar School from 1924 to 1951.

The STEM Center will take up topics dealing with science, technology, engineering and math. Planned among other things are a Digital Humanities Club, which will be offered in the fall for middle school students in Madison and Venice. Students will be able to create content through podcasts, websites and documentaries to show subjects they are passionate about in their communities.

A Math Games League will use a mentor model to provide opportunities for students in Alton, Venice and Madison and Brooklyn.

Urban gardening is slated to begin in spring 2018 for elementary age girls in Madison County housing.

The LCCC Swarovski Waterschool will educate students about the human connection to and reliance on water ecosystems.

Robotics will also be offered in 2018 in partnership with SIUE and Madison County.

Jackson, a superstar athlete at Edwardsville High School and later University of Illinois, went on to play for and own the Harlem Globetrotters. He was also a top executive at Honeywell Corp. It was a pre-college aptitude test that showed him that he had a knack for science — and not just a huge vertical leap on the basketball court, he said.

“I became a different person,” he said. “I was confident. There was no problem I couldn’t solve.”

Anyone with questions about the Alma Irene Aitch STEM Center can contact program coordinator Candice Johnson at (618) 650-3502.