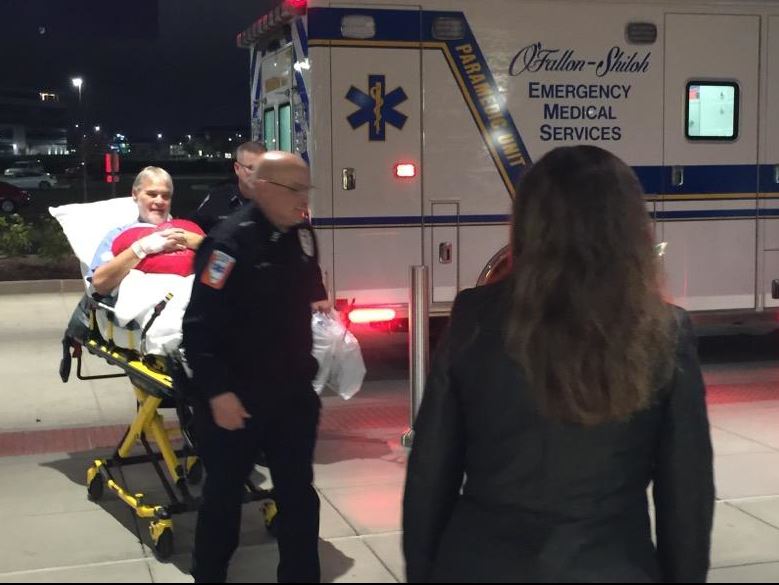 O’FALLON, Ill. – While everyone dislikes being admitted to a hospital, Daniel Thelen of Belleville had the unique experience of being the first person admitted at the new HSHS St. Elizabeth’s Hospital in O’Fallon.

Thelen has been a patient at HSHS St. Elizabeth’s Hospital in Belleville, since moving to the area in 1983. He had open heart surgery earlier this week at the Belleville hospital location and was starting rehab on its fifth floor Comprehensive Rehab Unit. Since he was not yet ready to be discharged, he and all of the other inpatients were informed that they would be transferred to the new St. Elizabeth’s Hospital in O’Fallon on their opening day of Nov. 4. Through the careful assessment of all the patients by the move planning task force teams, Thelen ended up being the first patient to enter the doors of the $300 million facility. 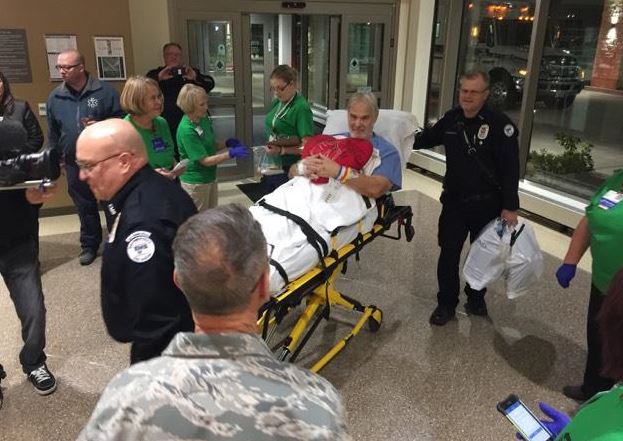 The hospital began moving patients on Saturday around 5 a.m. with the assistance of 23 ambulance rigs. O’Fallon Incident Commander Donna Meyers, RN, described how the patients were moved from the Belleville hospital to the new hospital in O’Fallon.

“St. Elizabeth’s partnered with several local ambulance agencies from across their service area for the move. A nurse accompanied each patient in an ambulance on the trip from Belleville to O’Fallon to ensure safe, quality patient care,” she said. “Scott Air Force Base also served as a valuable partner in this move, with their personnel assisting in communication with inpatients and their families prior to the move as well as helping with logistics during the move.”

Thelen said he is pleased with his care at both locations, St. Elizabeth’s Hospital in Belleville as well as in O’Fallon, and noted that “it was the way (he) saw all colleagues working as a family, that made the day so special.”

Thelen will recuperate in the newly opened St. Elizabeth’s Hospital. He will be experiencing his therapy sessions in the expansive fifth floor Rehab Gym, which has floor-to-ceiling windows to provide patients with scenic views.

In a well-coordinated move involving several area EMS agencies and the assistance of Scott Air Force Base personnel, all 56 patients of St. Elizabeth’s were successfully transferred by ambulance, from St. Elizabeth’s current facility in the 200 block of South Third Street in Belleville, to the new hospital, located along Interstate 64 and North Green Mount Road in O’Fallon.

All patients were safely settled in their rooms by 9:15 a.m. and each received a rose and a commemorative rose pin for their patience and understanding during the move. Family members were escorted by St. Elizabeth’s Hospital and HSHS Southern Illinois Division colleagues and leaders to each patient’s room.

Hospital administration and colleagues have been making preparations for over a year to ensure safety, efficiency and communication for patients and family. Coordination of the move was conducted through the activation of two Incident Command Centers at 2 a.m. on Saturday, one set up in Belleville and one in O’Fallon. St. Elizabeth’s continuously trains staff under the Hospital Incident Command System, which is an incident management system that hospitals use to manage emergencies or large-scale, planned events.

After all patients were transferred to the new facility in O’Fallon, St. Elizabeth’s Hospital colleagues that were assisting with the move from Belleville gathered in a meeting room at the Belleville campus for a brief prayer led by President and CEO Peg Sebastian. Following a careful sweep of the Belleville hospital location, the building was secured.

PHOTOS: Daniel Thelen of Belleville was the first patient admitted to the new HSHS St. Elizabeth’s Hospital in O’Fallon. He is surrounded by HSHS St. Elizabeth’s clinical staff and Scott Air Force Base personnel assisting with the move. Peg Sebastian, back to camera, top, the hospital president and CEO, was among those waiting to greet him.