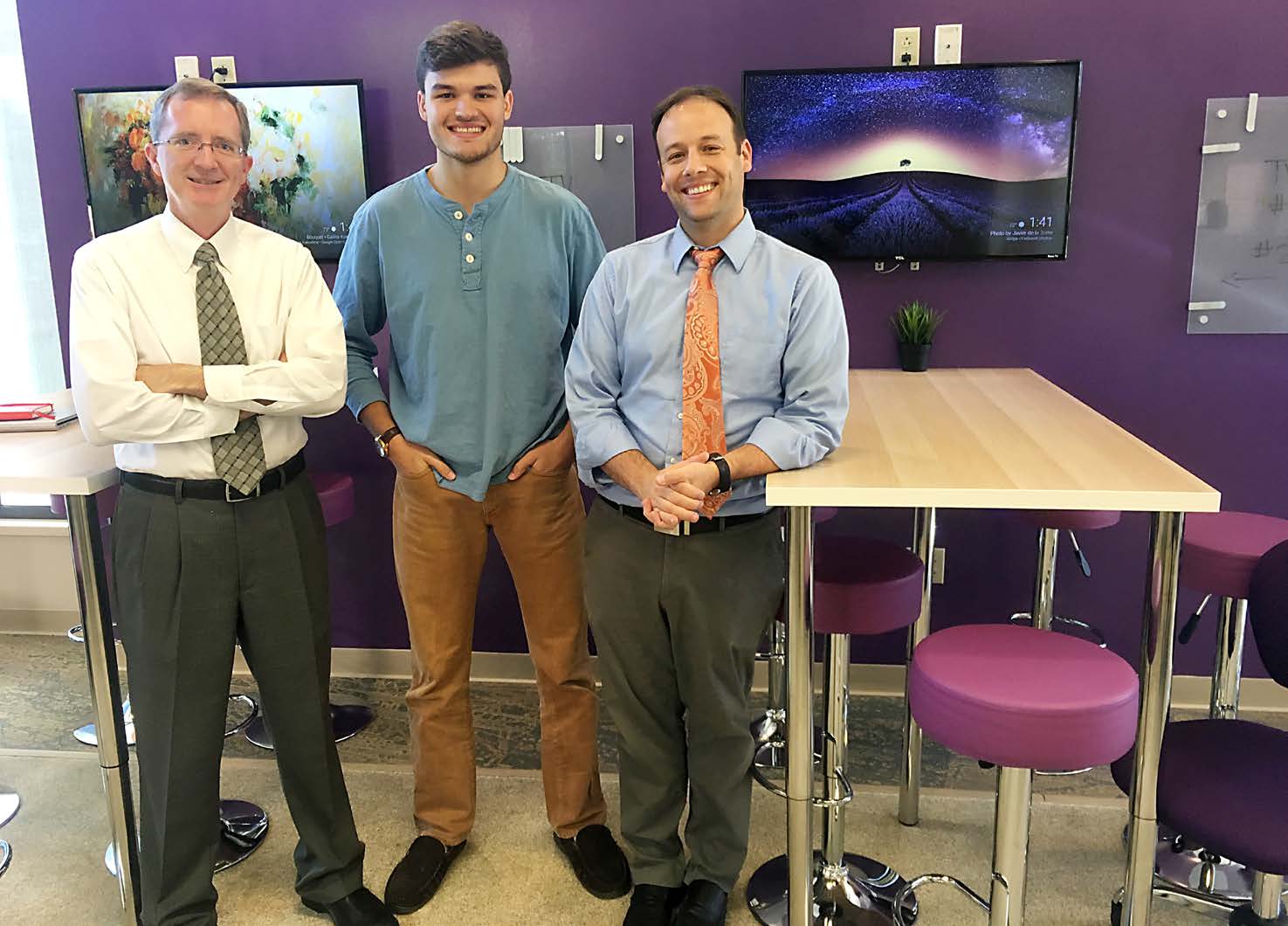 By DENNIS GRUBAUGH
LEBANON — When George Kriss suggested to the students of his management information systems class that they plan out the idea of an Active Learning Center on the McKendree University campus, he was hoping to make the best of a progressive, yet fun assignment.
He underestimated the results, to say the least.
The concept the students came back with was so impressive that it received the approval of the university president, led to the actual creation of the center and has become so successful that a larger project is in the works.
And all because Kriss was scrambling for class ideas at the beginning.
“I actually found out I was teaching this class about 12 hours before I started. I didn’t even have a syllabus to go off of,” he recalled. “I remembered the best classes I ever had were ones that engaged you.”
He thought back on an earlier conversation with President Dr. James Dennis, who had a vision of one day having a business room on campus where students “could go, see some stock tickers, and some flash,” Kriss said. “I thought that was great, but at McKendree every space is versatile and adaptable and open to everybody. I tasked the class with a couple of different projects.”
Students jumped on the idea, went around campus to find the best space, took surveys, and narrowed down the options. They interviewed all kinds of people — students, professors, others — on what they’d like to see done. The space chosen was an outdated, little-used fitness center in New Residence Hall West. It was about the size of a very large classroom.
The idea was to form a center where students and campus groups of all varieties could collaborate in a single space. Kriss had assigned two project managers and three team leads, among other students, focusing on technical, design and marketing and research components.
Students devoted nine weeks to the project this past spring.
One of those who rose to the occasion, and subsequently worked a lot of overnight hours on the effort, was Robert Watkins, a business administration major from Chicago and one of the project managers.
“We looked at different universities across the country to get some inspiration from them. But then we realized it was going to be a unique situation, and everybody was going to have to be able to use this,” he said.

Active learning is a new style of education where the professor steps away from the front of the classroom and serves more as a mentor and guide. Students form team, share laptops and collaborate. In the room eventually chosen, there is no row upon row seating like a lecture hall.
The students refined their ideas down to something that was flexible for use in educational, professional and recreational activities, with technology as a backdrop. Watkins said planners did “digital mockups” of the space and talked to a lot of professors for input.
Part of the work included drafting of budgets by the students, who presented their numbers to the instructor. In the end, relatively little money went into the project, compared to what you would see at other schools.
“Harris-Stowe College did a room with stock tickers and computers, and they had a grant and I think spent over $20,000. With all due respect to them, it’s not what we were looking for. This is what we were looking for,” Watkins said, glancing around the Active Learning Center.
The price at McKendree was a more modest $6,500, with virtually no overhead.
The students had to make some compromises, Watkins said. The president’s idea of a stock ticker for an all-business environment was given as an option but in the end, didn’t make the final cut.
An official presentation was made to the president, all the vice presidents and others.
“A lot of the professors were very excited about it,” Watkins said.
Students turned in everything they’d gathered for the class project and left for summer, thinking their job was done. They returned to find out that the president had signed off on the concept and they had to immediately make the project a reality.
“It had to be ready for the first day of classes,” said Kriss, who is director of Information Technology at McKendree. “We had a week and a half to spin this out.”
The technology and the collaboration were in place on Day 1, according to Daryl Hancock, the executive director of online programs, who joined McKendree this summer.
“We had the paint literally drying a day or two before classes started on the 28th of August,” he said.
Hancock said the classes began scheduling the space almost from the beginning.
“Within a week (of starting) we had three classes reschedule all of their times to meet in here. We’ve now got several clubs that are meeting here. We’re now up to five classes in the first eight weeks,” he said.
“And eight have already scheduled for next semester,” Kriss added.
“It’s used for really everything,” Watkins said, listing professional meetings, training, a student government retreat, and a business fraternity that uses it every Monday.
The groups were meeting in the Piper Academic Center on campus previously, but the new Active Learning Center is a lot more interactive than a classroom setting. There is one, large open room with both high-top and smaller tables, no walls, and some small couches to provide a laid-back vibe.
“It’s more collaborative, a lot easier to break off into small groups,” Watkins said.
Computers link the projectors and the televisions that line two outside walls. Multiple presentations can be underway at once.
Now, the men point out, students can literally watch a stock ticker on the web, if they so choose.
The space is being used “immensely more” than the fitness center that proceeded it, Kriss said. There was virtually no marketing other than word of mouth.
“We haven’t even put the hours on the window yet,” he said. “We wanted this to grow organically, to see how people would react to it.” Students are there at all hours.
Next up: The HUB, a larger, collaborative project now being constructed in the lower level of Pearsons Hall, in the center of campus. Kriss’ IT team, students and others are transforming the area for an even larger center for learning.
“We’re in the tear-down stage now and should have it done in the early part of 2018,” Hancock said.
The present Active Learning Center is being used as a pilot for the larger one. Supporters will study how the current one is used, what works and what doesn’t and apply it to the larger concept.
“This kind of space is a mind shift for the professors. They are moving away from the center of the classroom space and being in it. While these spaces are great for those who adapt to it, it’s not for everybody,” Kriss said.
Seed money is in hand to start the larger remodeling project and more money will be needed from donors and the university.

Like the little engine, rail park has lofty goals

Businessmen should not give up on cleaning out that email clutter

POINT: Is retail brick and mortar still a good investment for cities?