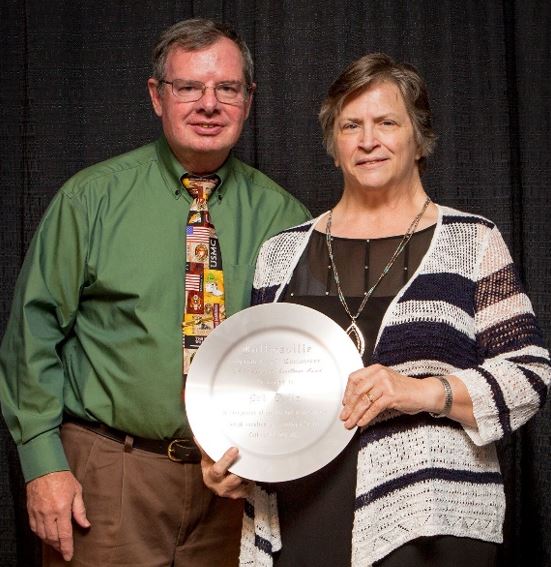 Pat Reitz, who created the Collinsville Hometown Heroes Banners project in 2016 and partnered with the city in honoring veterans, is this year’s winner of the Spirit of Excellence Award from the Collinsville Chamber of Commerce.

The honor came during the 2017 Collinsville Chamber Community Awards in October at the Gateway Center.

Pat Reitz created the Collinsville Hometown Heroes Banners project in 2016 and partnered with the city in helping honor veterans, living or deceased from the Collinsville area. The banners have been displayed throughout Collinsville main streets several times over the year and a half. The program and banners are dedicated to U.S. veterans.

“This year the Spirit of Excellence Award goes to an inspirational person. Pat Reitz is my hero for her passion of this project and all she has done to help honor these veterans and their families,” Collinsville Mayor John Miller stated. “She has brought our Collinsville community together to celebrate our heroes’ past and present but tonight, we are all honored to celebrate her,” Miller said.

A video link on the banner project can be found at https://www.youtube.com/watch?v=XkGpOzh54eY

The Spirit of Excellence Award has been established to honor those Collinsville men and women who have contributed to their community through their achievements. These achievements may be in the arts, architecture, business, communications, education, entertainment, government, law, medicine, social services, sports, volunteerism and other areas vital to Collinsville’s quality of life. This award is presented annually to one person whose achievements and long-term commitments of excellence during the past year have resulted in creating a better Collinsville for all of us. It is tradition that this award recipient is not announced until the evening of the presentation.

The Community Awards night also honored other businesses and leaders in the Collinsville area.