Fred Pierce, of Fayetteville, in St. Clair County, checked in for a flight to Fort Lauderdale, Fla. He was embarking on his first flight to the sunshine state with his wife Diane, who convinced him to fly and use Allegiant instead of making the drive like they usually do. Airport Director Tim Cantwell presented him with a certificate and a gift card to Eckert’s Country Store and Farm.

“This is a great milestone for the airport. We’ve moved up to the sixth busiest passenger airport in Illinois,” Cantwell said. 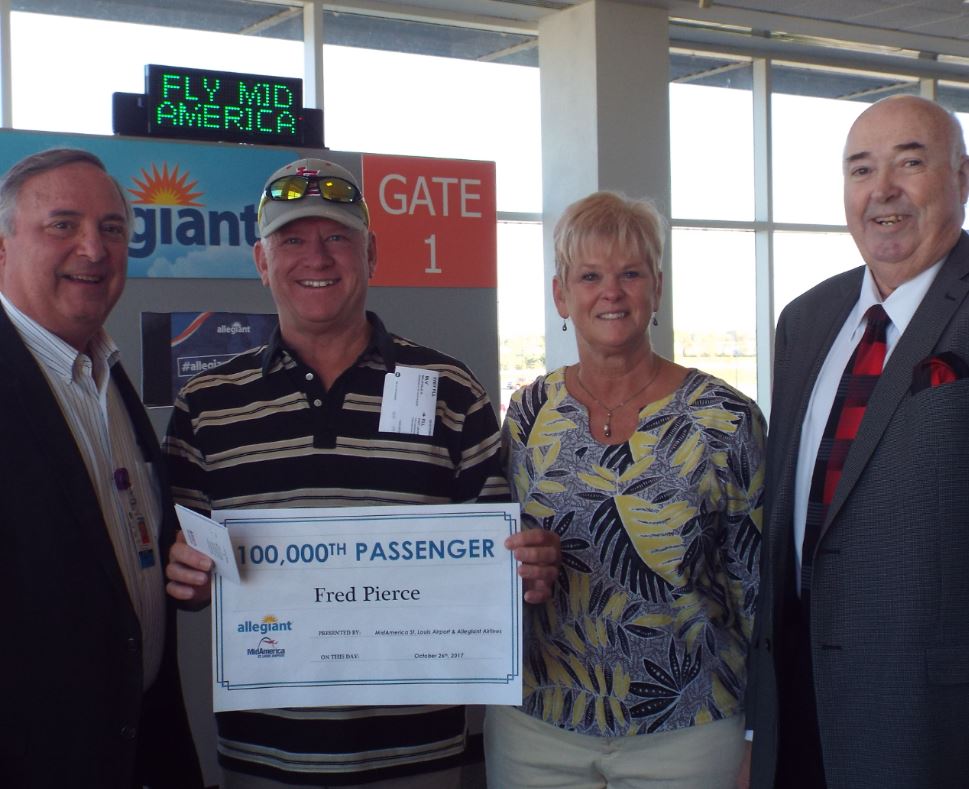 Based on the number of current flights using MidAmerica and the addition of direct service to Phoenix/Mesa beginning in mid-November, airport officials anticipate overall traffic for all of 2017 will be approximately 50 percent higher than 2016, continuing to build on the solid growth over the past couple of years.

The FAA released Preliminary Calendar Year 2016 Passenger Boarding Data in July, revealing a 145.44 percent increase in passenger boardings at MidAmerica for 2016 compared to passenger counts tallied in 2015. The data showed that MidAmerica St. Louis Airport (BLV) had the SECOND HIGHEST GROWTH of any PRIMARY AIRPORT IN THE NATION, as more than 157,000 passengers flew through MidAmerica in calendar year 2016, up from 63,000 passengers in 2015.

Furthermore, current Bureau of Transportation Statistics (through June 2017) show BLV now ranked at number 222 among 804 U.S. airports in departures and number 6 in Illinois (behind Bloomington-Normal and ahead of Rockford and Springfield).

Flight days, times and fares can be found at AllegiantAir.com

PHOTO: Fred Pierce of Fayetteville, Ill., was recognized as the 100,000th departing passenger to board a flight at MidAmerica St. Louis Airport during 2017 when he arrived to check in on October 26 for a flight to Fort Lauderdale, Fla. Fred and his wife Diane, who usually drive to the sunshine state, were flying out of MidAmerica for the first time, after Diane convinced her husband to fly and use Allegiant. Pictured from (L. to R.) are Tim Cantwell, director of MidAmerica St. Louis Airport, Fred and Diane Pierce and Brigadier General John Hughes, USAF, retired, a St. Clair County department director.