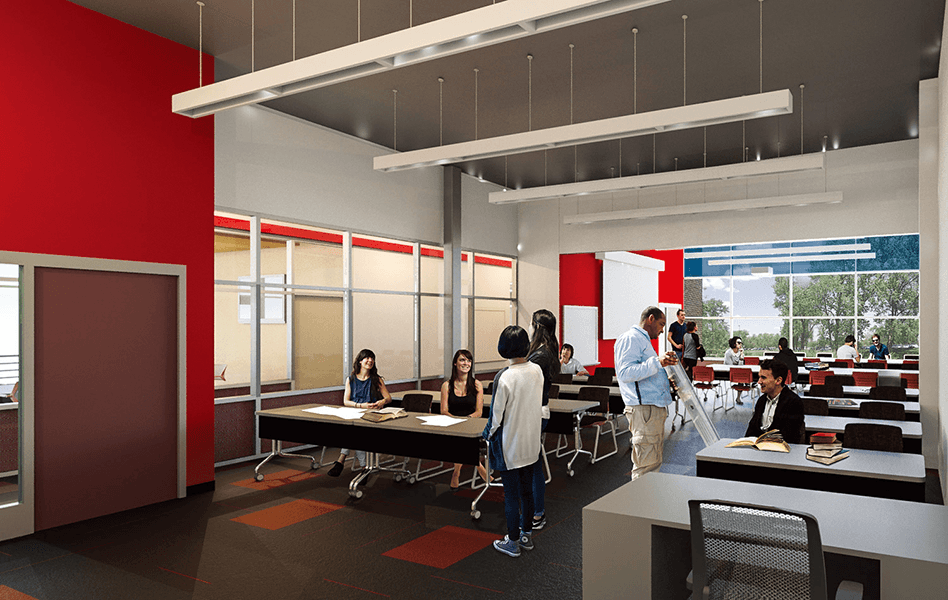 By DENNIS GRUBAUGH
EDWARDSVILLE — An ongoing expansion of the SIUE Engineering Building belies everything you’ve heard about budget problems with the state’s universities and the flight of students to other states. There is growth in some Illinois school corridors.
The two-story construction project will be the focus this month of SIUE Day, a fund-raiser for the Southern Illinois University Edwardsville Foundation. A breakfast meeting and tour of the new Student Design Center at the School of Engineering are planned, beginning at 8 a.m. Thursday, Oct. 12.
Most of the $5.7 million needed for the project has been secured, resulting in the completion of Phase 1 of construction. The school still needs about $1.2 million to fund the construction of Phase 2, which will include additional design labs, offices and meeting space on the building’s second floor.
The second phase relies heavily on private donations.
“You know the situation with the state budget,” said Cem Karacal, dean of the School of Engineering. “We were a little hesitant to go forward with the whole project without having full funding. At the same time, there was this pressing need for this space. So, we decided to divide it into two phases. Let’s get the first floor done, let’s get the shell for the second. As soon as we secure the money we will build the second floor.”
The second floor is a closed-in structure with as yet no interior walls, perfect for the upcoming, large reception. Guests will be told what they can expect to see in a finished project.
Certain areas of the building are to be named for key donors, among them The Korte Co., Nidec Motor Corp. (formerly Emerson Electric Manufacturing), and J.F. Electric Inc.
Karacal sees the situation as an opportunity to better connect with local industries.
“This is a mutually beneficial relationship. A lot of companies use our graduates, they hire our graduates. They are benefitting from the quality of the education they receive from us,” he said. “But at the same time we need it to finish this project. When you look at the whole operation it costs quite a bit to educate an engineering student.”
The investment is worth it.
“Show me a really prosperous area that does not have a competent, technical workforce,” Karacal said.
Engineering was one of the bright spots in the latest enrollment figures at the university, which were generally down from last fall.
“This is an important project and a reflection of the growth of the school,” Karacal said. “For almost eight years we’ve been growing at almost 8 percent each year. There are fluctuations but when you average it out it’s been almost 8 percent.” This fall was a modest increase, he said.
“When I came 10 years ago we were half the size school as we are now,” added Christopher Gordon, School of Engineering associate dean.
The original Engineering Building came about in the year 2000 as a matter of necessity. Before the main building was constructed, electrical engineering and construction management classes were taught at University Park, and the rest of the classes were taught in the basement of the original Science Building.

“At that time, the school had 600 some students. We have grown to the size that even this facility won’t accommodate it all,” Karacal said. There are about 1,850 students enrolled between undergraduate and graduate. Undergraduate enrollment is 1,609 this fall.
“A lot of people don’t realize we are the largest engineering school between (University of Illinois at) Champaign and (University of Missouri at) Rolla,” Karacal said. “In terms of headcount, we’re the largest engineering school in the St. Louis area.”
The design center is situated on the north side of the Engineering Building, constructed on what had been a one-story, 1,000-square-foot addition that was razed for the project.
Associate Dean Gordon said it was more economically feasible to tear down the original structure that trying to adapt it.
The new first-floor space has space dedicated to concrete engineering, rapid prototyping, 3D printing and electronics, senior design projects and more.
The second floor will have office spaces, conference area and design lab.
The new, two-story addition is alongside what is a four-level main building. The Engineering Building was built in stages, with the original phase constructed in 2000, and an extension with labs in 2013.
The general contractor is Bruce Unterbrink Construction.
Several student organizations have space in the building for working projects, including the solar car team, which last year took 10th in international competition. There are also mini Baja and Formula 1 race-car groups that regularly compete. Previously these organizations were spread out around the Engineering Building or elsewhere on campus.
“We have about 30 different student organizations within the Engineering Building,” Gordon said. Some are national societies, some are competition teams.
“The competitions are throughout the year, depending on the organizations,” he said. “For example, Concrete Canoe, GeoWall and Steel Bridge are in April. Solar is in the June to July timeframe. Formula 1 is in the May/June timeframe. Baja has races throughout the year.”
The proximity of student designers to each other in the new space will have them “feeding off each other and inspiring each other,” Gordon said.
Stressing teaching without stressing practical application of skills can be a detriment for students, Karacal said.
“It’s a common problem in engineering and education and not necessarily to our school, but what happens is they learn quite a bit about the science of engineering, but building things and making them work takes a lot of effort,” he said. “The environment we’ll have downstairs (in the new surroundings) will really encourage soft skills, and you can’t really teach them in a classroom setting. Things like leadership, organizational skills, teamwork, pooling resources together, working within time and budget constraints.  We are giving them an opportunity to sharpen those skills before they graduate, and a lot of students don’t realize those skills are as important as the technical skills.”
Educators and students are so caught up in GPAs and test grades that they sometimes assume they’ll pick up the practical side of business once they are in the work world. That doesn’t always work Karacal said.
“That’s a strength of our students and a reason they are resonating very well with the marketplace.”
Engineering interest in general continues to grow at SIUE, but two specialty areas, mechanical engineering and computer science, are leading the way. They are about equal in size and the largest programs of six departments with a total eight different degree programs.
And, mechatronics and robotics engineering has grown significantly in enrollment since it began last year, he said. Mechatronics is a  multidisciplinary specialty that mixes mechanical, electronics and computer engineering. It is associated most with automation robotics.
“As soon as we opened the doors last fall, 20 students signed up, and this year it’s close to 40,” Karacal said of the mechantronics program. “The term robotics is catchy by itself, but students really don’t know what it means.  We are offering this degree program to build expertise in a very specific area that in our view is up and coming.”
The School of Engineering has a couple of initiatives in the works to inspire students to become their own bosses.
“We want to make the school more entrepreneurial. In the past, we were busy trying to keep the quality of education up. We came to the juncture where we saw we had to do something for the entrepreneur. We are hoping, for example that in the near future we can offer an interdisciplinary program on entrepreneurship.” Many engineering students get MBAs as well to further their business acumen.
Karacal said that every year he sees senior projects that have the makings of a future business.
“It all starts in this building,” Gordon said. “You see the prototypes of their ideas. You can’t help but walk through the building and look through the labs and be inspired.”
The other initiative is in cybersecurity. “Our team met (in September), and there is quite a bit of interest in cybersecurity,” Karacal said.
Engineering programs mesh well with such a field, other schools have such programs, and SIUE believes it is in a niche market area.

POINT: Should Illinois legalize recreational use of cannabis?

COUNTERPOINT: Should Illinois legalize recreational use of cannabis?