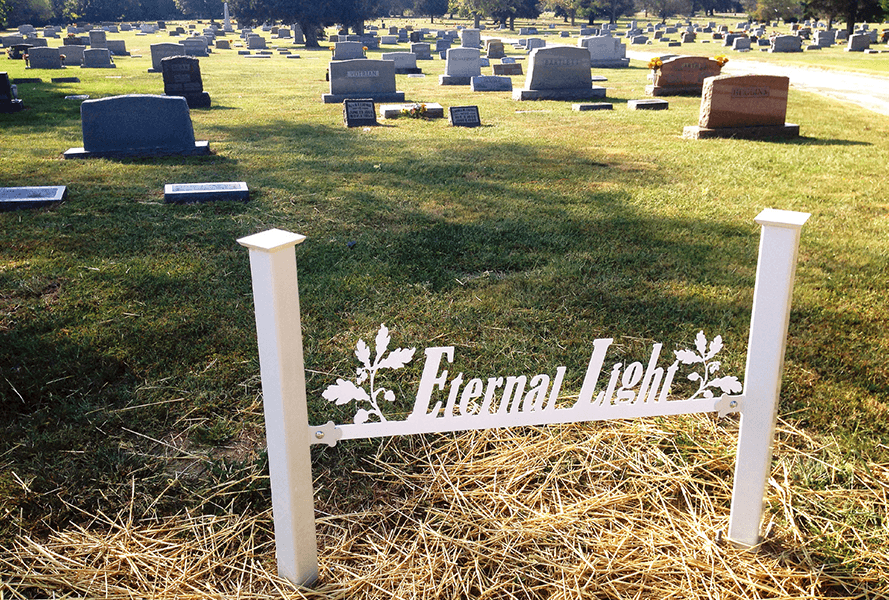 By DENNIS GRUBAUGH
EDWARDSVILLE — One by one, the guests sitting in a large circle in the back room of Main Street Community Center introduced themselves, telling others what brought them to the meeting.
For one woman, it was the distant memory of her mother and a grandson, as well as an infant sister who died in 1929.
For another woman, it was the thought of her late husband and several members of his family.
As each person moved on to the next, a personal list was recounted of loved ones buried in Valley View Cemetery in Edwardsville.
Now, the survivors want to know: What will happen when it comes their turn?
“I just want to know what’s going on out there,” one woman said.
And, so, it has been for decades at Valley View, as well as Mount Hope Cemetery in Belleville, sister operations ensnared by financial improprieties and neglect by multiple owners before the court-ordered receivership took over the operations. Misuse of pre-need funds forced many people to pay twice for services at the time of need — services they thought had been taken care of years before. Those families then had to wait for a court-ordered refund from the State Consumer Protection Fund.
Over two different timeframes, once between 1997 and 2002, and then again since 2013, court-appointed receivers have worked to get accounts straight. It has taken cooperation of the courts and the Illinois Office of the Comptroller — along with a diehard group of volunteers — to keep things operating at both cemeteries while new owners are sought.
Volunteers have been cleaning up Mount Hope and Valley View for years. In Valley View’s case, a nonprofit volunteer group, Friends of Valley View, was officially formed this year to give strength to fund-raising efforts.
In recent months, major cleanup has taken place at Valley View’s office building and around the well-known Bible monument. Signage is being erected and more is in the works, with assistance from the welding class at Collinsville Vocational Center. Around eight new signs are now in place, and more will be done.
Friends volunteers are now staffing the office part time.
“Since we became an official organization (in March) we have over 700 hours of documented time,” said Friends President Jeanne Carter, of Edwardsville. “One hundred hours of that was on the spring cleanup, when we had 30 people show up to help us move grave blankets and Christmas decorations and prepare the ground for mowing.”
Next up is the potential restoration of a smaller, storage facility at the front of the cemetery, which faces Illinois Route 157. Appearances are important, Carter said.
“The cemetery is a functional business. We don’t want the word out there that it’s not,” she said. Although there were graves on the site earlier, the official dedication of the cemetery was in 1924.
“We do between 40 and 60 burials a year,” said appointed receiver Sara Wooley, an attorney with the Illinois Comptroller’s Office. “We have since the receivership started.” She is handling the case involving both cemeteries.

How the problems began

Problems at the cemeteries date at least to the 1990s when neglect was becoming apparent. The owner at that time, Lawrence Esterlen, lost the cemeteries and burial fund license in 1997 for failing to maintain the properties and for taking $85,000 from the cemeteries’ trust funds, which were held for pre-arranged burials.
A court-ordered receiver, local attorney Don Sampson, assumed control from then until 2002, when Forever Illinois Corp. bought both cemeteries and put $200,000 into an escrow account to be used to make improvements and repairs at both sites. The company also agreed to restore the pre-paid burial funds and to reimburse the state for payments the comptroller made to consumers who claimed they were cheated.
A new chapter — still a sordid one — began in 2005 when Hillman Crowell of Columbia, Mo., bought the properties from Forever. Just two years later, Crowell’s company, Mid-America Growth and Development Corp., had its corporate status revoked because he didn’t file an annual report or pay his franchise tax.

The following year, 2008, a state audit found more than $300,000 was missing from more than 450 prepaid accounts at the two cemeteries.
A criminal probe was underway in 2009 when Crowell was killed in an automobile accident.
That wasn’t the end of complications for those with plots at Valley View and Mount Hope.
Crowell had claimed to have sold the properties back to Forever Illinois in 2006 — but it appeared that Mid-America Growth and Development Corp. may have never held complete legal title and the apparent owner of record was Forever Illinois Corp. The plot thickened because Forever Illinois was defunct and former officers were headed to prison in a different scandal, further complicating the title.
In 2009, the Illinois Comptroller’s Office revoked the license owned by Forever Cemeteries and appointed another receiver, Jim Carlson of Chicago. Carlson remained in place until becoming ill. He asked Wooley to take on his duties before stepping down in 2013, and the court approved.
Essentially, a receiver steps into the shoes of a business’ operator and tries to run it as a going concern, until another owner can be found.
It hasn’t been easy trying to find a buyer, Wooley said.
“The problem is that the titles are so clouded. You cannot sell it without going through a judicial process to clear the title. Then, if you can find a buyer, you can sell it with the court’s approval. At this point I’m still trying to uncloud the title,” she said. “We’re very close – that’s the good news.”
The state pays Wooley’s salary for this role and her many other responsibilities as an attorney for the state. Grounds keeping and maintenance are paid out of money from burials. There is no other money to rely on.
“It all was stolen,” Wooley said.
Today, families have to pay up front for burial — and they can be reimbursed by the state if they can prove they have previously paid in advance.
“There is a special state fund that the Comptroller’s Office administers,” Wooley said. “It’s not taxpayer money. Five dollars of every contract of any preneed sale since 1986 has gone into a special fund, called the Cemetery Consumer Protection Fund. That $5 goes toward reimbursing you if you had a preneed.” A preneed cemetery sales contract could include a marker that wasn’t placed on the grounds within 180 days, or the costs of opening or closing of graves and vaults or outer burial containers.
“We have been getting people their money back for what they had to purchase a second time,” Wooley said. “If you can wait, you’ll be reimbursed 100 percent.”
Whoever buys the cemeteries would have to make good on any existing contracts, Wooley said.
“That makes it challenging to find somebody to buy a cemetery,” she said.
Mount Hope is 120 acres — four times the size of Valley View. Mowing is performed by the city of Belleville. Mowing would cost around $90,000 per year if the receivership had to hire it out. The city stepped in when the abandoned Mount Hope did not generate enough revenues to keep the grass mowed in 2010.
By comparison, mowing costs about $30,000 a year at Valley View.

What the future holds

Wooley believes the cemetery could support burial for “thousands” more people.
A “handful” of people are still buying plots out there each year, she said. But part of what plagues Valley View is what plagues other cemetery operators — the fact that over 50 percent of America is going with cremation over traditional burial. The cemetery could adapt to that marketing wise, if it were to ever to add a scattering garden for cremains or add columbariums, which are rooms or freestanding structures with niches for ash urns.
Because of the Friends’ work to restore the cemetery, many people are showing faith in its future, Wooley said, and she believes there are several options, up to and including selling the cemeteries off individually. Wooley said interest from potential buyers has been shown but nothing is close.
“Every cemetery in this state is facing these issues,” she said. “People aren’t being buried as much anymore. What do you do to stay afloat?”
An SIUE group has been working with Valley View to provide a complete, accurate map of the cemetery, which could help in marketing of it. Students in a class called Mortuary Archaeology Field, taught by Assistant Professor Corey Ragsdale, spent time “walking every inch of the cemetery.”
The group used ground-penetrating radar as part of the effort, which aims to provide clarity and preciseness of existing maps.
The Friends’ board of directors meets once a month and anyone from the public can attend, Carter said. Membership dues are $10 a year and all donations are welcome
Anyone wanting information about the group can email friendsofvalleyviewcemetery@gmail.com
Wooley remains hopeful about both cemeteries. Speaking at the recent meeting of Valley View plot owners, she said: “As long as people keep choosing to be buried there, we’ll be OK until we find an owner. The files are very good and intact. All the books have been scanned as well.”
She added: “Things from the past we obviously can’t do anything about. It’s our intention to look forward and work toward the positive solution to this problem.”
Receiver Wooley can be reached at (217) 558-3721 or you may call Deana Dougherty at (618) 210-7816 with questions or concerns about the cemeteries.

POINT: Should Illinois legalize recreational use of cannabis?

COUNTERPOINT: Should Illinois legalize recreational use of cannabis?