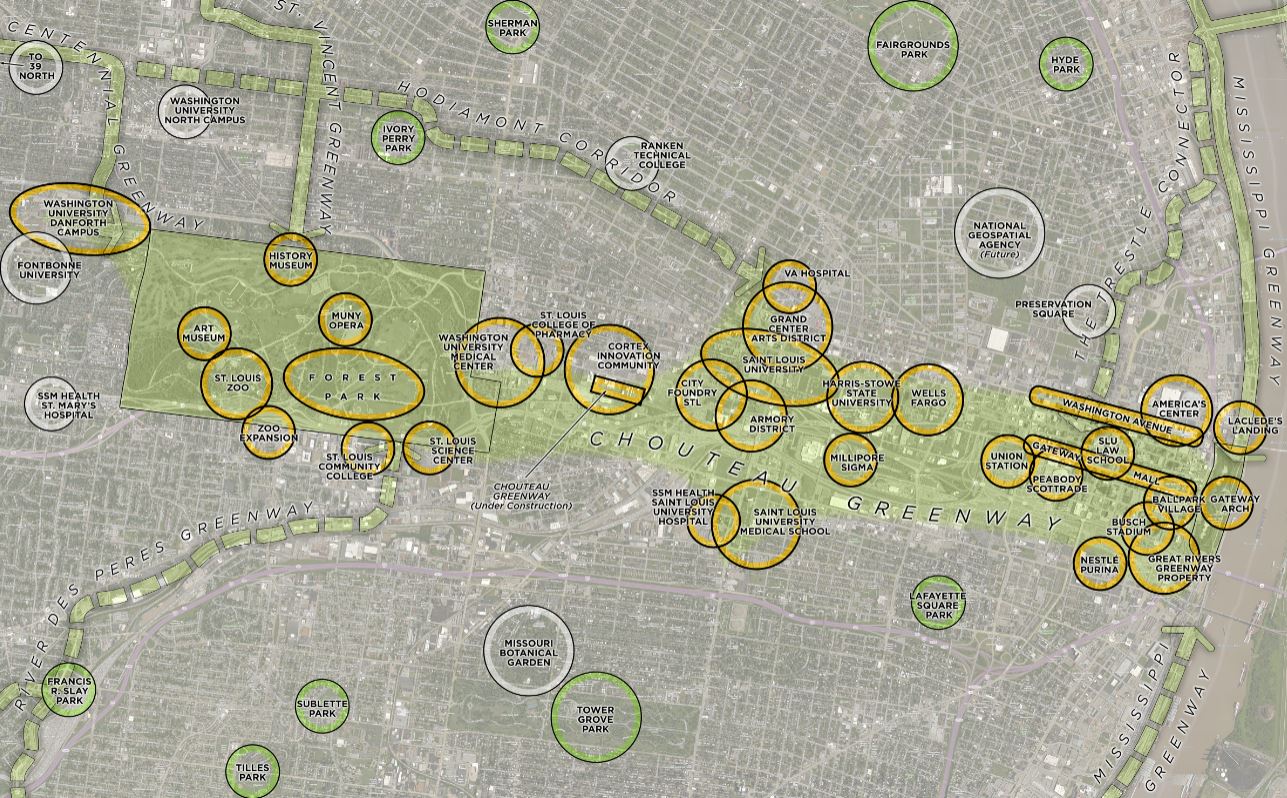 ST. LOUIS — Great Rivers Greenway has announced it is now accepting qualification submissions from interested design teams for an international design competition, a major public-private partnership to bring a long-time vision to life for the Chouteau Greenway in the core of St. Louis City.

The process, led by architect Donald J. Stastny, FAIA, who managed the design competition for the CityArchRiver project, will result in a conceptual plan that will connect Forest Park and Washington University to the Gateway Arch grounds. Interested design teams can register to download the competition manual at www.ChouteauGreenway.org and must submit their qualifications by Nov. 21 to be considered.

“The Chouteau Greenway is envisioned to be a vibrant corridor, dense with experiential opportunities, that leverages community, institutional, and private assets in creating a unique piece of urban infrastructure,” said Stastny, competition manager. “As the ‘backbone’ of the central city, it will provide junctures for connections to communities, institutions and natural resources in and around the core of St. Louis.”

Once all qualifications have been submitted by interested design teams, a jury, comprised of nine local and international experts, will utilize a series of design goals and input from the community to evaluate each design team’s submitted qualifications and recommend four teams to compete. Those four teams will be offered a stipend to work on a conceptual design, which will be reviewed by the public and presented to the jury in late April 2018. The winning team will finalize their design, completing the program, in June 2018.

The Chouteau Greenway will be part of the overall network of greenways being built by Great Rivers Greenway and partners. The competition invites designers to think beyond the trail itself to create active, vibrant spaces and destinations along the way. The goal is to have the greenway be a dynamic and unique St. Louis experience, similar to the High Line in New York City or the Atlanta Beltline.

“Imagine changing the landscape in a way that transcends traditional physical, cultural or political barriers,” said Susan Trautman, CEO of Great Rivers Greenway. “Designing Chouteau Greenway is a complex and challenging opportunity that we seek talented and innovative design teams to undertake.”

Jury members, chosen by the competition manager, who will be overseeing the design competition and reviewing the submissions include Maurice Cox, FAIA, Planning and Development director for the city of Detroit; Antionette D. Carroll, founder and CEO of Creative Reaction Lab in St. Louis; Gavin Kroeber, artist and head of the Interdisciplinary Curatorial Office for The Studio for Art & Urbanism; Deborah J. Patterson, retired VP of Global Contributions and Employee Engagement at Monsanto in St. Louis; Mark W. Johnson, FASLA, founder of Civitas in Denver; Ed Hassinger, P.E., chief engineer of the Missouri Department of Transportation; Adèle Naudé Santos, FAIA, professor of Architecture and Urban Design at Massachusetts Institute of Technology; Allison Grace Williams, FAIA, architect and urban designer at AGWms_studio; and Alternate Juror Don Roe, executive director of the city of St. Louis’ Planning and Urban Design Agency.

To gather input from the community in advance of the design phase of the competition, Great Rivers Greenway is in the process of choosing 40 community members, out of the 206 who applied, to be a part of the Community Advisory Committee to provide vision and guidance for the project. The regional public agency is also hiring local community members to serve as part of a team that will help gather input throughout the process through surveys, pop-up events and neighborhood meetings.

The first segment of the Chouteau Greenway is currently under construction as part of the TIGER grant project to build a new MetroLink station at the Cortex Innovation Community. The competition and resulting conceptual design will help partners determine a plan and schedule for designing and building additional portions of the overall greenway.

For more information about the project and to register to download the competition manual, visit www.ChouteauGreenway.org.

Great Rivers Greenway is the public agency connecting the St. Louis region with greenways, with 113 miles built so far. St. Louisans decided to leave a legacy for future generations by investing in and connecting together some of our region’s best assets – rivers, parks and communities. A vote of the people in the year 2000 created a sales tax that allows us, with lots of partner and citizen input, to build, care for and bring to life the network of greenways, creating healthy habitats and watersheds along the way. Greenways help residents and visitors explore and enjoy the region and live life outside. For more information, visit www.GreatRiversGreenway.org.