St. Louis regional ports were ranked by the U.S. Army Corps of Engineers as the most efficient inland port district in terms of tons moved per river mile during 2015, the most recent year for which final numbers are available.

Those efficiencies translated into one-third of all freight traffic along the section of the Mississippi River from Minneapolis, Minn., to the Ohio River near Cairo, Ill., being captured by the St. Louis region’s ports and river terminals. According to the USACE, the 70-mile St. Louis regional port system represents only 8 percent of this 855-mile section of the river, yet carried one-third of the 2015 freight. The numbers reinforce the St. Louis region’s critical role in the nation’s freight network and further solidifies its position as the ‘Ag Coast of America.’ 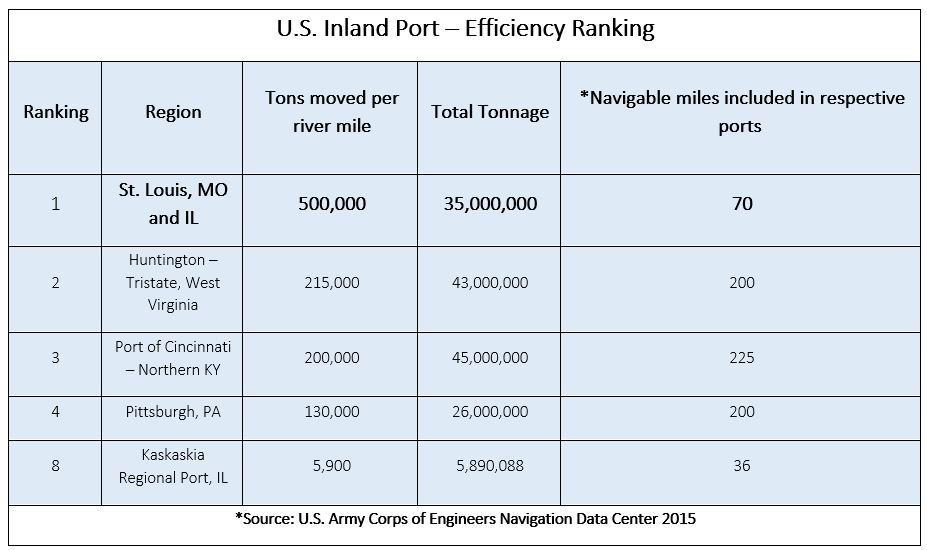 GRAPHIC: While the ports of St. Louis earned top ranking for efficiency in terms of tons moved per river mile, they also rank well when it comes to inland ports and total tonnage. The Corps ranked the region’s 70-mile port (the Port of Metropolitan St. Louis) as the third largest in the nation, and combined with the nearby Port of Kaskaskia, Ill., the Port of Metropolitan St. Louis approaches the second highest in ranking.

What does this mean? The St. Louis region’s ports and river terminals have created a highly competitive shipper and carrier market. This ability to capture more than 30 percent of the market share of 109 million total tons of all freight traffic is attributed to excess capacity at river terminals and high concentrations of barges; exceptional intermodal connectivity; and the region’s unrivaled location in the heart of America’s agricultural heartland, providing the northernmost ice-free and lock-free access on the Mississippi River to and from the Gulf of Mexico.

“It’s a combination that adds up to the St. Louis region having inexpensive barge freight rates for the handling of fertilizer, steel, manufactured goods, coal, petroleum products and agricultural commodities,” notes Mary Lamie, executive director of the St. Louis Regional Freightway, which is a freight district and comprehensive authority for freight operations and opportunities within eight counties in Illinois and Missouri that comprise the St. Louis metropolitan area.

Available capacity of the existing ports and river terminals and a high concentration of barges, combined with proposed barge facilities coming online over the next couple of years, strategically positions the St. Louis region to capture an even greater portion of the freight traffic moving along the Mississippi River.
However, U.S. Department of Agriculture reports suggest that, without improvements in U.S. infrastructure from the farm to ports, global agricultural market shares will decline dramatically.

Given the existing barge freight traffic market share handled by the St. Louis region’s ports and the opportunities for additional growth, the importance of continued efficient and reliable rail and truck interconnectivity is critical for maintaining global competitiveness.

“Investment in this infrastructure, including improving at-grade rail crossings and increasing efficiency of freight rail interconnectivity with the region’s Class I railroads, is key to supporting the barge industry,” Lamie said.

Over the past year, Terminal Railroad Association of St. Louis President Mike McCarthy led the 75 members of The Freightway’s Freight Development Committee through a process to develop and build consensus around a priority list of 20 multimodal projects that were identified as critical to modernize the region’s freight infrastructure. The list has unanimous regional approval and the backing of both the Missouri and Illinois congressional delegations, which has vaulted regional priorities into national priorities.

The St. Louis Regional Freightway is a freight district and comprehensive authority for freight operations and opportunities within eight counties in Illinois and Missouri that comprise the St. Louis metropolitan area. The St. Louis Regional Freightway connects public sector and private industry stakeholders to establish the bi-state region as a premier multimodal freight hub and distribution center in the nation through marketing, public advocacy, and freight and infrastructure development. The Freightway is one of five enterprises operated by Bi-State Development, which submitted the information for this story.