Southern Illinois University Edwardsville Chancellor Randy Pembrook talked over campus plans, discussed challenges and stood firm against racism during his second annual State of the University Address to the campus community on Thursday. 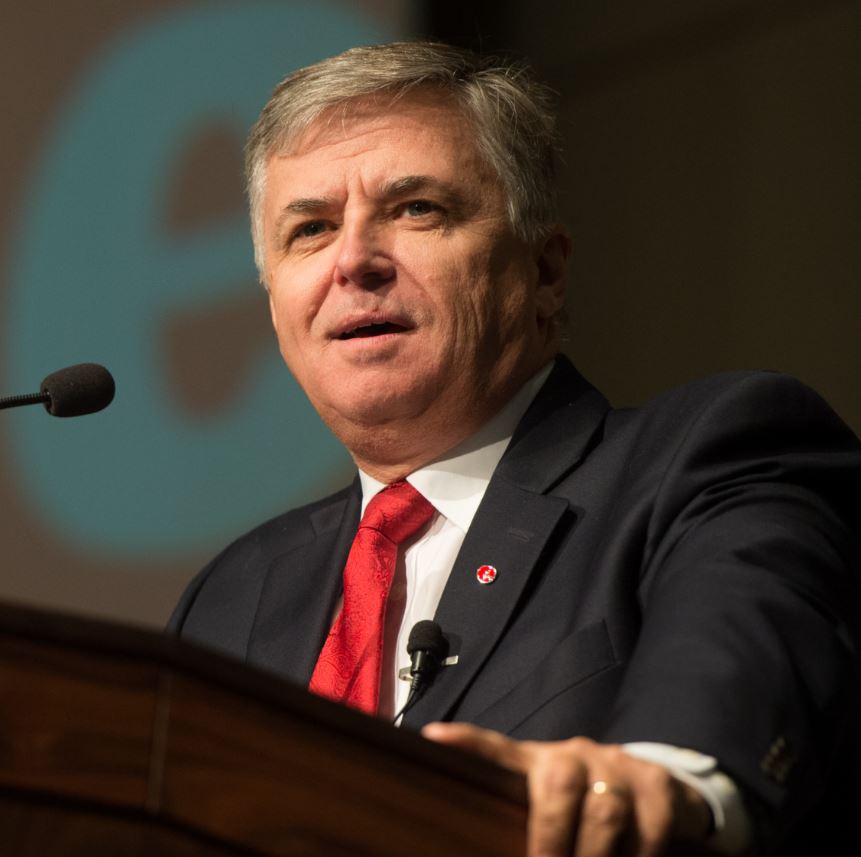 In an address using the theme of “Big Questions,” Pembrook highlighted the university’s successes and, in light of two racially motivated incidents on campus last week, emphasized SIUE’s strong stance against hate crimes.

“We’re in a higher education setting, and that means that there will be challenges that we need to navigate,” Pembrook said. “In reaction to the challenges that have taken place this week, we are tackling such issues head-on through the creation of a response team, training of counselors and advisors to offer support, establishing a 24/7 hotline where students can get immediate help, and the creation of a new sustained dialogue initiative.”

Even as he made his comments, a crowd of people marched through the library, the student center, and the administration building., quietly protesting two acts of racism that occurred recently. In one, racial slurs were left on a student’s door. In another, a Confederate flag was painted on the rock in the campus quad. Student groups partnered in the peaceful protest, which some said was not timed to coincidence with the campus talk.

Pembrook urged the campus community to unite in its efforts to maintain a safe, secure and inclusive campus environment for all. He went on to celebrate the successes of the 2016-17 academic year, including numerous faculty and staff honors, student achievements, enrollment accomplishments in the midst of the state’s budget stalemate, and academic advancements, including the development of multiple new academic programs and specializations.

His primary focus was on the planning and preparation taking place to accommodate the changes and challenges that this academic year will bring.

“Additionally, we have funds set aside for a faculty development center. This space will give faculty new ways to find information and build skills, and will underscore the role of the library as the heart of our campus. We also plan to take a new approach to strategic planning, and consider program prioritization and schedule optimization.”

The chancellor emphasized a few major areas of focus for the academic year, including aggressively working to attract more clients to University Park, growing in the area of international recruitment and boosting community engagement. He noted that $1 million has been set aside for the gathering of innovative ideas from the campus community.

“I hope you will start thinking about ways we can make SIUE different,” he said. “I want to know how we can accomplish the things that are near and dear to your heart, and we have set aside funding to make that possible.”

One of the big questions Pembrook asked was “What is the essence of SIUE?”

“A truth I have figured out about students over the years is that during recruitment sessions and programs, we talk about tuition rates, accreditation, how many majors we have and more. We give prospective students all of this data, and then they walk out and just get this feeling that, ‘yes, this feels like the place I want to be.’ So, rather than it being data-based, it’s more of a phenomenological thing. Decisions are often based on a feeling that “this is the place for me.”

He concluded with an analogy to an announcement a pilot had made on a recent flight regarding making it through turbulence ahead.

“This academic year, we took on major head winds,” he said. “We had to try new things and go different directions to get where we wanted to be. But we got there, and I thank the entire campus community for that.”