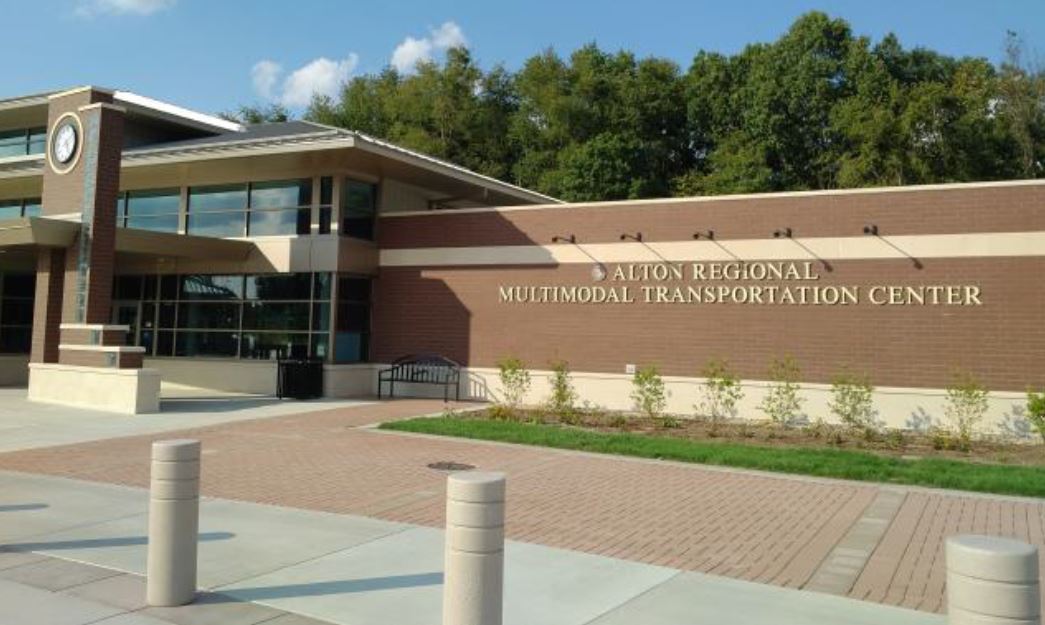 ALTON – The Illinois Department of Transportation was joined today by the city of Alton and Amtrak to announce the completion of the new Regional Multimodal Transportation Center.

“This beautiful new transportation center is one more step in a statewide effort to enhance the passenger rail experience along the Chicago-St. Louis corridor,” Illinois Transportation Secretary Randy Blankenhorn said. “Travelers in Alton will enjoy a reliable, convenient options to get to where they want to go, while the region benefits from a new station that will help to create economic opportunity for years to come.”

The new 8,000-square-foot facility will not only serve passengers on Amtrak’s Lincoln and Texas Eagle trains, but provide an important connection to the eight bus bays for the new Madison County Transit transfer hub. Combining the train station and transit hub in the same facility increases a passenger’s ability to make bus and train connections. Other features include free Wi-Fi, 227 parking spaces, 12 bike lockers, six bike racks and accommodations for customers with disabilities. Located at 1 Golf Road, approximately 1.5 miles northwest of the old station, the new station follows the successful openings of new stations to the north in Dwight and Pontiac.

“The City of Alton is pleased to celebrate the opening of the Alton Regional Multimodal Transportation Center,” Alton Mayor Brant Walker said. “This landmark facility will expand regional transit options and provide opportunities for transit-oriented development adjacent to the new station. We are extremely thankful to our project partners, the Federal Railroad Administration, the Illinois Department of Transportation, Madison County Transit and Amtrak for their tireless efforts to make this project a reality.”

The total cost of the facility was $14.4 million. Construction costs for the train station and platform were funded by a federal grant administered by IDOT to introduce increased safety, reliability and passenger comfort, as well as a decrease in travel time, between Chicago and St. Louis. New stations will open soon in Lincoln, Carlinville and Joliet, with upgrades to existing stations in Normal and Springfield.

The city of Alton received a separate federal grant to cover the cost to construct the remainder of the site, the Madison County Transit transfer hub and connections to a local trail network for bicyclists and pedestrians.

“We are confident this development will be like the major stations we opened with IDOT in Champaign in 1999 and in Normal in 2012: it will spark area redevelopment while providing a vital transportation link,” said Mike Franke, Amtrak’s senior director of State Government Contracts. “This project shows what happens when a great city teams up with a great state transportation department and progressive providers such as Madison County Transit and Amtrak.”