By DENNIS GRUBAUGH
With keys in hand following mammoth construction of the new HSHS St. Elizabeth’s Hospital in O’Fallon, officials are now making a home of the $300 million project, which officially debuts Nov. 4.
From the outside it looks complete, but inside, many final touches remain before move-in. 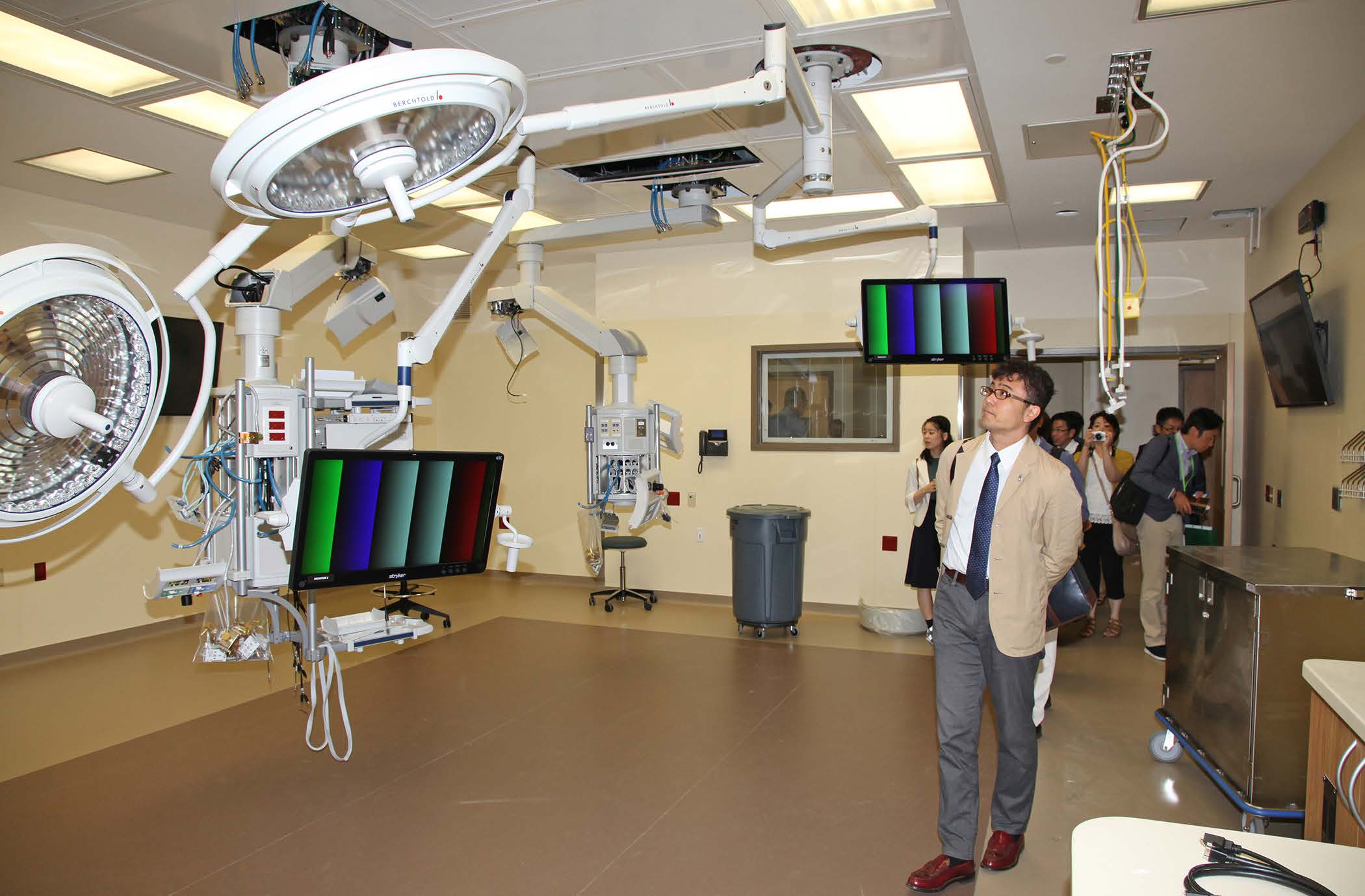 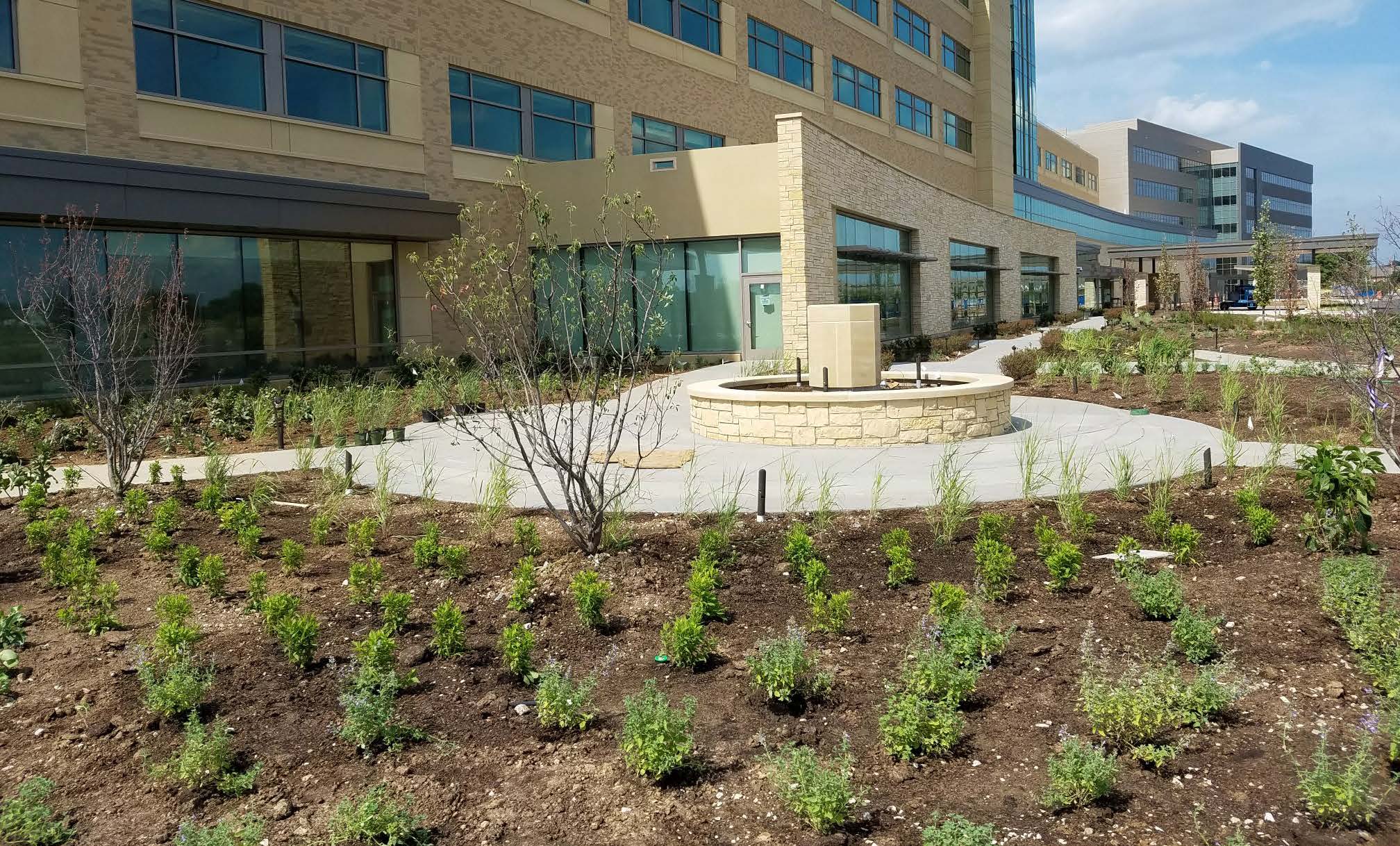 More than 1,500 staff, doctors and other vendors are getting oriented to the building while the contractors proceed on a punch list. Only limited construction will take place over the next several weeks. The keys were presented to the hospital Aug. 10.
Viewed from Interstate 64, the facility has a long, low profile that belies the tall, five-story structure viewed up close. It is located just off Green Mount Road. The outside signage was put up late in the month, with the word “hospital” covered over so passersby don’t mistake it for a functioning hospital.
Facing the front and from the left, the overall complex features a hospital building; then two centralized towers; then a medical building called the O’Fallon Health Center. Each of the floors are connected throughout the length of the complex so doctors and staff never need to use an elevator to get from one end to the other. The first-floor hallway of the hospital is dubbed Main Street and will be home to many services visitors, colleagues and outpatients (not inpatients) would need.
President and Chief Executive Officer Peg Sebastian and Director of Construction Management Sue Holloway took the Illinois Business Journal on a tour. Each is proud of her role in shaping the hospital’s future.
Recruitment of staff, particularly doctors, has been “very good for us. The best it’s been in years,” Sebastian said. “Everyone wants to work with new technology.”
Holloway has spent the better part of two years as the hospital’s director manager of construction, which was done by Alberici-Holland Joint Venture. Alberici is based in St. Louis and Holland Construction Services is based in Swansea.
There are only three public entrances into the hospital as opposed to the 16 at the current facility in the 200 block of South Third Street in Belleville. The current hospital will be closed and no longer used for hospital services after the new building goes live. Other buildings on the Belleville campus will, however, house some related medical services and several support staff departments. Services remaining in Belleville include: Walk-in Clinic, Primary Care Clinic, Outpatient Laboratory, Imaging (including 3D Mammography), Physical Therapy, physician offices, and coffee shop with grab and go sandwiches.

Access to the new complex will come by way of the Emergency Room, the main lobby or the Outpatient Services entrance. The attached medical office building has a separate entrance. From the lobby, visitors can head west toward the hospital or east toward the medical office building.
Many artistic pieces, from statuary to stained glass, are being transferred to the new facility. Much emphasis has been placed on such things as windows, vegetation, fireplaces and other comfortable surroundings.
There will be three road entrances into the facility, two off Regency Park and one from North Green Mount Road.
All of the construction is considered the first phase, taking up 53 acres of 120 acres total. The hospital has room to expand if it’s ever needed, Sebastian said.
Kahler Slater out of Wisconsin was the architect, and many of the features are based on the input of staff and the public, Sebastian said. For example, the ambulance garage, on the west end of the complex, was designed with help from a committee of local emergency management services. The resulting space allows ambulances to pull in and pull out the same direction. The patient offload is out of the elements and so discreet that few outside the emergency room will see the patients.
A short distance from the ambulance garage is a helicopter pad.
Emergency patients will be immediately tended to in a triage area and not have to go very far for further treatment.
There are three trauma rooms, and each one can take care of two patients at a time. Two of the trauma rooms are designed so they can be used together, allowing treatment of four patients at once, with one physician giving orders.
“We know, being on I-64 here, we are going to be receiving more multi-vehicular trauma, and possibly mass casualty trauma,” said Holloway, whose training is as a critical care and cardiac nurse. “We put these two rooms together so we have the ability to take care of two patients at the same time. Data has shown if you separate a mother and a child in acute trauma situations, they don’t do as well. Our thought is to keep them together.”
Trauma equipment is contained on an overhead boom that can be manipulated to allow more maneuvering space on a floor freed from cables and wires.
The hospital won’t be doing inpatient pediatrics, but has collaborated with SSM  Health Cardinal Glennon to provide full-time pediatricians 24 hours a day, seven days of week to staff the ER and Nursery for pediatrics. The partnership is already in place at the current hospital.
Unique to the new hospital, at least in Metro East, will be St. Elizabeth’s Clinical Decision Unit, a 24-hour, 10-room observation unit right off the Emergency Department that allows the hospital to watch patients who might not meet routine admission protocol.
Holloway gave the example of a young person with chest pains who might not be a cardiac risk but might be in need of observation. Knowing they might not have to be admitted can calm patients and aid in their recovery. In the future expansion plan, these 10 rooms could be converted and used to serve inpatients
Next on the tour, Holloway pointed out the off-stage elevators, which are designed so that patients and visitors to the hospital don’t end up on the same elevator.
“These will be the elevators for colleagues, patients and supplies,” she said.
Visitors will only use elevators at the main lobby entrance.
Everything in the layout is based around ease of use for both patients and staff. For instance, the ICU will be on the same floor (the second) as surgery, again keeping patients from having to travel in an elevator.
Almost everything is designed with comfort, Sebastian said, because it aids in recovery.
A 22-foot stained glass containing the image of St. Elizabeth will adorn the outpatient entrance as part of a two-story foyer that the outpatients come through.
“If you’re not an emergency patient, you’ll come through this door,” Holloway said. “Everybody will register at this desk. And all services they would use are close together. If you’re coming in for an EKG or a lab draw or to (preregister) for surgery, you’ll come in right here.”
“Eighty percent of health care these days is outpatient,” Sebastian explained. “So, we had to reconfigure what is a hospital.”
The replacement hospital is about 350,000 square feet on 120 acres of land, compared to the almost 1 million square feet of the current facility that sits on 17 acres in Belleville. The replacement hospital will have 144 private patient beds, which is fewer than St. Elizabeth’s has now.
Fewer beds are needed because more patients are receiving outpatient care and private rooms help decrease the spread of infections. Also, the outpatient center at the new hospital will be sized to accommodate the predicted growth in outpatient care in the future.
Much of the new building is glass, and that is for a reason.
“The more the patient can see through the building and see inside, it decreases their anxiety of what’s on the other side of the door,” Sebastian said
Baylor University in Texas has done extensive studies about the use of nature and the use of light in hospitals for calming diversions, the CEO said.
A public open house is slated for Saturday and Sunday, Oct. 7 and 8. Other invitation-only events are planned as well.

Here is the office building layout:

Here are the hospital’s operations by floor: