GRANITE CITY — One 15-mile section of the Mississippi River in the St. Louis region delivers the highest level of grain barge handling capacity anywhere along the Mighty Mississippi — so much so that it is now being called the “Agriculture or Ag Coast” of the nation in terms of barge transfer facilities for agricultural products.
To sustain and grow the market share, infrastructure investment in multimodal interconnectivity is critical, local officials say.
As production and demand for commodities like corn and soybeans increases, the St. Louis region is said to be strategically positioned to handle a significant portion of the expected increase in freight volume along the mostly inland waterway.
Those findings were revealed in August during a panel discussion at America’s Central Port in Granite City, with David Jump, president of Cahokia-based American Milling, and Jeff Keirn from the Illinois Department of Transportation. The meeting, hosted by Bi-State Development, St. Louis Regional Freightway and America’s Central Port, provided a positive outlook on the bi-state region’s role as a national and global freight hub.
Jump said the amount of river business in the St. Louis region has disproportionately increased over the past three decades. There is an increased demand for the transfer of grain across the industry, but the bi-state region’s barge transfer facilities are earning recognition as a more cost-effective and efficient means to transfer products by barge for shipment to the Port of New Orleans as compared to other areas north of St. Louis.
That recognition comes on the heels of investment of more than $200 million in the region’s agricultural product barge transfer infrastructure facilities since 2005, he said.
“The St. Louis region is a rail and interstate highway gateway,” said Jump. “It is more cost-effective to move commodities into, out of and through St. Louis by combinations of truck, rail and barge than points upstream on the Mississippi and Illinois Rivers. The freight cost to ship large cargoes through places like Davenport (Iowa) or Peoria (Illinois) to and from New Orleans has increased significantly, while the freight cost to ship through St. Louis to New Orleans has not increased at all, and is in fact, netted down for this year.”
The reason it is more cost-effective for companies to transfer freight through the St. Louis region is due to the more efficient infrastructure and handling capacity offered via the region’s open waterways and barge transfer facilities.
According to Jump, there has been consolidation in the river transportation industry over the last decade, and barge lines are becoming more streamlined by focusing on efficiency. Railroads have offered cheaper rates to large barge-loading facilities that can turn unit trains — carrying 110 to 125 railcars of grain and agricultural product — in just a few hours.
“Barge loading and unloading capacity has expanded in the St. Louis area to take advantage of these train rates and barge freight rate adjustments,” Jump said. “The four highest capacity grain barge loading facilities in the entire inland waterway are in Cahokia. Three of the four were built in the past five years. As a result of increased handling capacity and favorable barge freight values, the St. Louis region has become a very significant destination for these trains.”
The four agricultural product transfer facilities in Cahokia are operated by Consolidated Grain and Barge Company; Louis Dreyfus; and China National Cereals, Oils and Foodstuffs Corporation (COFCO International) — China’s state-owned grain and food processing manufacturer and trader. Jump noted that China has become a large buyer of soybeans, with 35 percent of soybeans grown in the United States being exported to China. COFCO never owned a grain/agriculture barge transfer facility in the interior of the United States until last year when it invested in the St. Louis region. Jump said China will begin buying grain coming into Cahokia this fall.
The frequency of unit trains along Illinois Route 3 has increased since 2016 and is expected to increase again this fall. In 2016, fluctuations resulted in as many as two unit trains crossing Route 3 a day, with each unit crossing Route 3 twice a day. In early 2017, the fluctuation reached four unit trains per day. In the fall, CGB will complete unit train rail improvements, which will increase the amount of unit trains that cross Illinois Route 3 to potentially six. According to Jump, COFCO has the capability for two additional unit trains, with the potential to accommodate a four-unit train per day capacity. In addition, Jump said American Milling is planning for an additional barge transfer facility, which would increase the St. Louis region’s capacity to handle even more grain and grain products in the future.
The growth in capacity comes as the demand for exports continue to increase. Jump told the Freightway port working group members that U.S. soybean exports have increased from 20 million tons to 57 million tons over the past 30 years, and corn exports increased from 32 million tons to 57 million tons.
The St. Louis region is seeing a direct economic impact as a result of this increase and its capacity to handle additional amounts of grain and agricultural products.
“In 1985, more than 5 percent of grain barges arriving in the New Orleans harbors were coming from the St. Louis region, and now that number has increased to about 30 percent,” Jump said. “The factors that are forcing growth in the St. Louis region are not going away. There is nothing on the river like the St. Louis region.” 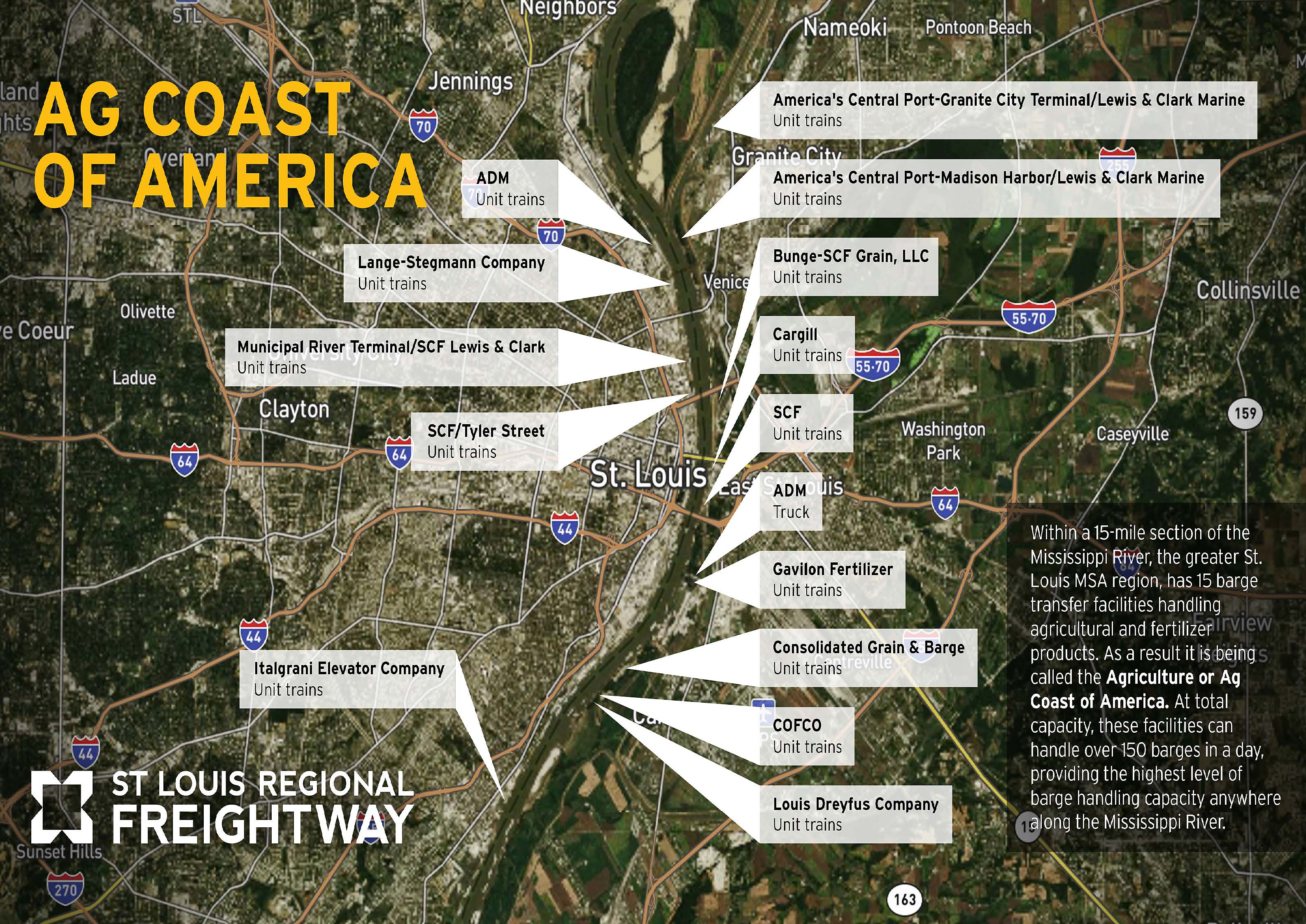