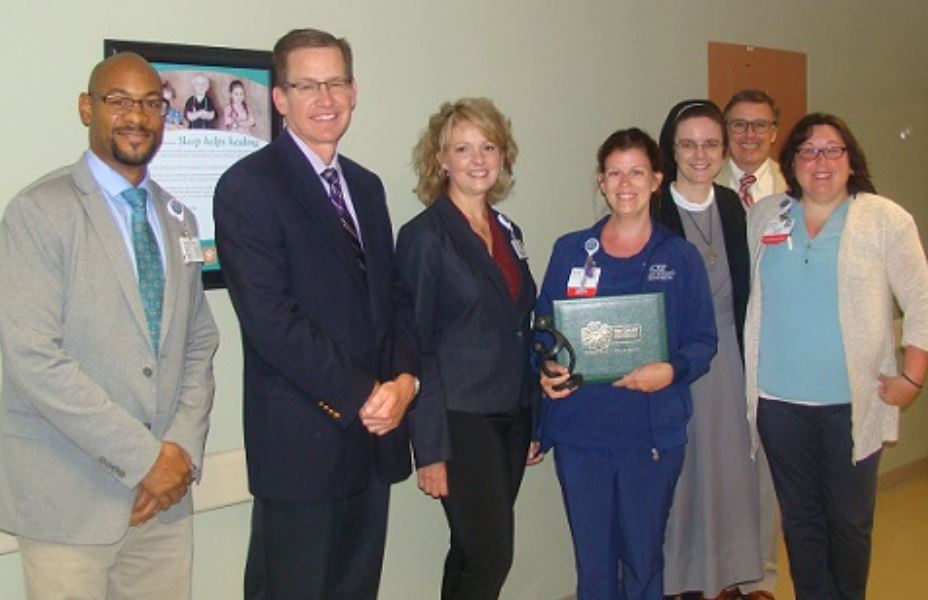 A registered nurse who works in the Health Center’s Intensive Care Unit, she was nominated by a patient’s family member. She was one of 19 nominations received this quarter. “We truly appreciate the compassionate, merciful care that RNs and LPNs provide every day and the Daisy Award is one way to recognize these dedicated individuals,” said Sister M. Anselma, chief operating officer for OSF Saint Anthony’s.

Ferguson has been with OSF Saint Anthony’s since 2016. She was recognized for demonstrating safe and compassionate care by the spouse of a man recently in the hospital:

“April always answered our questions and explained (my husband’s) condition to us. After about 13 days in the hospital his heart began to weaken so he was scheduled to have a pacemaker put in. He was suffering from weakness and sleep apnea and would just stop breathing. The day of surgery, April stayed by his bedside for almost 3 hours making sure he didn’t stop breathing. My husband would not be alive today had it not been for all the great care he received from your doctors and nurses during his 28-day stay in the hospital.”

The DAISY Award program can be found in over 2,000 health-care facilities in all 50 states and 14 other countries. An acronym for Diseases Attacking the Immune System, The DAISY Foundation was formed in November 1999, by the family of J. Patrick Barnes who died at age 33 of complications of Idiopathic Thrombocytopenic Purpura.

For additional information about the DAISY Foundation visit www.daisyfoundation.org.