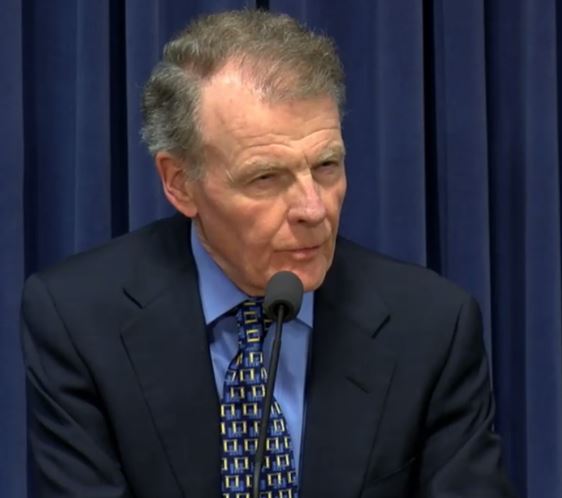 “We went through a lot of issues,” Durkin said, “down to the minutia. And to me, that is positive. It shows that there is a willingness to bring this to a negotiated settlement.”
Durkin wouldn’t divulge the details being negotiated. However, he said Republicans are unified in opposing an override of the governor’s changes to SB1, including removing hundreds of millions of dollars in additional funding that Rauner and other Republicans say is a bailout of CPS’ pension system by suburban and downstate taxpayers.

The House was scheduled to be in session Wednesday, but late Tuesday Madigan’s office said session was canceled because of the ongoing negotiations.

“In light of the progress made today by the four leaders, I am canceling session previously scheduled for Wednesday, Aug. 23,” Madigan said in a statement, though threateningly adding, “If we don’t reach compromise later this week, the House will move to override the Governor’s veto of SB 1 in session next week.”

State Rep. Peter Breen, R-Lombard, said the Democrats’ plan to bailout CPS pensions isn’t reasonable.
“The Democrat education funding plan,” Breen said, “is the greatest theft of taxpayer resources since the deliberate underfunding of our state’s pension plan. There is nothing reasonable about it.”
Breen said the Democrats’ plan would be a multi-decade, multi-billion dollar problem if passed as is.
The governor’s changes would remove the extra funding for Chicago and instead spread that throughout the rest of the state’s school districts.

The Senate overrode the governor’s amendatory veto earlier this month.

Madigan last week said the House has until Aug. 29 to act on an override. If that doesn’t work, then they can take up another bill the Senate passed earlier this month with the same language as the Democrats’ original attempt.