Less than two hours into a recent Tuesday, a Simmons Hanly Conroy employee looked out a second-floor window of the firm’s Alton office building to see a man had collapsed in front of the building. Without hesitation, nurses Amy Fair, SHC director of medical relations, and Guy Spangler, SHC Medical Department supervisor, rushed down the stairs while other employees grabbed a nearby defibrillator and called 911. The man, a longtime vendor who worked with the firm, was unconscious and without a pulse when employees arrived at his side. 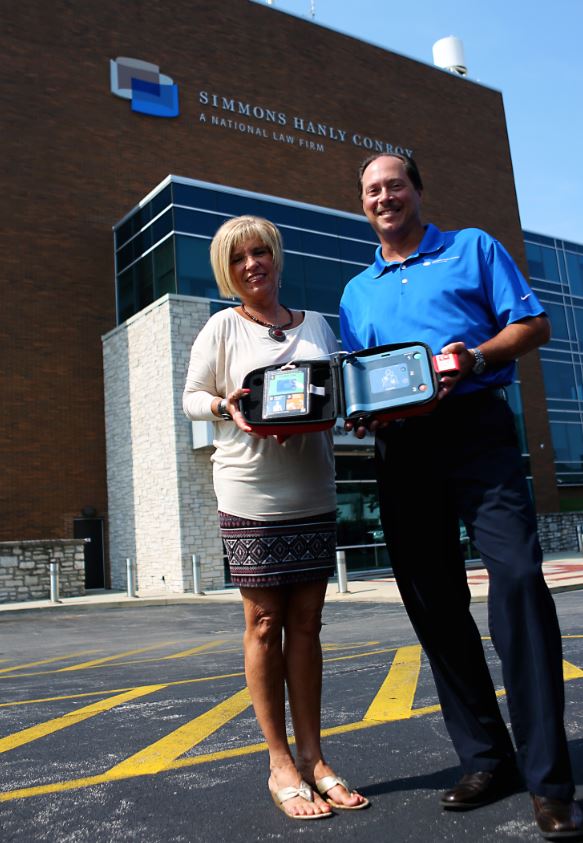 “When we got there, it was obvious he was in full cardiac arrest,” Fair said. “There wasn’t time to think about anything. We just did what we were trained to do.”

After several rounds of chest compressions, Fair used the defibrillator to shock the man’s heart one time – and that’s all it took. Paramedics arrived in less than five minutes, and by that time, the man was awake and talking. Spangler, who has a background in EMS and hospital emergency room work, said it is uncommon to see people wake up after similar episodes.

“When a person is in that kind of state, every second counts,” Spangler said. “The fact that someone knew exactly where the defibrillator was and could get it to us so quickly was probably the difference between life and death. You don’t see too many people come back after something like that. We were so glad that he did.”

Fair agreed, adding, “That first big breath he took after he woke up – that was everything.

“The employees who didn’t have any kind of medical training weren’t shaking or hesitating,” Fair explained. “They acted quickly and deliberately, doing exactly what needed to be done. That teamwork made all the difference.”

SHC has a defibrillator located on every floor of its office building, and employees are trained to know where the devices are located and what to do in case they are needed. Employees have used the defibrillators several times and have saved several lives in the process.

“I’m thankful that our leadership made defibrillators a priority in our building,” Fair said. “You never know what kind of health problems people may have and when you might need to use one to save a life.”

The wife of the man who suffered cardiac arrest contacted SHC the next morning after the incident to report that her husband was resting at the hospital.

“I am so grateful to everyone at the Simmons firm,” the man’s wife said. “Had it not been for the quick actions of the employees and the use of the AED paddles, he may not have made it through the situation. Thank you from the bottom of my heart.”

SHC employees were happy they could help.