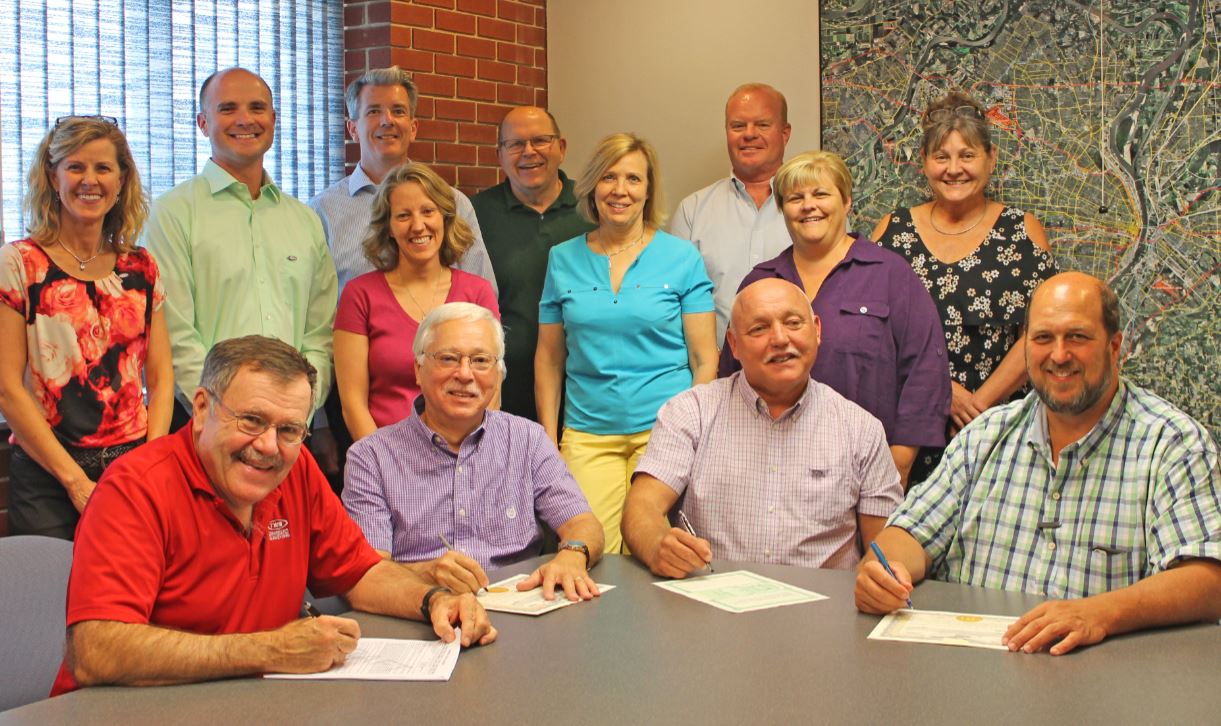 An executive transition has begun at Thouvenot, Wade & Moerchen Inc. with the announced implementation of a 100 percent Employee Stock Ownership Plan.

TWM is one of the largest engineering and surveying firms in the Southwestern Illinois/St. Louis region.

As part of the change, President Rollie Thouvenot, PE, has announced he will retire at the end of 2017. Thouvenot has served as president since 1987. Chief Operating Officer Robert DeConcini, PE, will then assume the role of president.

In 2003, the fim initiated the ESOP structure, with the ESOP buying more shares with each passing year. Effective July 17, the 14 individual shareholders who owned the remaining 61 percent of the company sold their shares to the ESOP. The sale allowed TWM to become 100 percent ESOP-owned.

TWM has been employee-owned for more than 70 years. It serves clients both locally and nationally with five locations in the greater St. Louis region, including Swansea, Waterloo and Edwardsville in Illinois and St. Louis and St. Charles in Missouri.

An ESOP is an employee benefit plan that holds company stock in each employee’s name. In TWM’s established plan, employees do not make financial contributions in order to participate in the ESOP. Instead, they build equity in the plan based on length of service.

“One of my proudest moments from the past 30 years was transitioning TWM into an ESOP,” said Thouvenot. “It creates an ownership culture and allows our employees to share in the growth and prosperity of the company.”

The company has also appointed two outside individuals, Tom Holloway of Edwardsville and Mike Riley of Belleville, to its board of dDirectors. Holloway retired from his role as president and CEO at TheBANK of Edwardsville in 2015. He currently serves on the board at McKendree University, SIUE Foundation, University Park at SIUE and Memorial Hospital East. Riley is the founder and president of Professional Therapy Services, Inc. He is president of the Illinois Physical Therapy Association and has served as chair of the Leadership Council Southwestern Illinois.

To coincide with all these changes, TWM is also rolling out an updated logo to match the evolution and energy of this growing company.

“We wanted to stay close to our roots with this new logo, as the TWM emblem has become a recognized symbol throughout the region,” said DeConcini. “However, these small changes will help us modernize the look a bit and give our identity a little more distinction to reflect the new company ownership. Even with this slight change in the appearance of our company logo, unchanged will be the commitment of all our employees to our mission of “Exceptional Service. Nothing Less.”

What started as a three-man operation back in 1946, TWM now employs approximately 90 people and provides civil, structural and railway engineering, land surveying, and a full array of geospatial services.

PHOTO: The selling shareholders of TWM gathered for a photo as the company became 100 percent ESOP owned. All of the shareholders are also current employees at TWM.