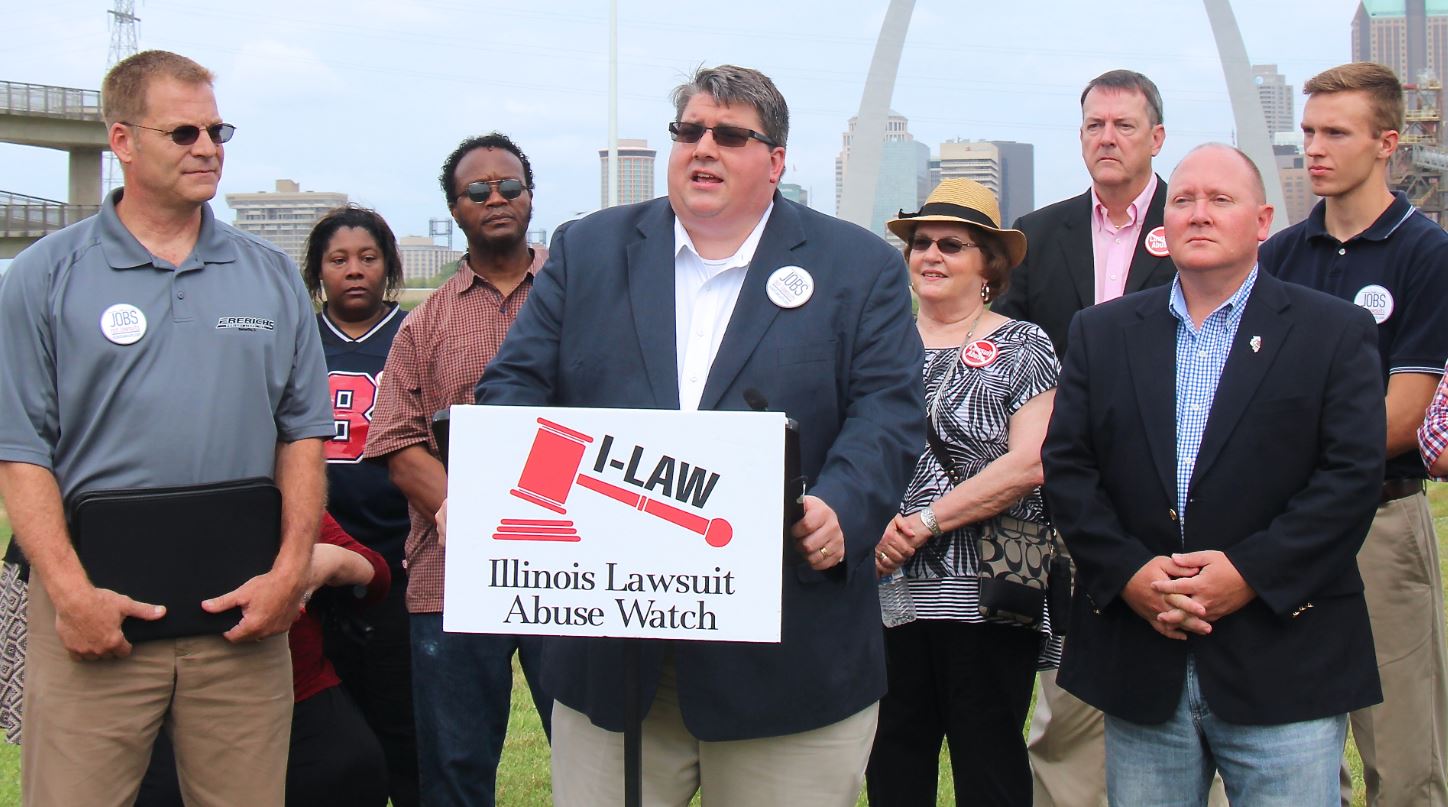 At the same time, the supporters of Illinois Lawsuit Abuse Watch praised Missouri for progress made this year in that state.

Fed up with the Illinois General Assembly once again failing to respond to what they said is Metro East’s status as a haven for aggressive personal injury lawyers and the job-killing frivolous lawsuits they bring, local supporters of I-LAW held a rally today with local leaders and small-business owners at an East St. Louis riverfront park to build support for bringing fairness to the judicial system.

House Speaker Michael Madigan and Senate President John Cullerton both failed to allow votes to be taken on what the group called “common sense lawsuit reforms” that had been introduced early in the session. By contrast, said I-LAW Executive Director Travis Akin, the legislatures in neighboring states Missouri and Iowa both passed lawsuit reforms this year that were expressly designed to make their states less friendly to personal injury lawyers and more friendly to job creators.

“It is a tale of two states,” said Akin. “Missouri – the ‘Show Me State’ – has responded to a growing lawsuit abuse epidemic there by moving swiftly this year to enact meaningful lawsuit reforms that will stop personal injury lawyers from filing junk lawsuits against employers. The ‘Show Me State’ is showing the way.”

For years, I-LAW has advocated legal reforms and been critical of those who take advantage of the system.

“Illinois – the ‘Sue Me State’ – continues to allow powerful personal injury lawyers to game the system to their personal advantage while their backers in the Illinois General Assembly continue to block common sense lawsuit reforms that will help keep businesses from fleeing the Metro East. The ‘Sue Me State’ is saying, ‘Sue away!’ This failure to restore fairness to Metro East courts will undoubtedly now send jobs away, and that is not something our state can afford,” Akin said.

Personal injury lawyers have long challenged the reputation as unfair, saying they are seeking justice for those who are injured.

“For far too long, Madison and St. Clair counties have been a magnet for personal injury lawyers and plaintiffs from all over the country who clog our courts with junk lawsuits that have nothing to do with the Metro East, all in the hopes of striking it rich playing our region’s plaintiff-friendly lawsuit lottery. Too many Metro East judges have allowed greedy personal injury lawyers to game the system to their advantage, and that is hurting job creation efforts in the Metro East.”

Illinois State Sen. Jil Tracy and State Rep. Tom Bennett proposed lawsuit reform legislation this year that includes a proposal that will stop personal injury lawyers from shopping around for the friendliest court jurisdiction, even if the lawsuit has nothing to do with that jurisdiction. This practice, often called “venue shopping,” is all too common in Madison and St. Clair Counties, according to the “Judicial Hellholes” report.

Akin explained, “It’s just common sense to require lawsuits filed in Illinois to have an actual connection to Illinois, and yet in Madison County, 99 percent of the asbestos lawsuits filed there are for plaintiffs who do not live in that county. That is an absurd misuse of our courts and our tax dollars, and it victimizes all of us.”

According to the most recent “Lawsuit Climate Survey” conducted by Harris Poll, Illinois ranks near the bottom of the nation in terms of its lawsuit environment – 48th worst of the 50 states. More than 75 percent of the business leaders surveyed by Harris Poll for this report said lawsuit climate is a “significant factor” in determining where to expand and grow.

“The reality is companies look to move to states where the legal climate is fair, which is why the Metro-East’s status as the “Lawsuit Abuse Capital of the U.S. is making it extremely difficult to attract new employers,” says Mike Walters, Madison County Board member, who did not attend Thursday’s event but submitted a statement. “Even worse, the Metro East is actually losing jobs, as companies have moved across our borders to states like Missouri that have recently passed common sense lawsuit reforms to make it less likely that businesses there will be frivolously sued.”

“The cost of fighting a frivolous lawsuit could put a small business out of business,” said Bill Frerichs, owner of Frerichs Freight Lines in Belleville, who did appear Thursday. “I know firsthand as a business owner that the threat of a lawsuit is ever present here in the Metro East. Now, with Missouri making their lawsuit system fairer, we should not be surprised to see employers leaving the Metro-East to set up shop in a state where they won’t have a lawsuit target on their back.”

Akin said: “The ‘Show Me State’ is showing the way to reform – and rolling out the red carpet to businesses in Illinois that are tired of having a lawsuit target on their back. It is time for Illinois to stop being the “Sue Me” state and time to rally for reforms in the Metro-East judicial system.”

I-LAW can be found on the web at www.ILLawsuitAbuseWatch.org

PHOTO: Travis Akin, center, addresses the media Thursday on the East St. Louis riverfront. More than a dozen supporters were in attendance.