GODFREY – For the first time, Lewis and Clark Community College’s nominee for the Illinois Community College Trustees Association Outstanding Faculty Member Award has been announced as the overall winner.

Coordinator of LCCC’s Architectural Technology and Drafting and Design programs, Luke Jumper, of Alton, was selected from among 29 nominees submitted by community colleges throughout Illinois. 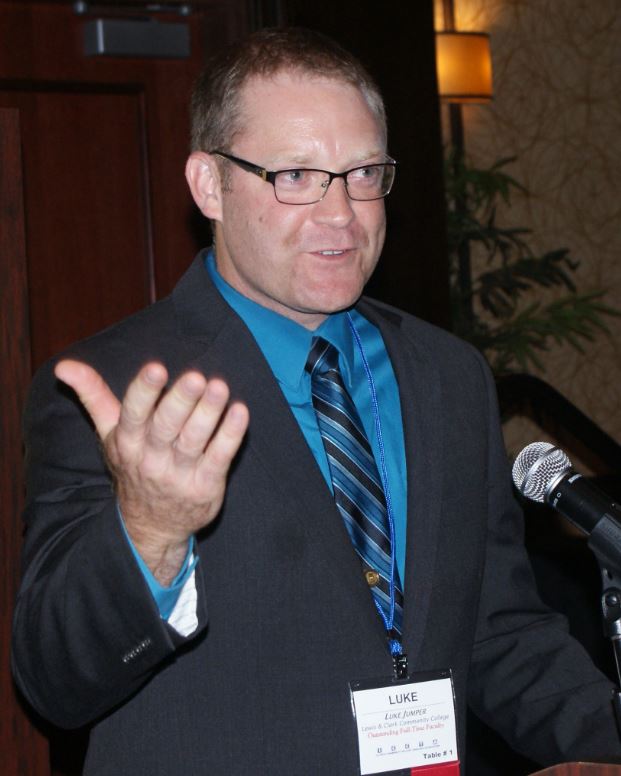 “Great teaching comes from the heart, and Luke Jumper embodies all the attributes of great teachers,” said ICCTA Executive Director Michael Monaghan. “His devotion to teaching and learning is evident in all he does for his students and Lewis and Clark Community College.”

Jumper joined Lewis and Clark as an adjunct faculty member in 2007 and became a full-time instructor in 2011. He teaches courses in architecture, drafting and design, industrial technology, solar design and smart grid technology, and is a member of the college’s Green Oversight Committee.

“Luke Jumper is passionate and determined in his efforts to secure opportunities for Lewis and Clark students, whether those students are his architectural or drafting students, or students whose learning is advantaged by applications such as the opportunities to design and build their own products in the Confluence Fab Lab,” said LCCC Vice President of Academic Affairs Linda Chapman.

Jumper holds a Master of Architecture degree from Washington University in St. Louis, Missouri, and a Bachelor of Science in Architectural Studies from the University of Illinois Urbana-Champaign. He is a registered architect in the state of Missouri and a Leadership in Energy and Environmental Design Accredited Professional in Building Designs and Construction.

“I am honored to be the 2017 ICCTA Outstanding Full-time faculty member,” Jumper said. “Lewis and Clark has been very supportive of letting faculty members like me be proactive in using new technology in the classroom that excites students. I hope that this award signifies the commitment our college has to preparing students for the jobs of tomorrow.”

Jumper is a past recipient of the American Institute of Architecture St. Louis Design Award for the Enid Waste Water Treatment Plant Design and received a 2015 Epsilon Pi Tau Alvin Rudisill Scholarship.

He was instrumental in developing and launching the St. Louis Confluence Fab Lab at L&C’s N.O. Nelson Campus in Edwardsville and earned L&C the role of host for the United States Fab Lab Network Symposium, held in March.

“Assistant Professor Luke Jumper not only excels in the classroom; his vision also includes the economic impact of Lewis and Clark on the entire district,” said LCCC President Dale Chapman. “It is Luke’s energy and creativity that led to Lewis and Clark initiating the St. Louis Confluence Fab Lab, which now serves hundreds of people throughout our region with the most advanced technology.”

PHOTO: The ICCTA chose LCCC’s Luke Jumper from 29 nominees across the state for its 2017 Outstanding Faculty Member Award. The award was announced at an ICCTA ceremony June 2 in Bloomington-Normal. Photo courtesy of ICCTA