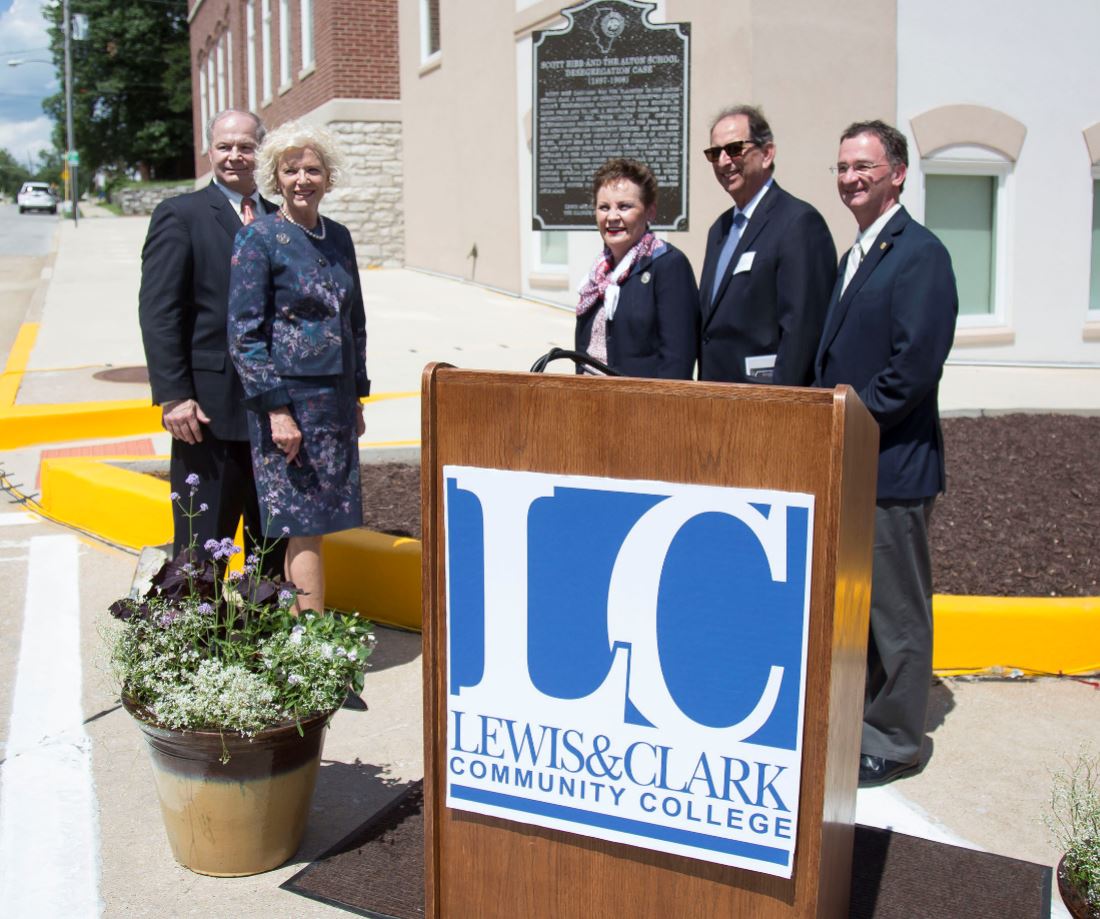 GODFREY – Lewis and Clark Community College unveiled and dedicated the very first historical marker honoring the work of an African American in the City of Alton, Monday, June 19.

The college welcomed a crowd of faculty, staff, students, honored guests and members of the community to celebrate the dedication of the marker, which honors Scott Bibb, who fought for the desegregation of Alton schools from 1897-1908 in what became known as the Alton School Case.

A 40-minute ceremony included an unveiling of the plaque, followed by a reception and self-guided tours of the Scott Bibb Center, which houses LCCC adult education programming such as GED Completion, Family Literacy, Highway Construction and Building Futures Youthbuild.

“In going through this building, I can only imagine what Scott Bibb and others who were involved in the Alton School Case would say about this wonderful building and the kinds of programs that are a part of it,” said SIUE Professor Emerita, SIU System Trustee and historian Shirley Motley Portwood.

Bibb (1855-1909) was the plaintiff in the Alton School Case, a series of lawsuits that sought to retain Alton’s desegregated schools, which had existed from 1872-1897, a short-lived outcome of the Reconstruction Era. When Alton city officials re-established segregated schools in the fall of 1897, the African-American community resisted en masse. Bibb brought suit in The People of the State of Illinois, ex-rel., Scott Bibb vs. The Mayor and Common Council of the City of Alton.

Over the next 11 years, the lawsuit was appealed to the Illinois Supreme Court five times. In 1908, the court ruled in Bibb’s favor, but Alton failed to implement the orders of the court, denying African-American students access to white schools. It would take another 50 years before the educational system in Alton would be desegregated once again. 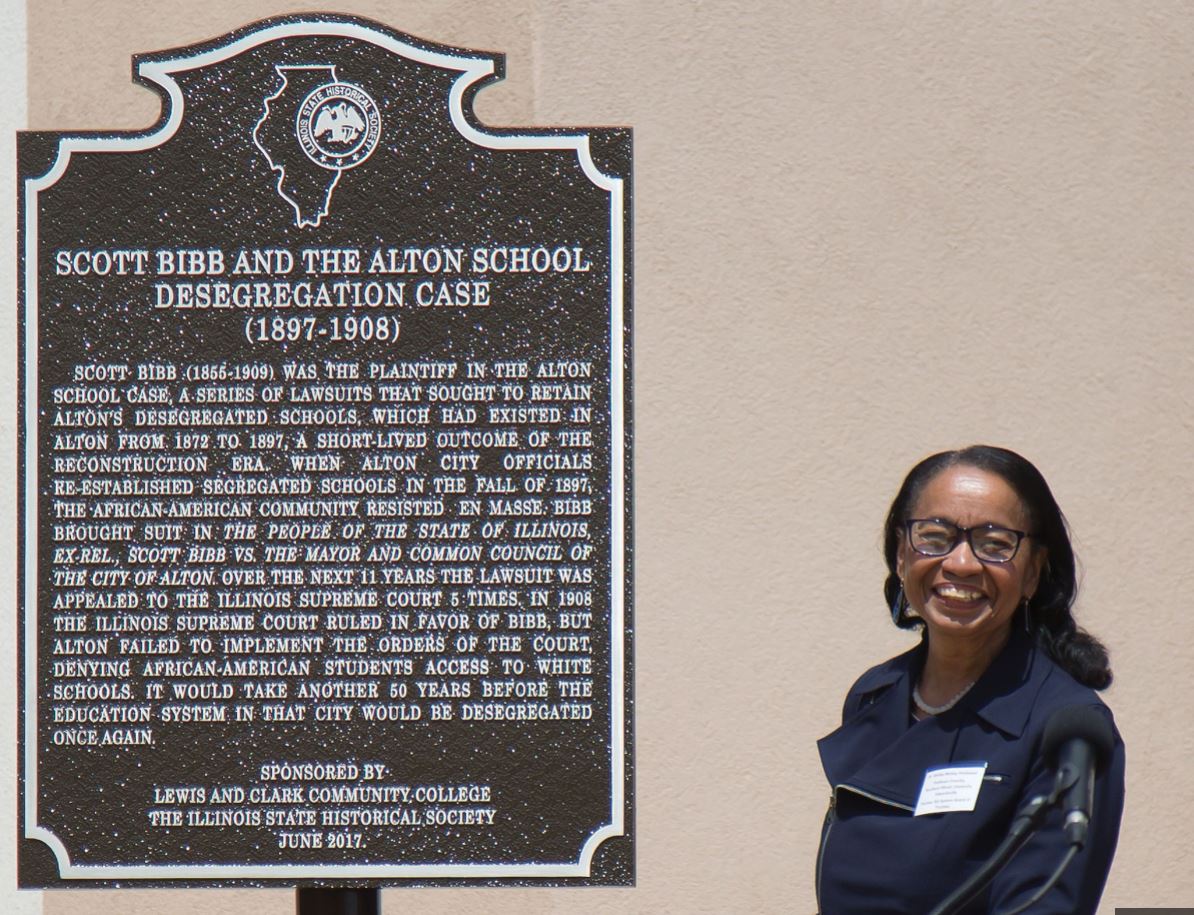 “What should have been a resounding victory for Scott Bibb, his children, and the entire black community was instead turned into another painful chapter in the struggle for African American rights,” Portwood said. “We honor Scott Bibb and the myriad of Scott Bibbs who fought courageously for the rights guaranteed to them and their children by the U.S. Constitution and various state and federal statutes. Today, we see before us both a permanent marker and an educational institution acknowledging Scott Bibb, and attesting to his importance as a historical figure.”

Lewis and Clark became involved in the history of the Alton School Case in 2015, when the college hosted a “History on Trial: Alton School Case” event, sponsored by the Illinois Supreme Court Historic Preservation Commission.

“The Alton School Case initiated discussions among historians, lawyers, Illinois Supreme Court justices, educators and community activists. Although many were aware of the 11-year slice of history, many more of us were not,” said L&C Vice President of Academic Affairs Linda Chapman.

It was during the History on Trial event that the college announced that it would rename its Alton Community Learning Center, located at the former St. Patrick’s School, in Bibb’s honor.

“Naming this building the Scott Bibb Center was the first step in memorializing the history and the heroism of Scott Bibb and the black community, who from 1897 to 1908 tried to correct an injustice by gaining public access to public schools for their children,” Chapman said. “This marker is the culmination of our efforts to honor Scott Bibb’s leadership and the efforts and sacrifices made by the Alton African American community.”

Members of the Illinois Supreme Court attended the event, where Justice Rita Garman spoke of the case’s importance to Illinois courts.

“The sit-ins, boycotts and other protests against school segregation that Scott Bibb and his supporters engaged in were a foreshadowing of the civil rights movement that would eventually emerge in the 20th century,” Justice Garman said. “The actions taken here by Scott Bibb and others contributed to the movement that eventually led the U.S. Supreme Court’s decision in Brown v. the Board of Education in 1954. Thus, it is fitting Alton is now the home of the Scott Bibb Center, of Lewis and Clark, and of this historic marker. Scott Bibb may have never held public office, but he was a true leader. He made history, and this community and our state are the better for it.”

“We had a wonderful turnout for the commemoration of this historical marker, which serves such a great purpose,” said LCCC President Dale Chapman. “We’re honored to be able to bring awareness to the community regarding this little known piece of Alton history.”