The Shiloh resident’s Mr. Appliance of Mid-America franchise serves residential customers from Edwardsville south to Waterloo and east to Lebanon. Grubofski’s franchise is the only one in the Metro East and will s 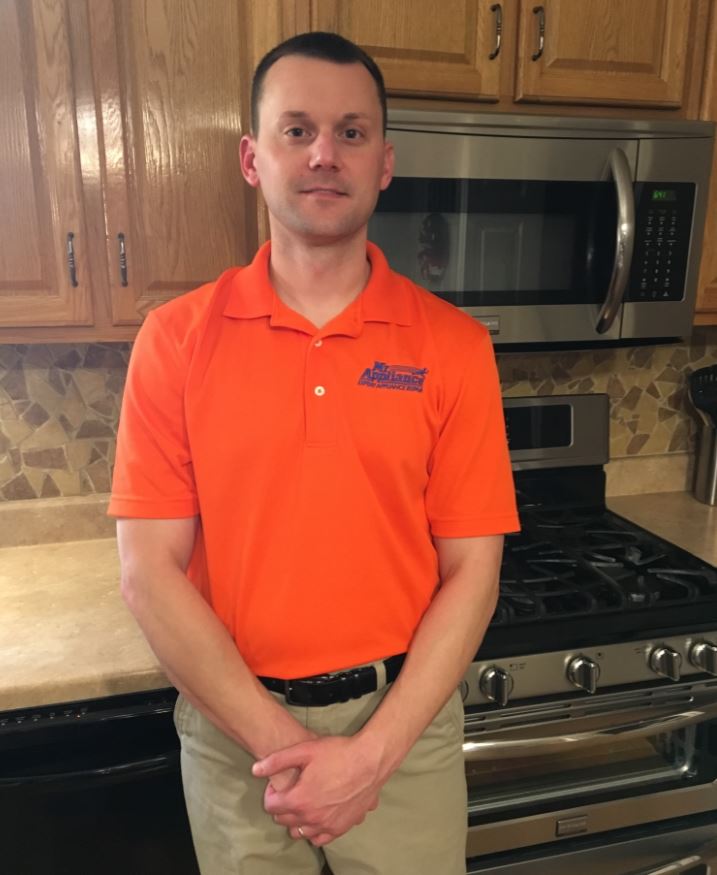 erve a population radius of more than 140,000 households.

“I’ve been in the Air Force for 15 years now,” he said. “Ever since I can remember, I’ve been searching for the ideal franchise opportunity. On average in the Metro East, there’s a two-week waiting period to get a household appliance serviced. I know in my household that the appliances are the hub … if one goes down, it needs to be repaired within a day or two.”

Dishwashers, stovetops, ovens, refrigerators, washers, dryers and other appliances are among Mr. Appliance’s fortes when it comes to repair.
Such is the business plan of Mr. Appliance of Mid-America. Grubofski’s competitive edge will be same-day or next-day service, paired with a one-year guarantee on all parts and service. “Our objective is to truly engage with customers and not just be an in-and-out repair company,” he said.

As home appliances continue to become more sophisticated and in need of computerized diagnostics, it’s more difficult for homeowners to make their own repairs. “Like automobiles, appliances have more complex technology built into them than in the past,” Grubofski said.

The Illinois Metro East SBDC began assisting Grubofski in February. SBDC Interim Director and small-business specialist Jo Ann DiMaggio May met privately with Grubofski, assisting him in fine-tuning his business plan so he could seek funding. The SBDC also connected Grubofski with an attorney specializing in business start-ups.

“I attended the SBDC’s ‘Boots2Business’ session,” he said. “There was no cost to me, and I learned a lot about exactly what I needed to do to own and run a business. From that point on, Jo Ann and the SBDC have been working with me on a confidential basis, helping me complete the due diligence necessary to successfully begin my business. I’m grateful to Jo Ann and to the Small Business Development Center for guiding me on the path to success.”

Thanks to the SBDC’s expertise, the new franchise owner said he was able to secure a sizable commercial loan from PNC Bank. Di Maggio May is currently working with Grubofski on developing an employee handbook.

Di Maggio May said working with Grubofski has been gratifying, because he is a hard worker who has a clear vision of what he wants his franchise to be and how he plans to serve Metro East homeowners.

“Chad is not afraid to dig in and explore a problem or situation,” Di Maggio May said. “He is dedicated to providing the ultimate customer service, and I cannot wait to see how far he goes with Mr. Appliance of Mid America. I look forward to assisting Chad along the way as he grows the franchise.”

Customers will be able to contact Mr. Appliance of Mid-America online to set up their appointments via the franchise’s website, mrappliance.com. Customers are also welcome to call the company at (618) 213-3030 to request a repair day and time. Customer service representatives are available 24/7.

The Illinois SBDC at SIUE assists new businesses such as Mr. Appliance of Mid-America and existing businesses headquartered in the nine-county Metro East region of Calhoun, Jersey, Madison, Bond, Clinton, St. Clair, Washington, Monroe and Randolph. It is a no-cost service to the community supported by the U.S. Small Business Administration, Illinois Department of Commerce and Economic Opportunity, and Southern Illinois University Edwardsville.