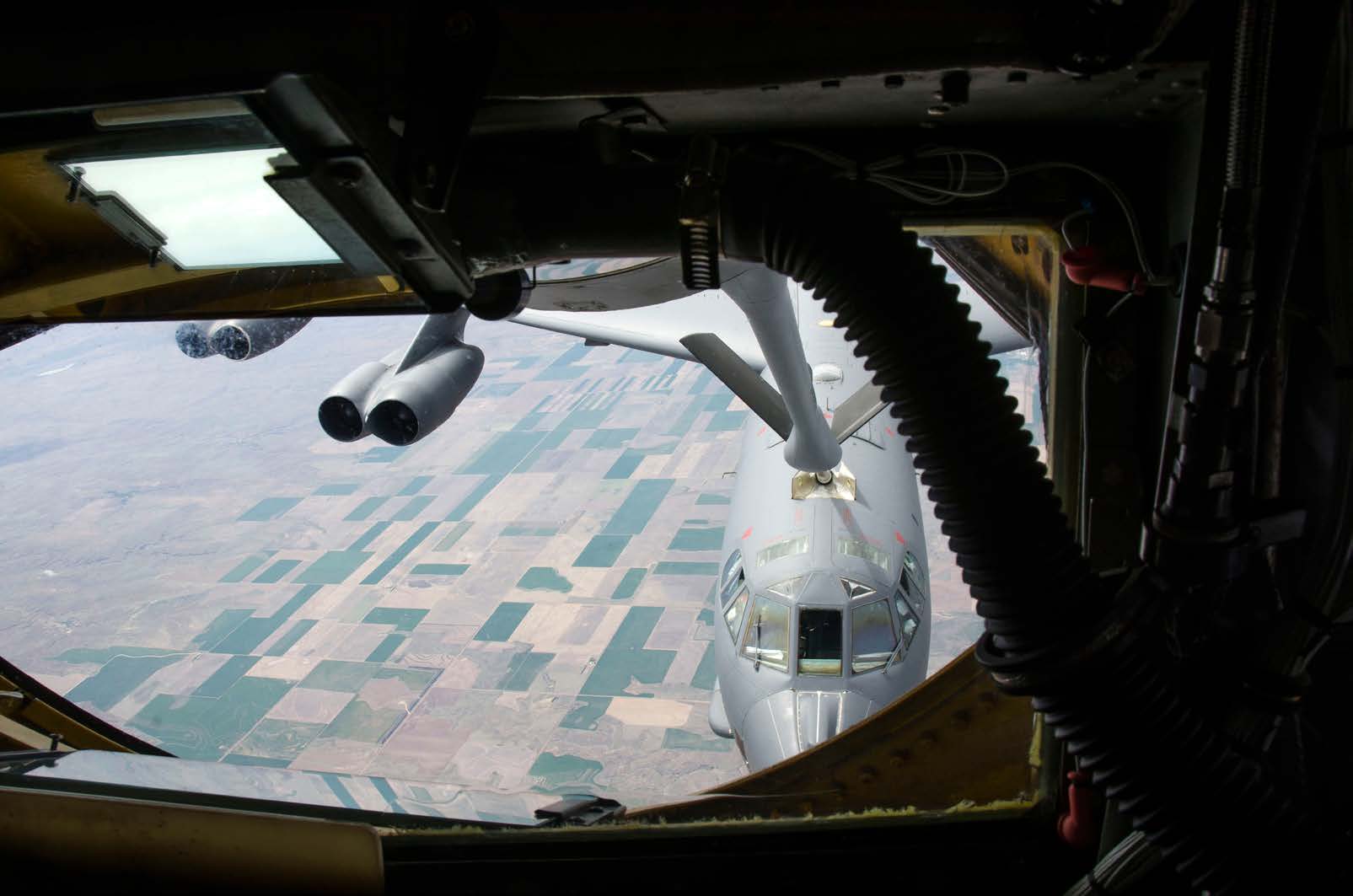 By DENNIS GRUBAUGH
SCOTT AFB — At the region’s biggest employer, they are some of the biggest birds flying, yet their importance can be measured in about 16 feet.
That’s the tiny crucible of maneuvering distance between the mammoth KC-135 Stratotanker and the trailing aircraft it serves on refueling missions.
In baseball parlance, that’s about a quarter of the distance from home plate to the pitcher’s mound at Busch Stadium.
The refueling missions are only part of the responsibility of the 126th Air Refueling Wing, which is a unit of the Illinois Air National Guard. The wing has more than 900 personnel (about 500 drill status Guardsmen; 250 full time; and more than 100 active duty members). Several of the members work in support of other commands and operations on and off base.
Very few of the personnel actually live at Scott AFB, but a good number live in the surrounding community.
“Our recruiting base is better here than it is in Chicago,” said Col. Tom Jackson, commander of the Operations Group overseeing the wing. “The folks in the community are pretty impressive. About 95 percent of our wing lives within 50 to 75 miles,” Jackson said.
The heritage of the 126th can be traced to the 108th Observation Squadron, which was formed in 1927 and is celebrating its 90th year in July.
The KC-135 will be on display along with many other craft during the 100th anniversary Air Show and Open House at Scott AFB on June 10 and 11.
There are nine KC aircraft in the fleet assigned to Scott, but they are almost never at the base at the same time. Some are deployed around the world, some are on in-state assignment, some are in maintenance. The circumstances change with a phone call.
About 1,000 people are involved with the wing’s mission, either directly as part of the wing are through affiliation with other base operations.
“We touch everything here at Scott,” Jackson said.
The wing’s mission is to defend the nation, protect the state and serve the community — in that order. Pilots fly all over the world in nuclear support roles for the United States Strategic Command; perform inter-theater and intra-theater air refueling, including in combat zones; and provide military support to civil authorities and in state emergencies.  The missions can involve airlift, transport, reconnaissance and more.
“Nuclear support is our No. 1 mission. It’s what we train for every day,” Jackson said.

Air Mobility Command is the parent command for the 126th.
“That’s our active duty command; it’s who we provide support for, all over the globe. We’ve got folks spread from Guam to Qatar and every place in between,” he said.
After World War II, the 126th transferred in 1951 to Midway Field in Chicago. Three years later, it relocated to O’Hare Field in Chicago. In 1961, it received its air refueling mission with the KC-97 tanker.
The wing got its first KC-135 Stratotanker in 1976, and by 1999 the wing and its fleet were relocated to Scott AFB.
The Boeing-made Stratotanker is the military version of the commercial 707 jet, operated by four turbofans mounted underwing. It’s 136 feet, 3 inches long and 41 feet, 8 inches high. It can travel up to 530 mph and has a wingspan of 130 feet, 10 inches.
A cargo deck above the refueling system can hold both passengers and cargo. Depending on configuration, it can carry up to 83,000 pounds of cargo.
Back to baseball analogy: That’s the equivalent of 415, good-size fans at Busch.
Sturdy as they are, the planes don’t always stand up to Mother Nature. On a recent day, with several members of the media boarded and ready for a demonstration flight over Tennessee and Virginia to witness refueling of an AWACS (a Boeing airborne early warning and control surveillance plane), the pilot shut down the takeoff because of windy conditions. The training display was rescheduled for a few days later.
The crew can be as few as three — a pilot, co-pilot and a boom operator — and they offer a friendly debate as to who is most valuable during one of their close-ups.
“We have a joke that the pilot just drives the boom operator to work. He gets to do his thing and that’s our mission,” said longtime pilot, Col. Jeff Jacobson, an Edwardsville resident and a full-time Guardsman. Jacobson has nearly 6,500 flight hours with the Air Force.
His co-pilot that day was a full-time pilot for Southwest Airlines who serves part-time with the guard. His boom operator that day was Sgt. Rich Bradford, who is a part-time Guardsman, and going to school.
There is no debate on the significance of what they do as a team.
“Without air refueling, nothing happens in the military. There are no airplanes that fly in this Air Force that do not need a tanker,” Jackson said.
The plane conducts refueling between 20,000 and 28,000 feet on average, but it can go as low as 4,000 feet in critical support situations.
Here’s how the fueling process works:
The plane arrives at a designated refueling track and is assigned a “control point,” meaning a specific space, time and altitude where the plane must make the rendezvous.
A boom operator, using hand controls, is stationed in the lower rear of the plane and controls the boom, which is an arm-like device fitted with another extension containing the fuel hose, essentially a hard tube. The operator can watch the process unfold through a window that’s just large enough for a good view. Two people at a time can watch while lying on their stomachs.
The receiving plane approaches from below and is in constant communication during the process, which takes only a few minutes. The gas is generally taken in through a port on top or to the front of the receiving plane, depending on the craft.
The KC-135, which was produced from 1956 to 1965, can pump up to 6,000 pounds of fuel a minute (7 pounds per gallon). The plane can hold up to 33,000 gallons and burn or off load every bit of it.
“We pump more gas in two minutes than a gas station can pump all day,” Jackson said.
Keeping things stable isn’t always easy. Wind, turbulence, night-time visibility, icing, even St. Elmo’s Fire — a glowing batch of electrically charged plasma — contribute to the difficulty of keeping things steady. There is only a few feet of maneuverability — left, right, up, down — during the process.
A pilot must have a minimum of 1,000 hours of tanker flight time to become a flight commander.
While grounded, the 126th reports directly to The Adjutant General, the commander of the Illinois Air National Guard. When mobilized, the wing reports directly to Air Mobility Command and its operational component, the 18th Air Force.