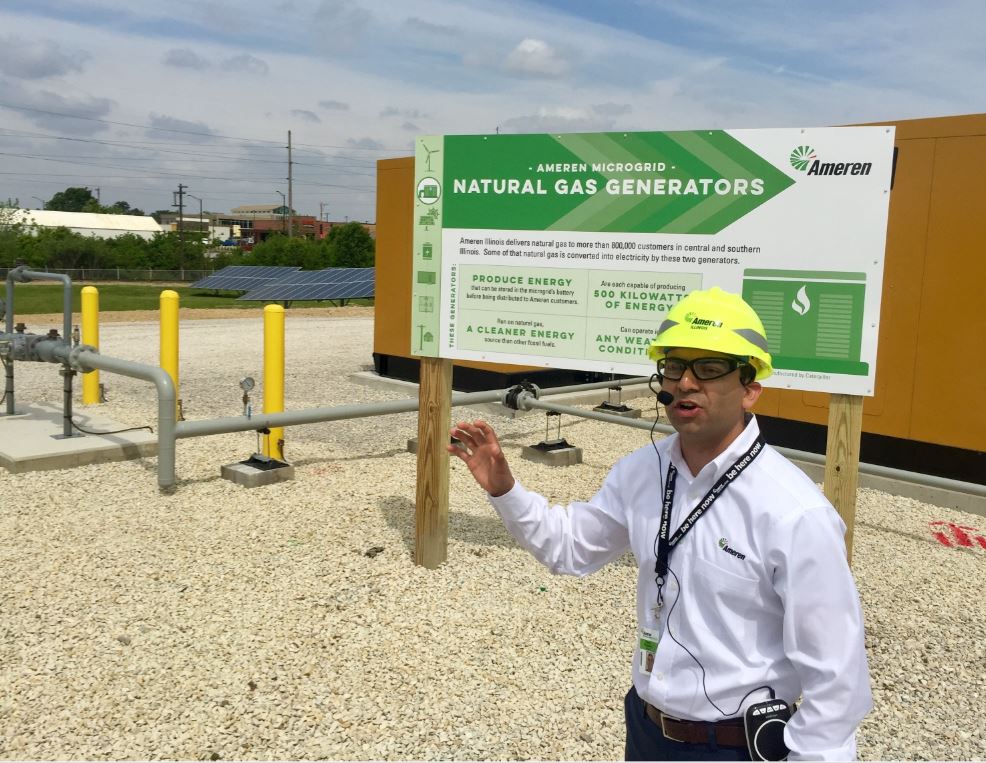 CHAMPAIGN — Ameren Corp. has completed what it calls one of the most technologically advanced utility-scale microgrids in North America.

The $5 million facility, located at Ameren’s Technology Applications Center adjacent to the University of Illinois campus in Champaign, is one of the only utility-scale microgrids in the nation capable of serving live loads on an actual utility distribution feeder.

As larger companies and high energy users seek to become more energy independent, Ameren built the microgrid facility to test monitoring and control methods for aggregating clean, renewable energy sources – wind, solar, and natural gas – with advanced automation and battery storage. The Ameren microgrid is one of the few in the world that operate at utility-scale voltages, between 4-kilovolts and 34.5-kilovolts, with multiple levels of control. It is the only known microgrid in the nation capable of seamlessly transitioning the power source for an entire distribution circuit from exclusively distributed generation sources to the traditional grid. This concept, known as “islanding,” enables Ameren to deliver more than 1-megawatts to customers without experiencing an outage.

“Integrating microgrids onto our system can provide cleaner energy and a stronger, smarter grid capable of delivering the products and services to fit the needs of our future customers and the communities we serve,” said Warner Baxter, chairman, president and CEO of Ameren Corp. “There is no better time than now to innovate and position Ameren for even better results in the years ahead.”

The Ameren microgrid can produce up to 1,475 kilowatts, enough to power more than 190 homes. The leased generation assets located on site include:

“Our focus on building a next generation energy delivery system has enabled Illinois to emerge as a national leader in smart grid innovation,” said Richard J. Mark, chairman and president of Ameren Illinois. “As the technologies we are testing at this microgrid facility become more accessible in the future, our customers will be able to count on Ameren Illinois to help them safely install and cost-effectively operate distributed generation resources.”

The microgrid is a key element of Ameren’s investment in developing a smarter energy infrastructure. Along with the microgrid advancements, Ameren Illinois has added new equipment and technology to reduce outages and improve overall reliability. This summer, Ameren Illinois will begin installing 83,000 smart meters at customer locations in Champaign County. These advanced, two-way devices will provide Ameren Illinois customers with energy use data and easy access to programs to reduce energy and save money.

Construction on the Ameren microgrid was completed in December 2016, followed by testing in the first quarter of 2017.