GODFREY – This June, Lewis and Clark Community College will celebrate the dedication of a state historical marker honoring Scott Bibb, who fought for the desegregation of Alton schools from 1897-1908.

“This is one of the most significant historical markers we have been asked to co-sponsor in the society’s 118-year history,” said William Furry, executive director of the Illinois State Historical Society in Springfield. “Scott Bibb’s story needs to be told and told again to remind us that justice is never easily won.”

Bibb (1855-1909) was the plaintiff in the Alton School Cases, a series of lawsuits that sought to retain Alton’s desegregated schools, which had existed from 1872-1897, a short-lived outcome of the Reconstruction Era. When Alton city officials re-established segregated schools in the fall of 1897, the African-American community resisted en masse.

“The Bibb case shows the strength of the Alton African American community which, like many others throughout the post-Reconstruction era, resisted attempts to re-establish separate and unequal facilities for blacks,” said Dr. Shirley Portwood, a professor emeritus of SIUE and current SIU Board of Trustees member who has done extensive research in Illinois African-American history.

Bibb brought suit in The People of the State of Illinois, ex-rel., Scott Bibb vs. The Mayor and Common Council of the City of Alton.

It would take another 50 years before the educational system in Alton would be desegregated once again.

“When the Chapmans requested permission from me and the City Historical Commission to install an historical marker honoring Scott Bibb, we were impressed by the documentation and the sincerity of their commitment to this project,” said Alton Mayor Brant Walker. “We were glad to add our support.” 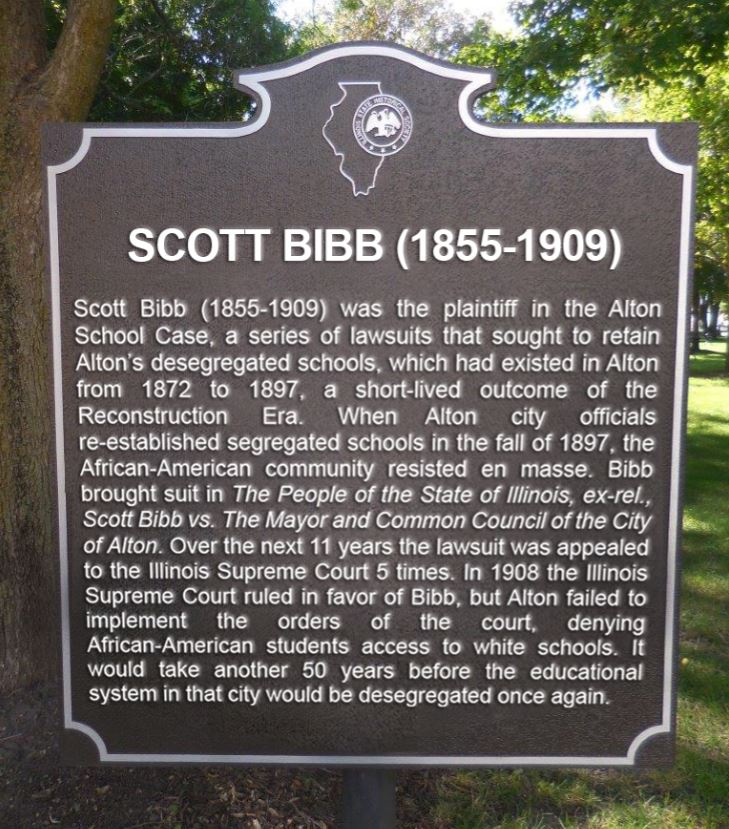 The college highlighted this important piece of Alton history in April 2015, through a collaboration with the Illinois Supreme Court Historic Preservation Commission, by hosting a History on Trial event focusing on the Alton School Cases in the Hatheway Cultural Center.

“It is an honor for Lewis and Clark to have our proposal to commemorate the courage and persistence of Scott Bibb in school desegregation approved by the Illinois Historical Society,” said Vice President of Academic Affairs Linda Chapman.

“This would not have happened without the prior work of the ‘History on Trial: Alton School Cases’ sponsored by the Illinois Supreme Court Historic Preservation Commission. The programming we offered to the community in April 2015 brought the efforts of Scott Bibb to life. Historian Dr. Shirley Portwood, professor emerita, SIUE, provided the majority of the research and the scholarship in our successful application with support from Lewis and Clark Research Librarian Greg Cash.”

The well-attended program featured a portrayal of the cases through dramatic readings by students of the DePaul University Theatre School, followed by a panel discussion on the cases themselves, as well as the themes of racial inequality and the local education system.

“We are grateful to the Illinois Supreme Court Historic Preservation Commission for bringing Scott Bibb’s place in history to life and to Dr. Shirley Portwood for her exacting scholarship on these events,” said LCCC President Dale Chapman. “We were moved to action and to remembrance.”

On the night of the event, President Chapman announced that the college would rename its Alton Community Learning Center, formerly the St. Patrick’s School, in Bibb’s honor. The Scott Bibb Center is home to many of the college’s Adult Education programs, including YouthBuild, GED, family literacy, and more.

“As a panelist on the April 2015 presentation on the Alton School Cases, I was gratified to bring this little celebrated history to the local community and the state,” said L&C Board of Trustees Vice Chair Brenda Walker McCain. “The marker assures that this history will never be forgotten.”

ABOVE: A mock-up of the marker to be installed at LCCC’s Scott Bibb Center in Alton. Illustration by Korin Fisher, L&C Media Services