Rodney Davis, Avery Bourne and Al Canal, manager of the Wildey Theatre, spoke Tuesday about the importance of Route 66 and the history of the theater, which was built in 1909.

U.S. Rep. Rodney Davis, R-Taylorville, member of the House Transportation and Infrastructure Committee, and Illinois state Rep. Avery Bourne, R-Raymond, made stops at businesses and other historical Route 66 locations in Edwardsville, Livingston, Litchfield, Carlinville, and Girard this week to highlight the economic and historical significance of Route 66. 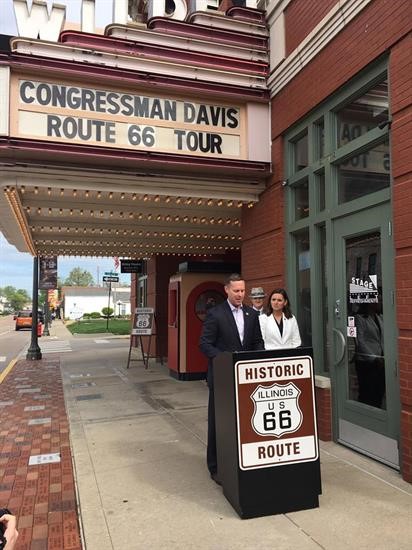 Davis, along with U.S. Rep. Darin LaHood, introduced legislation (H.R. 66 and H.R. 801) in February to establish a commission to commemorate the 100th anniversary of Route 66 and establish the route as a National Historic Trail. Bourne is the sponsor of the state House Bill 66 to establish a state Illinois Route 66 Centennial Commission.

Davis and Borne met with local mayors, business owners, and community leaders at each stop and plan more of the same on Wednesday.

“I am proud to have America’s most iconic road run through the middle of my district and it’s important we celebrate its history,” said Davis in a statement. “From providing thousands of jobs during the Great Depression to transporting equipment and supplies for World War II to becoming a symbol of freedom and independence in the 1950s, Route 66 has been the ‘road to opportunity’ for millions of Americans throughout history and it continues to be a great economic driver for our state. Historical Route 66 and the businesses located along it were responsible for thousands of jobs and millions in state and local revenue to support our communities.”

“The Mother Road is not only a rich part of our area’s history, it also offers huge economic opportunities for our rural communities along Route 66,” said Bourne. “I am proud to join Congressman Davis in highlighting some of the local gems along Route 66, and I will continue to work in partnership with local, state, and national groups to support development and restoration efforts along the Route 66 corridor.”

Also advocating for the legislation and the tour is Bill Thomas, chairman of Route 66: The Road Ahead Partnership.

“Designating Route 66 a National Historic Trail was one of the most positively supported ideas raised at the series of Route 66 Collaboration Workshop meetings facilitated by the Road Ahead Partnership during the summer of 2015,” said Thomas. “These meetings were designed to solicit feedback/input from Route 66 stakeholders across the country regarding the proposed mission, outcomes, and goals of the Road Ahead Partnership. It is exciting to see the idea of Route 66 being designated a National Historic Trail take this major step forward. It is equally exciting to begin work on plans to celebrate the 100th anniversary of the Mother Road in 2026. Many thanks to Representatives, LaHood, Davis, and Napolitano for their leadership on behalf of Route 66.”

Davis will continue the tour Wednesday along with LaHood and state Rep. Tim Butler with stops in Sangamon, Logan and McLean counties.

Route 66 economic impact for 2015, according to the U.S. Travel Association