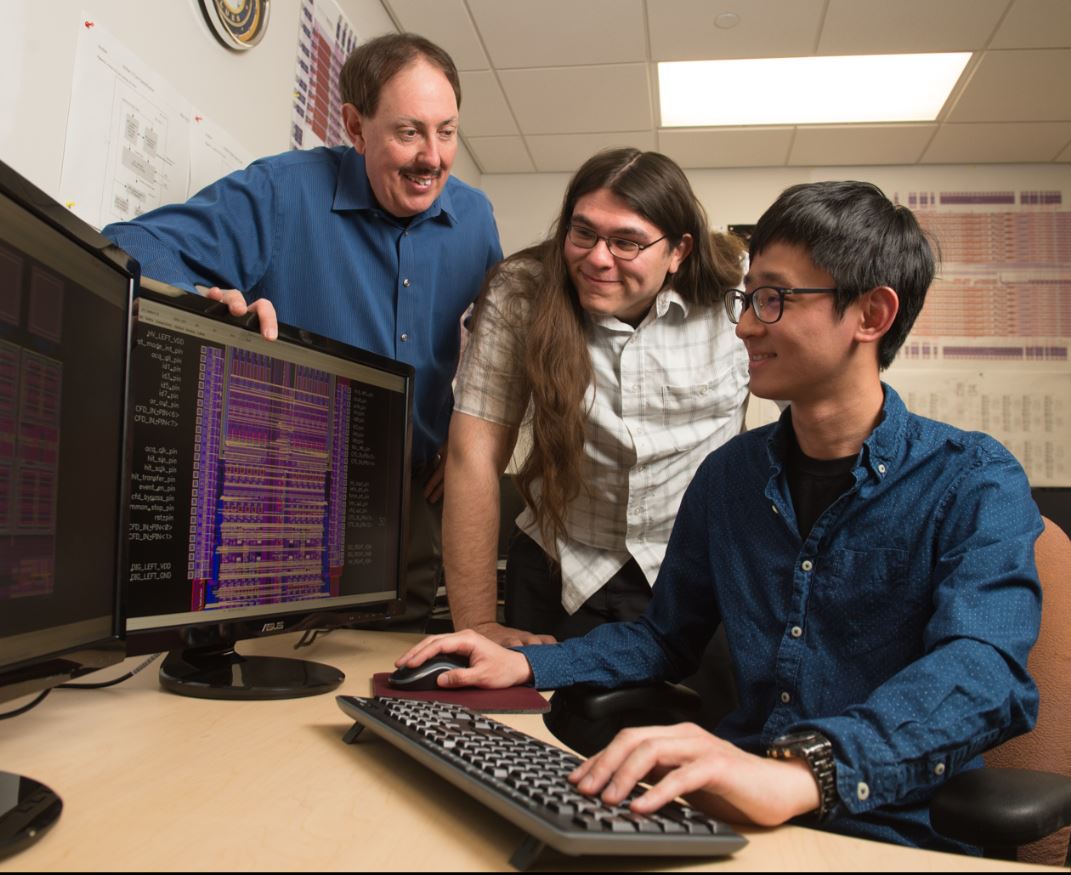 SIUE graduate student Pohan Wang, of Taiwan, is seated in the research lab, with fellow student Bryan Orabutt, of Springfield, and Dr. George Engel (back), looking on.

The National Science Foundation has awarded Southern Illinois University Edwardsville a $204,565 grant through its Major Research Instrumentation program for a project under the direction of principal investigator George Engel, PhD, professor in the School of Engineering’s Department of Electrical and Computer Engineering.

The award supports Engel and his graduate students’ research involving the development of custom microchips that are used in experiments conducted by physicists from Washington University, Texas A&M, Florida State University, and several other universities.

The integrated circuit design conducted in Engel’s research lab involves extremely detailed work that results in the creation of tiny, yet powerful, microchips that are approximately 5 by 7 millimeters in size. The chips are capable of replacing huge racks of electronics that used to be required to conduct these types of experiments.

“This is a two-year grant, that really has three parts,” Engel explained. “We have promised to add features to two existing chips that we previously created. One chip, able to identify the type of radiation being detected, can be potentially used in handheld radiation monitors for first responders. The second allows physicists to obtain extremely precise energy measurements. It can count as little as 3,000 electrons.

“Finally, we’re working on a new custom chip, designed to be used in conjunction with the aforementioned chip which can determine the type of radiation present. The additional chip will greatly reduce overall instrument size. The ultimate goal of the research project is to understand the origins of the universe.”

As a teacher-scholar, Engel consistently involves graduate students in his research and instrument development activities.

Currently, master’s candidates in the electrical engineering program Bryan Orabutt, of Springfield, and Pohan Wang, of Taiwan, are involved. Their hands-on experience will make them highly prepared for the professional industry upon graduation.

“The reason our students are in high-demand in industry is because they have the opportunity to work on a complete chip,” Engel said. “They’re able to hit the ground running, because they have gone through this experience first-hand.”

The design and fabrication of the microchips involves complex attention to detail and
hours of careful work.

“If you look at a magnified plot of a microchip, you can see there are about 100,000 components on it,” Engel explained. “Everything has to be specified by us. There are wires that have to be placed on a die to connect the transistors that we’ve drawn. One of the wires is probably 1/25 the diameter of human hair. It’s extremely intricate.”

“We anticipate the enhanced version of one of our chips will go into fabrication this summer,” he added. “The files will be transmitted to the West Coast, then the fabrication will occur in Idaho, then the parts will be sent out for packaging. When they return to us about three months later, we take those parts and integrate them onto a printed circuit board and assemble the complete instrument.”

According to Engel and his graduate students, the work fits their passion for electronics, with the added bonus of having a significant impact on research and development.

“What really is quite gratifying is that these chips, while initially intended for use in an experiment alone, may perhaps find use in instruments used by first responders,” Engel said. “This work has turned into something much bigger than I originally thought and that is incredibly exciting.”

– From the Illinois Business Journal via SIUE