By MARK TURNER and MIKE RILEY
This year’s edition of the Leadership Council’s Market Review provides an overview of the critical business investments and projects that continue to grow and strengthen the economy of Southwestern Illinois. 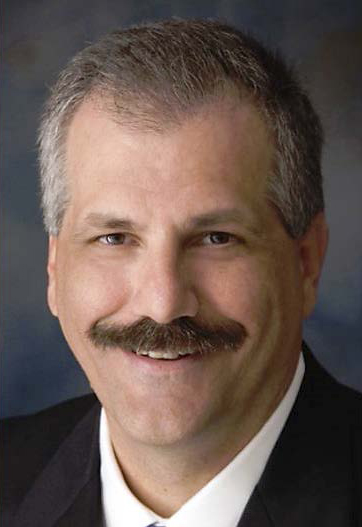 As the years go by, our goal has remained the same in “Uniting the Region for Growth” and also to highlight special contributions the business community has made in generating a positive impact on the region. Southwestern Illinois is the second-largest population center in the State of Illinois and is a great place to live, work and raise a family.  Madison and St. Clair counties account for approximately 77 percent of the region’s population. Therefore, both counties have a tremendous impact on the development of the entire region. This report makes it clear the future looks very bright for Southwestern Illinois as our region continues to create new opportunities for all businesses and residents living in our communities. 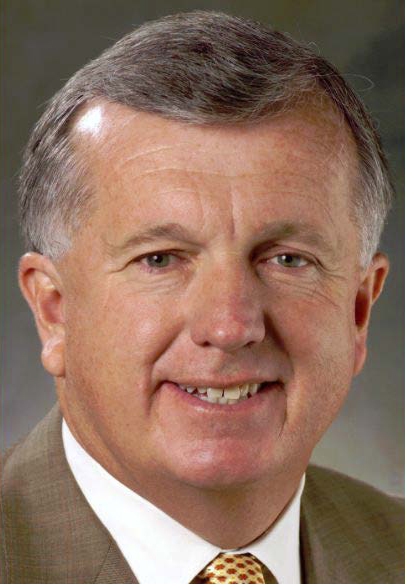 There are several projects highlighted in this year’s report that will play a pivotal role in shaping the region’s economy for many years to come. Among the essential projects under construction in 2015-2016 was the New Madison South Harbor Project and the continued restoration of the American Bottoms levee system. Both projects are poised to attract new business and jobs to the region, lead to increased production, create cost effective transportation capabilities, and demonstrate why businesses should view Southwestern Illinois a prime economic development location.
The Leadership Council is deeply committed to long-term workforce development in creating a talent pipeline of world class skilled, work ready and productive employees. To enable this process, the Leadership Council continues to take a leading role in coordination with strategic partners in building awareness of career options in science, technology, engineering, and math-related fields through its Manufacture/Craft your Future Campaign and also seen in other investments in education facilities, such as new infrastructure and improvements. Southwestern Illinois will continue to invest in youth and entrepreneurial businesses serving as the region’s next group of leaders and workforce.
Investments involving Scott Air Force Base along with notable investments regarding our healthcare sector remain a priority in Southwestern Illinois.  Continued investments in office buildings, senior housing developments and the hospitality sector are on the rise. In this edition of the Market Review, we take a look at some of the exciting investments that have happened in each of these areas making us feel optimistic about the future.
A variety of projects have been completed in Southwestern Illinois in 2015/2016, paving the way for economic expansion in the region for many years to come. The completed $23.5 million FedEx Distribution Center located in Sauget is capable of processing 10,000 packages an hour. Not only is the completion of this project creating 175 new full- and part-time positions, but will serve as a model of why businesses should expand into Southwestern Illinois.
Other stand out projects completed in 2015/2016 include the completion of the $8 million Roxana Water Treatment Plant project. The City of O’Fallon was proud to welcome the newly completed $5.8 million Fire House & Parks Maintenance Facility. Alton Memorial Hospital completed its $2 million expansion of its Women’s Health & Childbirth Center, providing an essential service to the families of Southwestern Illinois. The $4.5 million completion of the Mannie Jackson Center for the Humanities in Edwardsville has the future potential to impact real social change in the community.  These completed projects improve the lives of our residents and ensure Southwestern Illinois is a healthy and safe place to live.
2015/2016 was also an important year for the completion of education projects. Three new schools opened in 2015-2016, including the completed $30 million Father McGivney Catholic High School, $17.5 million Wingate Elementary School, and $4.1 million Maryville Christian School. Southwestern Illinois College also expanded their campus by adding the newly completed $19.1 million Liberal Arts Building. Leaders of the community know how important the youth community is to the future of Southwestern Illinois, therefore it is critical to provide them with every opportunity to learn in state-of-the-art, high tech facilities and work in the region.
Madison and St. Clair Counties have seen new investments of nearly $600 million on projects under construction in 2015/2016. We greatly appreciate and value these business investments that continue to drive robust economic activities within Southwestern Illinois.
HSHS St. Elizabeth’s Hospital is building a $300 million new hospital and Memorial Hospital East at $130 million both will continue to impact both the health of the community and economy. Two police stations were under construction in 2015/2016: including the $18.5 million Belleville Police Department and the $7.8 million Wood River Police Department. These community safety projects will enhance community protection for the people of Southwestern Illinois. 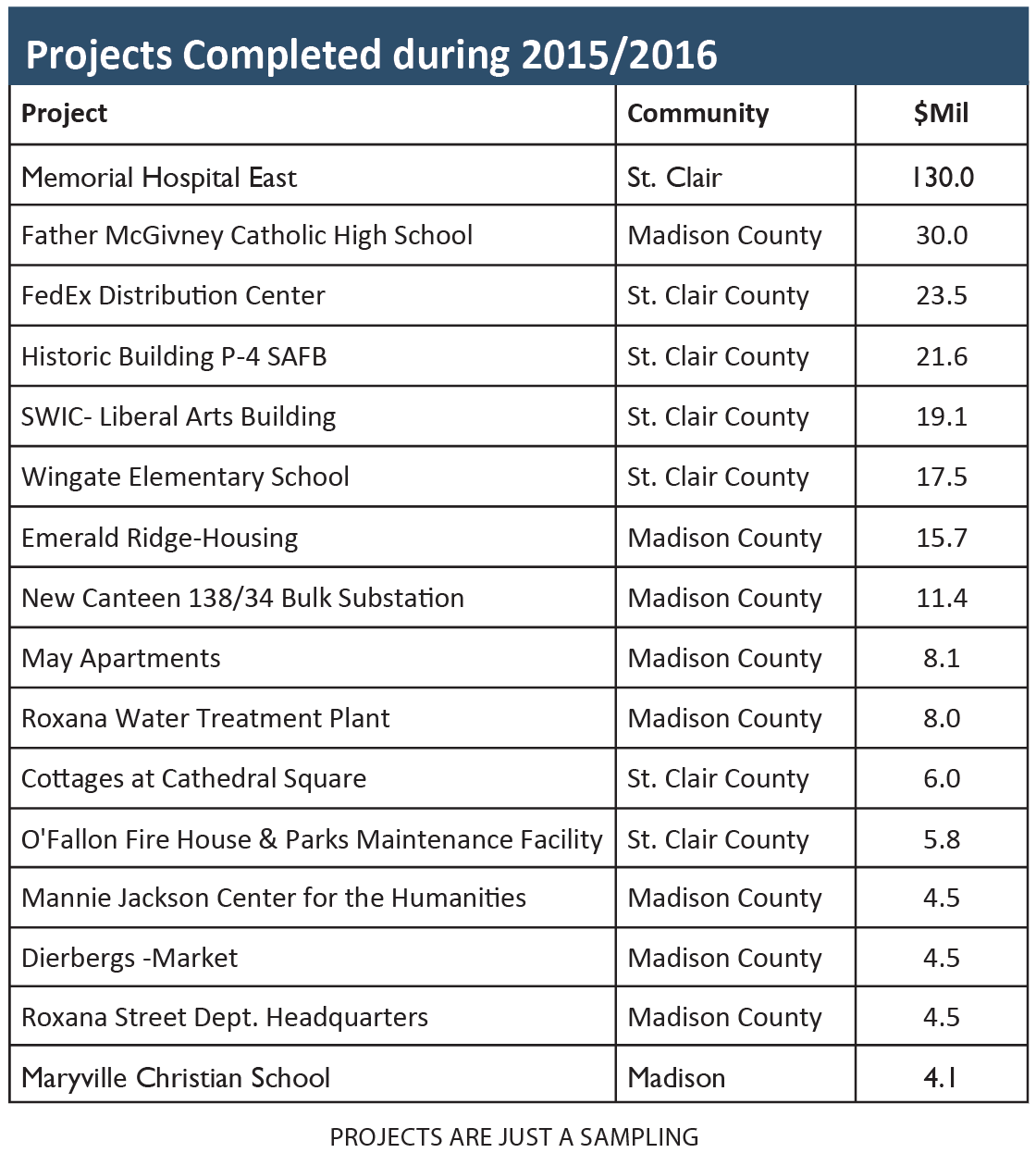 The $50 million New Madison South Harbor and the $25 million Alton Regional Multimodal Transportation Center projects provides local business growth and led to new job creation. Also, the addition of Amazon added over 1,000 new jobs and added to the region’s growing business community. Southwestern Illinois is becoming one of the top regions for transportation and supply chain distribution of goods nationwide.
The newly announced projects in the pipeline continues to verify that the Southwestern Illinois region is growing and a great place to do business. If you look geographically, Southwestern Illinois is situated in the midsection of America and serves as the central corridor for vigorous economic activities both now and into the future. This is why our region has been a trading post for hundreds of years. Multimodal transportation modes can easily connect our region with 50 percent of the U. S. buying power in one short day’s travel. This combined with all major modes of transportation (river, road, rail, air, and pipeline) converging in our region, thus enables a premium supply chain distribution location for domestic and international markets.
Mark Turner is president of the Leadership Council Southwestern Illinois and president and CEO of Memorial Hospital. Mike Riley is chairman of the Leadership Council and president of Professional Therapy Services. The full 2016 Market Review and Investment Update can be viewed at www.leadershipcouncilswil.com