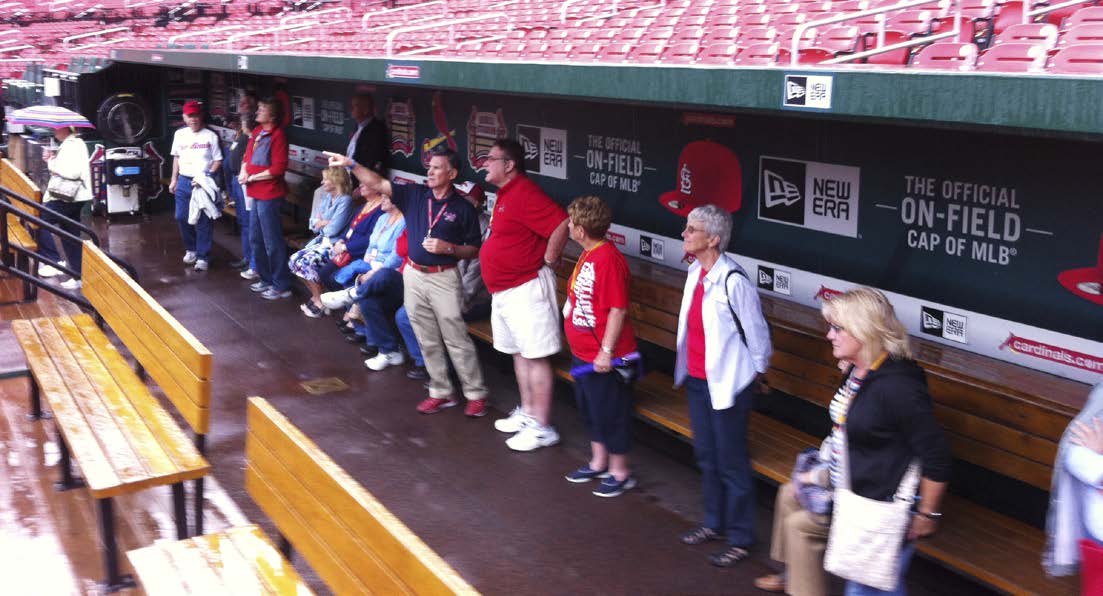 By DENNIS GRUBAUGH
ALTON — Pamela Kaizer follows a routine when she wraps up each new adventure in Senior Services Plus’ travel program.
The travel coordinator asks participants what they thought of their trip, hoping to gain feedback for later. She also thanks them on behalf of others who couldn’t make the journey.
Profit from the travel program is channeled back to pay for Meals on Wheels, which has been hit hard by state cuts. The irony is not lost on Kaizer: The people who travel with her are helping those who can’t travel at all.
“I thank them for that,” she said. “If we’re on a bus or at an airport coming from out of town, they are my captive audience. I thank them first for traveling with us; then I thank them on behalf of all the people who couldn’t make the trip.”
For the past three and a half years, Kaizer has been helping to build the travel program in popularity and participation. In November, she landed the travel business of First National Bank of Staunton, which has a 2,200-member travel group called the Goldennaires Club.
The nine-branch bank was looking for someone to help after the former, longtime coordinator of its program died. Bank officials contacted Kaizer about Senior Services Plus and invited her to make a presentation. It was such a good rapport that Kaizer asked the bank if they would like to route their business through SSP’s travel program.
“Now they do all their trips through us,” she said. “The transition has been very good, and the response from their branches has been overwhelming. The branches are sending people straight to us because they are getting such demand.”
Some of the branch locations will serve as pickup points on certain trips.
SSP’s Executive Director Jonathan Becker said it was a good turn of events.
“It’s a good partnership with the Staunton bank. We’re always reaching out. Any other banks that would be interested, we provide a quality service,” he said.
Becker estimated that $10,000 to $20,000 is generated by the agency’s travel program for Meals on Wheels. Also generating money are SSP’s School House Grill restaurant, its catering program and its wellness program.
A number of day trips, motorcoach and overseas travel options are available through the senior agency.
Kaizer says she’ll do anywhere from 18 to 20 day trips a year, involving different activities levels and price points, to capture as many people as possible. Trips go to venues in or not far from St. Louis, like the Fox Theatre, or trips along U.S. Route 66.
Then there are the more extended trips, by motorcoach, that run from seven to 10 days. This year’s destinations include Myrtle Beach, S.C., Washington, D.C., Mackinac Island in Michigan, Niagara Falls, national parks in the Southwest and others.
Multiple overseas trips were available in 2017. One to Italy was just concluded. One to Ireland is planned in November. A river cruise down the Rhine is also planned.
The trips are designed for the public with no age limits, although participants must be at least 21.
“Most senior trips you expect people to be 60 or 65 years and older, but I like to encourage multiple generations to travel together. It serves many purposes, including shared memories,” Kaizer said.
One woman who travels with the groups is 100 years old.
Some of the day trips allow participants multiple meal options, which gives them flexibility on how much they spend on their outing.
“The main thing is people want somebody to take care of the planning and to get them there. We can do a curbside dropoff for the restaurant they go to,” she said.
Some people will sign up for many day trips a year.
Kaizer plans the year’s itineraries and updates it occasionally depending on requests and reservations.
Travelers come from throughout the region.
Kaizer goes on almost all day trips and all of the motorcoach trips, serving as the chief coordinator.
“I’m the song and dance lady on the bus,” the affable Kaizer said. “I’ve got to get you there, get you back, keep us on schedule, tell you what’s going on.”
For trips involving flights she utilizes tour companies who have managers who can help take care of the travelers’ needs. With some groups, one coordinator can’t take care of it all.
Motorcoaches are provided by a variety of vendors
Vandalia Bus Lines has been used for some of the extended motorcoach trips. Another is Doc and Norm, based in Columbia, Mo., and with a hub in Hamel.
Kaizer is open to speak to any group that wants to listen.
“I go to churches and clubs and different organizations. Travel is a very easy thing to talk about. Everybody wants to travel,” she said.
For more information contact her at (618) 465-3298 or pkaizer@seniorservicesplus.org.