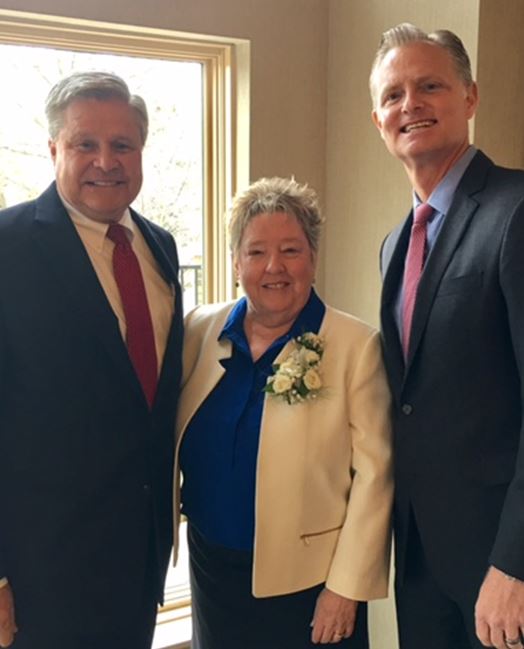 A grant of $10,000 funded by the William T. Kemper and Commerce Bancshares foundations was given in Hatch’s name to CASA of Southwestern Illinois.

Tom Harmon, chief operating officer of Commerce Bank St. Louis, presented the service award and grants, saying, “Ann’s commitment to our community is inspiring and provides an example that one person’s efforts can and do make a difference.”

Hatch grew up in Belleville. Upon graduating from the Academy of Notre Dame High School, she attended Saint Louis University where she earned a Bachelor of Science degree in medical technology and, subsequently, a law degree. She has managed a successful law career for nearly 40 years and is currently a managing partner of Herzog Crebs, and is head of its asbestos and toxic tort practice.

Over the years, Hatch bridged her legal expertise and professional network to call attention to and leverage the resources needed to combat challenges facing her community, Commerce said.

She is a member of the St. Clair County Bar Association, where she served as its first female president, a member of the Public Relations Committee and assisted in the founding of its Pro Bono Project. She has been involved in the Illinois State Bar Association as well where she served as chair of the Fellows of the Illinois Bar Foundation, the charitable arm of the ISBA.

Hatch has also been closely involved with Land of Lincoln Legal Assistance Foundation. As a community volunteer, she served on the board of CASA of Southwestern Illinois for 20 years and is a member of the Blessed Sacrament St. Vincent de Paul Society.

Hatch selected CASA of Southwestern Illinois as the grant recipient for her Community Service Award. CASA strives to address the overall well-being of abused and neglected children in the juvenile court systems of St. Clair, Madison and Monroe counties of Illinois. The organization recruits, trains, supervises and supports volunteers who serve as the “voice” for vulnerable children. CASA volunteers prevent these children from languishing in the foster care system, while restoring stability and finding placement in permanent homes. More than 500 children annually benefit from the voice of a CASA volunteer.

The Commerce Bank Community Service Award is dedicated to recognizing individuals who make an exceptional contribution to their community and the people who live there. A special grant given in the name of the honoree is awarded to the nonprofit agency of the honoree’s choice. The potential award recipients are identified through a thoughtful consultation process with groups that include community and civic leaders. Commerce Bank officers and advisory board members then select the Community Service Award recipient.