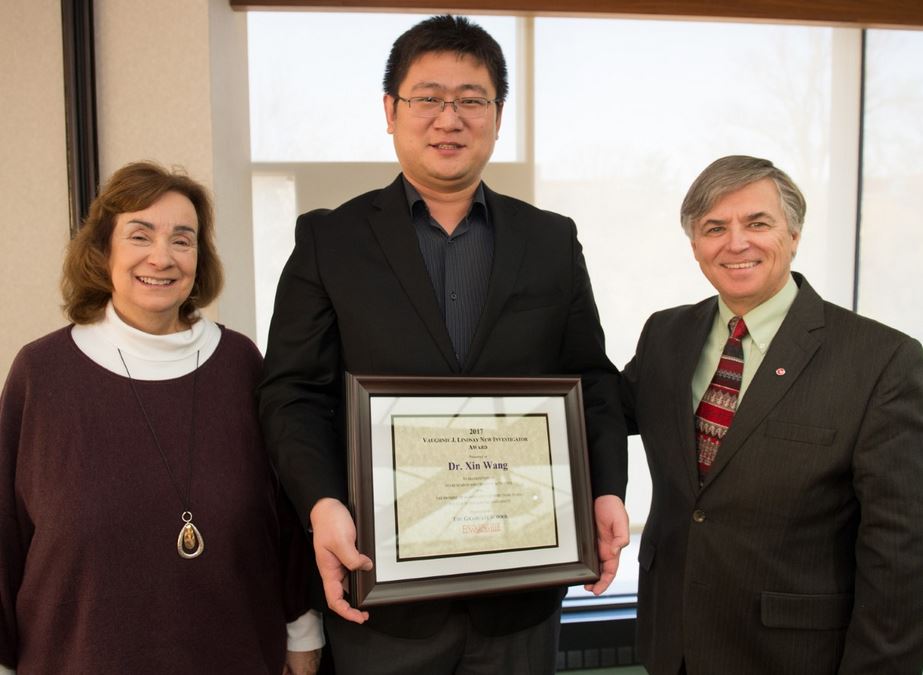 Xin Wang, PhD, assistant professor in the Southern Illinois University Edwardsville School of Engineering’s Department of Electrical and Computer Engineering, has been recognized with the 2017-18 Vaughnie Lindsay New Investigator Award.

Chancellor Randy Pembrook presented the award during a special reception in the Morris University Center.

The award honors tenure-track faculty members whose research and creative activities have the promise of making significant contributions to their fields of study, their respective schools and departments, and SIUE as a whole. Wang will receive a combined $12,500 from the SIUE Graduate School and the School of Engineering to be used in a one-year period.

“I was incredibly honored to attend the chancellor’s reception and am grateful to be the recipient of the Vaughnie Lindsay New Investigator Award,” said Wang. “It is a privilege to be placed in such distinguished ranks as those of the past honorees, who have made significant discoveries and great contributions to advancing research studies in various disciplines, and all of whom I have long admired and respected.”

“Dr. Wang’s research has the capacity to impact his field of study and clearly exemplifies the spirit of the Vaughnie Lindsay Award,” added Jerry Weinberg, PhD, associate provost for research and dean of the SIUE Graduate School.

Wang’s project, “Ushering in the Smart and Autonomous Power Converters for Utility Power Grid,” proposes an innovative method of designing power converters, which will keep the power grid stable even when power is coming from solar, wind and other forms of distributed power generation resources, which directly connect to the grid through a converter.

“As more renewable energy resources supply electrical power to the utility grid, there is an emerging trend of deploying smart and autonomous power converters in the near future, which is one of the best ways to maintain a stable power grid,” Wang explained. “Featuring advanced power electronics and automatic control technologies, the proposed smart and autonomous power converter technology will provide a better solution for the next generation smart power grid.”

Stephen Hansen, PhD, faculty emeritus, established the Lindsay Research Professorship Endowment that funds the award in honor of Lindsay, who served as graduate dean from 1973-1986.

Lindsay was responsible for creating much of the infrastructure that supports faculty research and scholarly activity at SIUE. Faculty and emeriti faculty at the time of the award’s conception donated the funds to endow the award.

Those wishing to help support new investigators through the award may make a donation to the Graduate School section of the endowment at siue.edu/give/.