EDWARDSVILLE – The blueprints for Edwardsville Frozen Foods, at 246 N. Main St., were first drawn up in 1947 and now – 70 years later – that blueprint will be updated with the sale of the business to new owners, Bob Keyser and Jeff Merkel, both from Edwardsville. 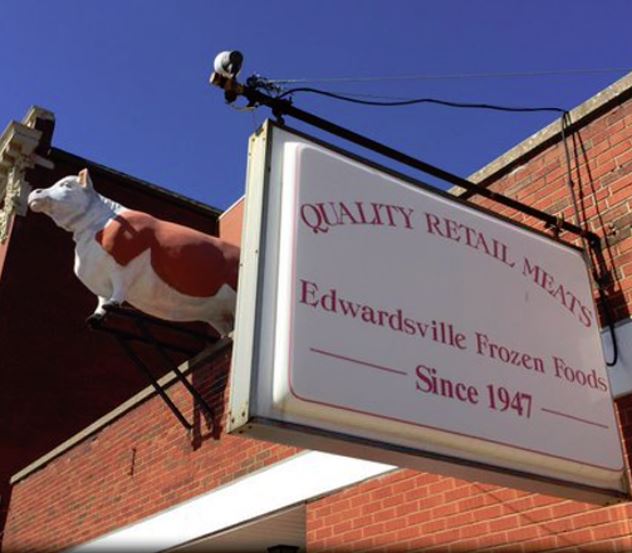 Longtime residents, they grew up going to the Wildey Theatre and the butcher shop next door with the iconic “Herbie the Hereford” cow on its roof. Initial plans entail keeping the existing core business of aged beef, pork, chicken, and wild game processing, but eventually adding a “farm-to-table” concept that will complement the longtime butcher trade by creating a hub that people can come to and pick up ultra-fresh local produce, dairy, cheeses, fruit and even wild-caught seafood.

Longtime employee, Bruce Krome, also born and raised in Edwardsville, will manage the butcher business, which will be rebranded as the Goshen Butcher Shop. He will be assisted by Russ Martin, a 20-year employee journeyman meat cutter responsible for butchery operations, deer processing as well as summer sausage, bratwurst, and recipes for seasonings.

A new endeavor to create fresh carry-out meals and private catering will also be added through the hire of noted St. Louis chef, Ben McArthur, formerly with J. McArthur’s and Balaban’s restaurants, among others, to work with Krome in managing the carry-out and catering business.

However, the signature staple of service and quality that the business was built upon will continue to be the company’s hallmark.

Owners Ed Hall and Fred Schulte bought the business in 1980 from Carl Brueggeman, after working there since they were both 15, starting part-time as “clean-up boys,” and working full-time through a three-year apprenticeship learning the trade. They mortgaged their houses and “whatever they had to” for the down payment, paying off those mortgages two years later.

Hall and Schulte only made a few changes under their ownership, one of which was the creation of Bratwurst in the mid to late ‘80s. “We gave away more than we sold that first year,” recalls Hall, “but now we’re known for that Bratwurst.”

That, and changing the formula for their summer sausage to all beef and making beef sticks, which are another big seller, “especially to send overseas to the troops in Iraq,” said Krome, who has worked at the business since 1972, starting his apprenticeship in 1974 under Ernie Jackson and Roy Spitze, the same men who taught Hall and Shulte.

Little else has changed over the last 50 years, though – even the original locker keys and office furniture that Brueggeman used is still in the same place. Both owners say it’s time for someone else to take over the reins and “do the heavy lifting” so they can retire, and they’re happy that the business is going to local men who care about its history and have ties in the community.

Hall and Schulte, who has also been the Edwardsville Township clerk for almost 16 years, will stay on as consultants for the first year and are excited to see the new owners update the business, which they have always operated without a computer or point-of-sale system.

“We want it to succeed and go to the next level,” Schulte said. Krome concurs, noting “I’m just a meat cutter, but change is an improvement and I’m excited that Jeff and Bob are going to make some additions while keeping the main business the same. I want our customers to be happy and I think they will be once we get things going. If not, they need to let me know.”

Keyser, who now lives in Boca Raton, Fla., and Merkel, of Edwardsville, said an update of the interior space will take place over the next several months, with no plans to close or shut down for construction purposes other than normal operating hours. Those revisions will include restoring the historic look of the building, featuring new storefront windows similar to the originals, to better fit into the look and feel of the Edwardsville Downtown Historic District.

Merkel is also in the process of creating partnerships with various local Land of Goshen Community Market farmers and other local partners to cross-market products, thus increasing the depth of the company’s culinary retail offerings for the foodie haven that Edwardsville has become.

“Ultra-fresh, ultra-local and ultra-clean are the main pillars of the new concept, which we plan to grow into a full-scale farm-to-table market,” he noted. “That, combined with our commitment to continue the core business and maintain the service and quality they are known for, is what we want to bring to the community.”

And Herbie the Hereford? He’s here to stay.