A Belleville-based doctor has high praise for the stereotactic radiosurgery technology being used at the HSHS Neuroscience Center to target cancer safely, efficiently and accurately. 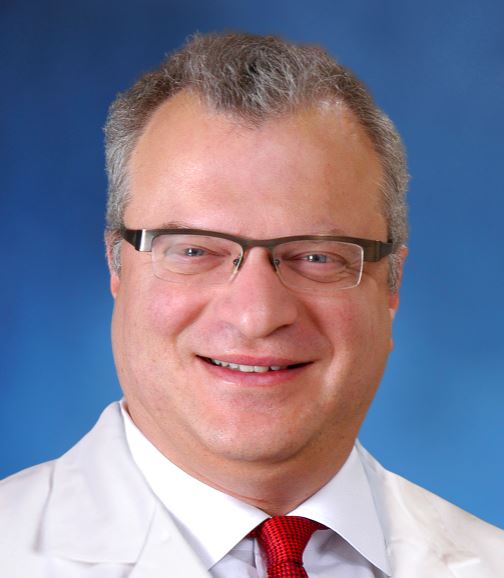 Stereotactic radiosurgery, or SRS, offers new levels of care and hope to patients who have been diagnosed with brain or spinal cancer.

“Stereotactic radiosurgery is a state-of-the-art technique that allows definitive treatment of the patient’s brain and spine cancer,” said Nicholas Poulos, MD (left), a board-certified neurosurgeon with the HSHS Neuroscience Center in Belleville. “The advanced SRS technology precisely targets the tumor area more safely, efficiently and accurately than other options. The beams are perfectly shaped to irregular objects, like a tumor, with minimal exposure to surrounding healthy tissue.”

According to the American Brain and Tumor Association, when radiation is used to treat brain tumors, the goal is to kill the tumor cells, or at least slow or stop tumor growth, while limiting adverse effects on normal tissue. Poulos explains that SRS is most commonly used to treat small brain and spinal tumors (both benign and malignant). Stereotactic radiosurgery allows precisely focused, high-dose radiation beams to be delivered to a small, localized area of the body.

According to Dr. Poulos, the benefits to the patient and family are significant.

“Unlike open surgery, SRS is relatively painless and noninvasive. Oftentimes the SRS procedure is completed in a single outpatient treatment lasting less than an hour. From a patient standpoint, it is very comfortable, with fewer side effects. Because SRS is available here locally, patients are back home with their loved ones faster.”

Barbara Phillips is a 79-year-old wife, mother, and grandmother. A 50-year resident of Freeberg, Ill., she and her husband, Ron, are enjoying retirement to the fullest. In addition to quality time with family and friends, they enjoy working for a local auction company. Ron is an auctioneer and Barbara serves as an auction clerk.

One evening at an auction, Barbara sensed something wasn’t right. “I was writing information into the auction record book, and suddenly I was scribbling and couldn’t read my own writing. After several attempts I told Ron, ‘I can’t do this.’” Ron decided to rush Barbara to the hospital.

Diagnostic tests revealed that Barbara had some ‘hot spots’ on her brain and chest. Three large tumors in her brain were of particular concern. Dr. Poulos was recommended and called immediately. Poulos performed the six-hour surgery and removed three golf ball-size tumors, followed by physical and occupational therapy. Following therapy, the next step in Barbara’s care plan called for SRS.

“The treatment from start to finish was only about 20 minutes,” said Barbara. “I was comfortable throughout the entire procedure. There was no pain or side effects, and afterward I haven’t had to have chemotherapy.”

“If it wasn’t for Dr. Poulos and his team and having them so close, I wouldn’t be alive today,” said Barbara.

“To me, it is a godsend.” Ron added, “Barbara has made great progress and now we’re enjoying time together as a family again. We’re all very happy.”

Poulos concluded, “ln the world of cancer, every patient is an individual, not a number. SRS gives us a new powerful modality and brings the latest technology to those we care for. It truly takes care and hope to the next level.”

—      From the Illinois Business Journal via HSHS Medical Group