SPRINGFIELD – Chief Nicholas Gailius has been named the 2017 Chief of the Year by the Illinois Association of Chiefs of Police. 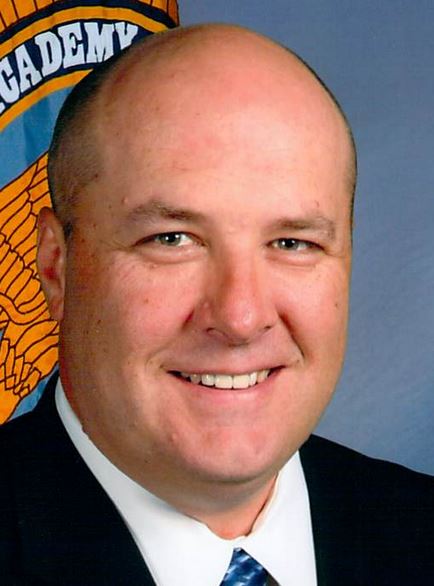 The award, to be given for only the second time, is for leadership in law enforcement, leadership in his own police department, and service to the association.

Gailius will receive the award April 21 during the association’s Annual Awards Banquet in Oak Brook, Illinois. He was selected by the association’s Board of Officers from a very strong pool of nominations from different parts of Illinois.

Wojcicki first announced the award last week during the Illinois Criminal Justice Summit in Mt. Vernon, and the 300 attendees gave him a rousing standing ovation. Gailius is a past president of the Southern Illinois Police Chiefs Association.

Gailius has been the Fairview Heights police chief since 2010. He got started with the department as a Police Explorer at the age of 14 and has served the city in which he was born and raised ever since. Gailius has been a dispatcher, patrolman, undercover agent, detective, sergeant, Emergency Services and Disaster Agency coordinator, lieutenant, assistant chief, and chief of police.

He has been active in many regional law enforcement initiatives, in the association’s legislative advocacy efforts, and in his home community. He is chairman of the ASSIST 14 board, which advises on regional police training matters. He is a member of the International Association of Chiefs of Police and the FBI National Academy Associates. Gailius is also a member of the Greater St. Louis Area Major Case Squad Board of Directors as well as a member of the Southwestern Illinois Law Enforcement Commission Board of Directors. He is also a past president of the Rotary Club of Fairview Heights.

The Illinois Chiefs also recognize Gailius’ leadership on the east side of the Mississippi River after the major disruptions and threats to public safety just across the river in Ferguson, Mo., in the fall of 2014. Gailius was called upon to lead the Unified Command Center of local chiefs, who in turn collaborated thoroughly with federal and state agencies.

Said the ILACP’s Wojcicki: “It is unbelievable how many times the words Fairview Heights, Fairview Heights PD and Fairview Heights Chief are mentioned in the action report written by the U.S. Attorney for Southern Illinois after the Ferguson situation finally settled down. It is clear that Gailius and his department and community provided very important leadership during a most trying time for law enforcement.”

Gailius also has hosted training in Fairview Heights for his state association, most recently on critical topics such as body cameras and use of force. Among his local accomplishments cited by the Illinois Chiefs are:

• Creation of the city’s first “Volunteers in Police Service.”
• Co-founder of Fairview Heights Youth Initiative group mentoring project.
• Creation of a cadet program called Metro-East Cadets of Policing, which reaches out to youth at a young age, gets them interested in law enforcement, and eventually increases the pool of minority candidates interested in law enforcement.
• Creation of the Neighborhood Enforcement Officers program to improve police/ neighborhood communications.
• Initiating the T.R.A.C.E.R. unit (Targeting Residential and Area Concerns through Enforcement and Responsiveness) hot-spot policing team.
• Spearheading community outreach with diverse leaders and community representatives to strengthen the ties between minorities and police in Fairview Heights.
“Gailius clearly is a great leader well-versed in community policing, which is not a new concept in law enforcement but is gaining renewed attention nationwide since the Ferguson uprising,” said ILACP President Steven Casstevens, who is also police chief in Buffalo Grove, a Chicago suburb. “We honor the fact that he is not only an extraordinary chief, but also a mentor to many other law enforcement leaders and highly respected in the region where he lives and works.”

Gailius has an MBA degree from Lindenwood University and a bachelor’s degree from Western Illinois University. He also graduated from the prestigious FBI National Academy and Southern Police Institute.

Gailius lives in Fairview Heights with his wife of 28 years, Karen. They have two children, Anna and Nicholas.

Last year’s winner of the Chief of the Year Award was Chief Timothy McCarthy of Orland Park, which is south of Chicago in Cook County. The Illinois Association of Chiefs of Police has nearly 1,300 members representing more than 450 police agencies in Illinois.

—      From the Illinois Business Journal via FHPD