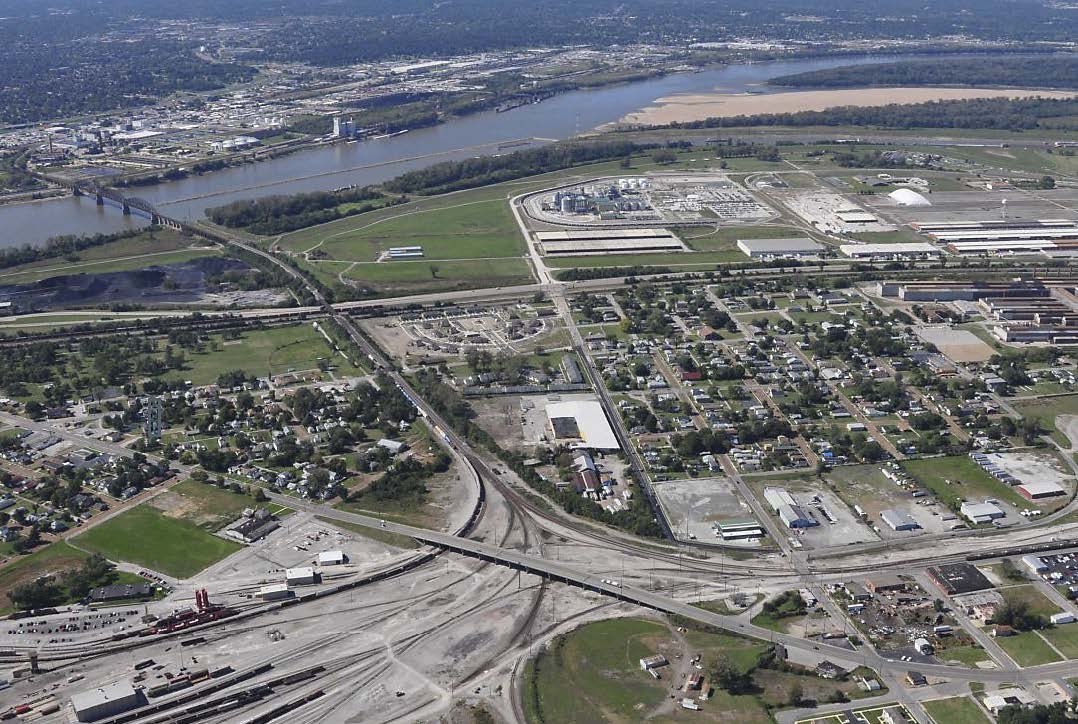 VENICE — Poised at one of the most important freight crossings in the United States, the Merchants Bridge represents a vital link for agriculture, coal and other producers and the consumers who depend on those goods.
But, without a significant overhaul in just a few years, that link will be gone, a fact that has supporters scrambling for financing to complete a project long in the works.
“It’s ranked very highly, if not the most important project, by our committee,” said Mike McCarthy, a member of Leadership Council Southwestern Illinois’ SITE committee, which reviews and prioritizes multimodal projects for the region. McCarthy is president of the Terminal Railroad Association of St. Louis, which owns the bridge.
John Nations, president and chief executive officer of the Bi-State Development Agency, which oversees the new St. Louis Regional Freightway, agrees.
“The No. 1 infrastructure project is, of course, the Merchants Bridge,” Nations said.
It is predicted that main span reconstruction would cost $210 million to $220 million, take three years and generate 1,060 construction jobs.
Leadership on both sides of the river is in sync on the need. The bridge, built in 1890 across the Mississippi River, serves both the giant railyards in Venice and similar rail services and truck lines on the north St. Louis side, but more importantly it is a gateway between east and west, sending freight across the nation.
The sole purpose behind forming the Terminal Railroad Association in 1889 was the safe, efficient and economical movement of rail freight through the St. Louis gateway, for all rail carriers, McCarthy said.
“One-hundred twenty-seven years later, we are still providing the same service to the region,” he said.
McCarthy made a substantial presentation last month at a Southwestern Illinois Senate Transportation Discussion sponsored by Leadership Council Southwestern Illinois in Belleville.
As far as a transportation hub, the region stacks up well, he said. It ranks third in rail tonnage, behind Chicago and Kansas City. It is the No. 2 rail interchange, which denotes movement between rail carriers, behind only Chicago. The network in general serves the second-largest inland port in America, which is St. Louis Port District.
There has been tremendous growth in the system the last 12 years, McCarthy said.
“Five new rail-to-barge transfer facilities that can accept unit trains and are truck capable have been built, all on the Illinois riverfront, which is the naturally dredged side of the river. Many other, existing ones have been expanded,” he said.
At one point, perhaps 10 years ago, 6 percent of the agricultural product that moved through New Orleans to international markets originated in the St. Louis gateway. Today, New Orleans port operators put that number at 30 percent.
Local rail bridges are indispensable to what has become a rapidly growing rail hub, McCarthy said.
There are 23 railroad crossings on the Mississippi, from Minnesota to New Orleans. Eleven of those touch down in the state of Illinois.
Of the six that carry 30 or more trains a day, five touch Illinois.
And two of them — the Merchants and the MacArthur bridges in St. Louis — account for 73 crossings per day, “making ours the busiest rail crossing geographically of all of them,” McCarthy said.
The Terminal Railroad’s bridges are open access, meaning they are open to any railroad that wants to use them — sharing a Mississippi River distinction with only the Huey Long Bridge in New Orleans.
That access is a major transportation safeguard, McCarthy said.

“If snow shuts down Chicago or a hurricane shuts down the Gulf crossings, the St. Louis Gateway always picks up the slack,” he said.
The Merchants is the oldest of the 23 crossings and is limited in use. Two trains can’t cross the tracks at the same time because of weight and size limitations.
Terminal Railroad Association performs double the number of federally mandated inspections to make sure the company stays on top of structural defects.
“The general consensus among bridge engineers is there is only 10 years of serviceable life left at this level if no action is taken,” McCarthy said.
Rebuilding the structure and returning it to its double-track capacity is the only alternative, he said.
All of the superstructure, the trusses that span the river, will be replaced. The piers will be improved to meet seismic standards, but they will not be replaced.
Coal is by far the largest volume of commodity that goes across the bridge, and the restrictions on the bridge illustrate the inefficiency, Nations said. The coal cars that go across the bridge weigh 286,000 pounds apiece, meaning 37,000 pounds on each of the eight wheels. But newer generation of unit cars can carry 315,000 pounds, a weight for which the bridge is not designed.
“If we lose the Merchants Bridge, if it gets decertified because of its age, MacArthur Bridge does not have the capacity to take up all that traffic. That would severely constrain the effort to promote St. Louis as a freight hub,” Nations said.
The benefits of reconstruction are many, McCarthy said.
For one, the work would position the bridge to handle the predicted 30 percent growth in the rail traffic during the next few decades.
For another, five minutes will be saved on Chicago-to-St. Louis Amtrak runs, just through the St. Louis metropolitan area.
And, expected truck-to-rail diversion of freight would save $63 million in highway damage over the next four years.
Speeding up the train traffic would also reduce the blocked crossings due to idling trains queueing up, waiting for bridge access, McCarthy said.
Terminal Railroad Association has been applying for grants over the last few years in support of a public-private partnership to fund ongoing work.
“We went out to national and local companies for letters of support. The response was amazing — very, very positive,” McCarthy said. “But the most surprising to me was the group that took the lead were the barge lines. Why is that? It’s because there are very few places in the nation where great water, great rail infrastructure served by six Class I railroads, and efficient highways all come together. Southwestern Illinois is that place.”
In 2005, because of rapid deterioration, the TRRA replaced 450 feet off each end of the bridge’s main span, a self-funded project costing $17 million.
In 2011, TRRA began the western approach replacement through a public-private partnership. Some $9 million was generated by TRRA and another $13.5 million came from an American Recovery and Reinvestment Act grant. That project will be completed in the late spring.
The east approach is being included within the scope of the remaining bridge project.
Now, the association is focusing on the main span. Last year it approved $3 million toward engineering work needed in advance of main span construction. Now, it’s putting together a construction financing package, of which Terminal Railroad will account for two thirds of the overall cost. Financing is expected to be:
46 percent, or $100 million, through a Railroad Rehabilitation & Improvement, or RIFF, loan, serviced by Terminal Railroad.
34 percent, or $75 million, from a U.S. Department of Transportation FASTLANE grant; and
20 percent, or $44 million provided by Terminal Railroad and the Class I railroads that use the bridge
FASTLANE is an acronym for Fostering Advancements in Shipping and Transportation for the Long-term Achievement of National Efficiencies.
McCarthy and Mary Lamie, the executive director of St. Louis Freightway, were in Washington last month to push the FAST LANE grant, the co-applicants for which would be Bi-State and the Missouri Department of Transportation.
The USDOT FAST LANE grant was applied for in December, and ultimately the decision rests with the office of new federal Transportation Secretary Elaine Cho, who locals have reached out to through the area’s congressional delegation.
It is the second time the FAST LANE grant has been sought. The first time was last spring and the request was rejected. Supporters asked what they could do better and resubmitted.
They are now hoping for a decision by this summer.