The Giving Back Award honors college and university administrators who go above and beyond their everyday leadership duties and give back to their campuses and communities. Brown will be featured, along with 38 other recipients, in the April 2017 Leadership Support and Giving Back issue of Insight Into Diversity.

“My thanks to Senior Associate General Council Phyleccia Reed Cole for nominating me for and finding value in my work to promote, embrace, and support diversity and inclusion at SIUE,” Brown (left) said. “This work is in line with my life’s purpose and commitment to social justice, equality, and an inclusive world. It is not every day where both your personal and professional values for humanity meet, and my journey at SIUE has allowed that to happen. Thank you, INSIGHT Into Diversity for celebrating our commitment.”

Brown joined the SIUE faculty in 1995 as an assistant professor of social work in the College of Arts and Sciences. She was named assistant provost for faculty development and diversity in 2007. In spring 2010, she was appointed as interim executive director of the SIUE East St. Louis Center and accepted an appointment as executive director/associate provost in January 2011.

Brown returned to the SIUE campus as associate provost for diversity and inclusion in October 2012. In August 2014, she was appointed associate chancellor as the Office for Institutional Diversity and Inclusion was moved within the Office of the Chancellor.

Giving Back Award recipients were nominated by their colleagues and selected by Insight Into Diversity based on their outstanding demonstration of social responsibility; involvement with students, faculty, staff and the community; and commitment to serving underrepresented populations. Each honoree is recognized for his or her passion, dedication, and support for diversity and inclusion.

“The Giving Back Award is being awarded to leaders of institutions of higher education who exemplify what it truly means to give back to others,” says Holly Mendelson, publisher of Insight Into Diversity. “These administrators are role models, and we honor their efforts to promote diversity and inclusion on their campuses and in their communities.”

A call for nominations for the Giving Back Award was announced in October 2016. Award recipients include administrators of both community colleges and baccalaureate-granting institutions.

For a complete list of the 2017 Giving Back Award recipients, visit insightintodiversity.com. 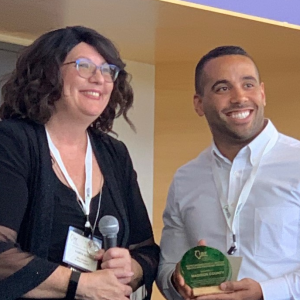